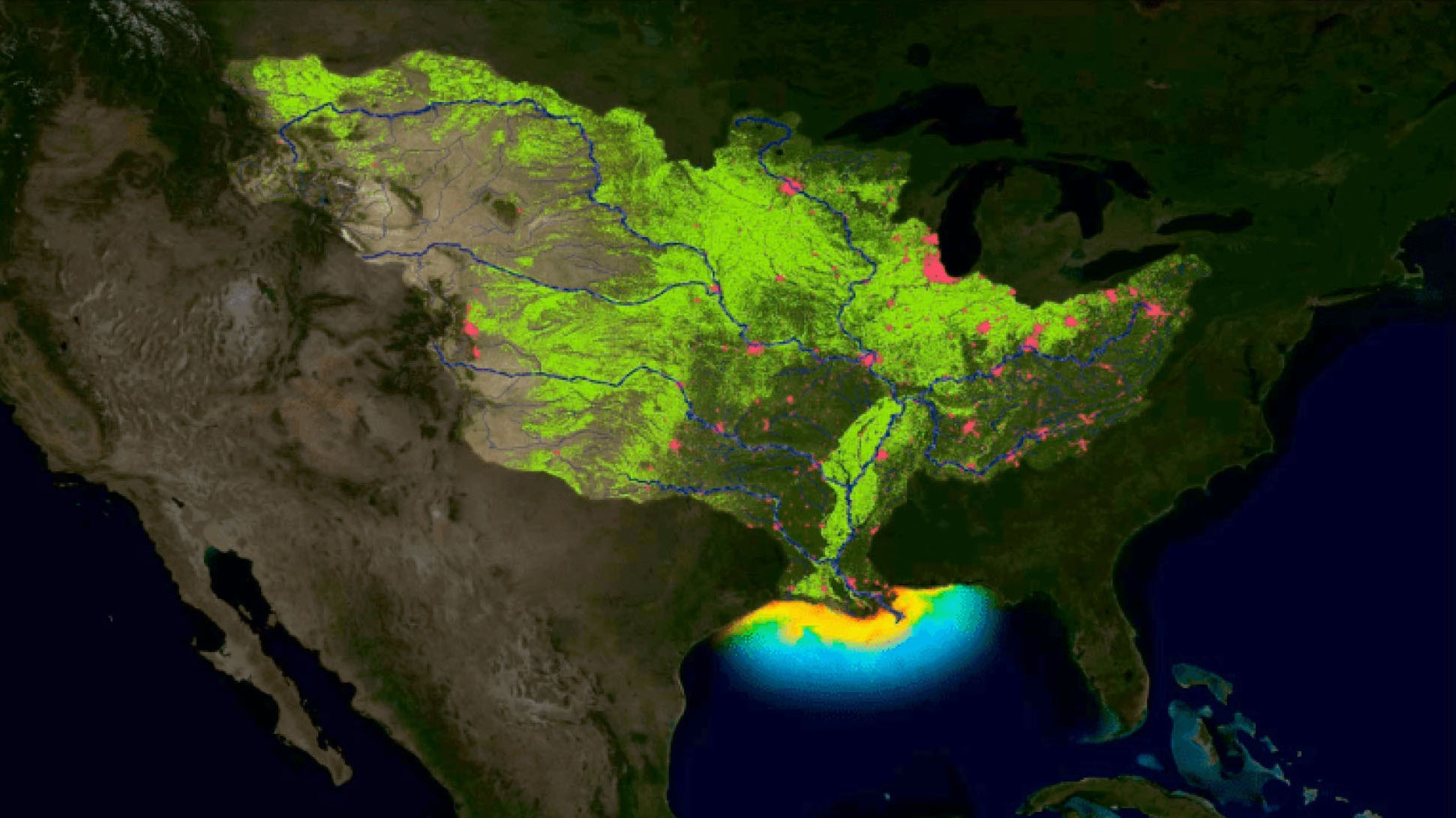 The Mississippi River watershed drains 1.245 million square miles, including all or parts of 31 U.S. states and 2 Canadian provinces. The map illustrates how runoff from farms (green areas) and cities (red areas) drains into the Mississippi, delivering nutrients into the Gulf of Mexico and fueling the annual hypoxic zone. Image credit: NOAA

ANN ARBOR—University of Michigan scientists and their colleagues are forecasting that this summer’s Gulf of Mexico hypoxic zone or ‘dead zone’—an area of low to no oxygen that can kill fish and other marine life—will be approximately 7,829 square miles, or roughly the size of Massachusetts.

The annual forecast was released today by the National Oceanic and Atmospheric Administration, which funds the work. The prediction is based on U.S. Geological Survey river flow and nutrient data.

A major factor contributing to the large dead zone this year is the abnormally high amount of spring rainfall in many parts of the Mississippi River watershed, which led to record high river flows and much larger nutrient loading to the Gulf of Mexico. This past May, discharge in the Mississippi and Atchafalaya rivers was about 67% above the long-term average between 1980 and 2018, according to USGS.

While this year’s zone will be larger than usual because of the flooding, the long-term trend is still not changing. The bottom line is that we will never reach the dead zone reduction target of 1,900 square miles until more serious actions are taken to reduce the loss of Midwest fertilizers into the Mississippi River system.

Don Scavia, professor emeritus at the School for Environment and Sustainability.

“While this year’s zone will be larger than usual because of the flooding, the long-term trend is still not changing. The bottom line is that we will never reach the dead zone reduction target of 1,900 square miles until more serious actions are taken to reduce the loss of Midwest fertilizers into the Mississippi River system,” said U-M aquatic ecologist Don Scavia, professor emeritus at the School for Environment and Sustainability.

Scavia is a member of NOAA-funded teams that produce annual forecasts for the Gulf of Mexico, Chesapeake Bay and Lake Erie.

The annually recurring Gulf of Mexico hypoxic zone is primarily caused by excess nutrient pollution from human activities, such as urbanization and agriculture, occurring throughout the Mississippi River watershed. Once the excess nutrients reach the Gulf, they stimulate an overgrowth of algae, which eventually die, then sink and decompose in the water. 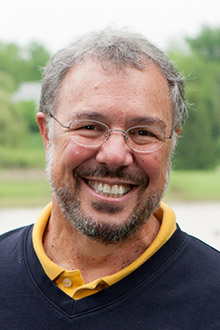 Don Scavia, professor emeritus at the School for Environment and Sustainability.

The resulting low oxygen levels near the bottom are insufficient to support most marine life and have long-term impacts to living marine resources that are unable to leave the area. Considered one of the world’s largest, the Gulf of Mexico dead zone occurs every summer.

NOAA issues a dead zone forecast each year and refines the models used by the Hypoxia Task Force to set nutrient reduction targets and better understand the link between hypoxia and nutrients. The forecast assumes typical coastal weather conditions, but the measured dead zone size could be disrupted and its size could change by major wind events, hurricanes and tropical storms that mix ocean waters, as occurred in 2018.

A NOAA-supported monitoring survey will confirm the size of the 2019 Gulf dead zone in early August, a key test of the accuracy of the models.

“The models help predict how hypoxia in the Gulf of Mexico is linked to nutrient inputs coming from throughout the Mississippi River Basin,” said Steve Thur, director of NOAA’s National Centers for Coastal Ocean Science. “This year’s historic and sustained river flows will test the accuracy of these models in extreme conditions, which are likely to occur more frequently in the future, according to the latest National Climate Assessment.

“The assessment predicts an increase in the frequency of very heavy precipitation events in the Midwest, Great Plains, and Southeast regions, which would impact nutrient input to the northern Gulf of Mexico and the size of the hypoxic zone.”

“Long-term monitoring of the country’s streams and rivers by the USGS has shown that while nitrogen loading into some other coastal estuaries has been decreasing, nitrogen loading into the Gulf of Mexico from the Mississippi River Basin has been relatively stable in recent years,” said Don Cline, associate director for the USGS Water Resources Mission Area. 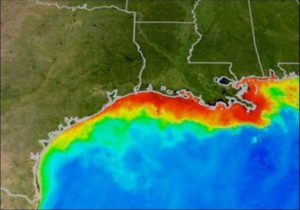 An oxygen-starved hypoxic zone, commonly called a dead zone and shown in red, forms each summer in the Gulf of Mexico. Fish and shellfish either leave the oxygen-depleted waters or die, resulting in losses to commercial and sports fisheries. Image credit: NOAA

“USGS monitoring and real-time sensors, coupled with watershed modeling, will continue to improve our understanding of the causes of these changes and the role they play in the Gulf and other coastal areas.”

USGS operates more than 3,000 real-time stream gauges, 50 real-time nitrate sensors and 35 long-term monitoring sites throughout the Mississippi-Atchafalaya watershed, which drains all rivers and streams in parts or all of 31 states and two Canadian provinces into the Gulf of Mexico.

This is the second year NOAA is producing its own independent forecast product, the
culmination of a multiyear academic-federal partnership to develop a suite of NOAA-supported hypoxia forecast models. The partnership included teams of researchers at U-M, Louisiana State University, William & Mary’s Virginia Institute of Marine Science, North Carolina State University, Dalhousie University and the USGS.

The NOAA forecast integrates the results of these multiple independent models into a separate average forecast and is released in coordination with these external groups, some of which are also developing independent forecasts.

NOAA and its partners continue to develop additional hypoxia forecast capabilities to
understand impacts on living marine resources, better evaluate the role of phosphorus on the dead zone size, and understand the relationship between hypoxia volume and area.