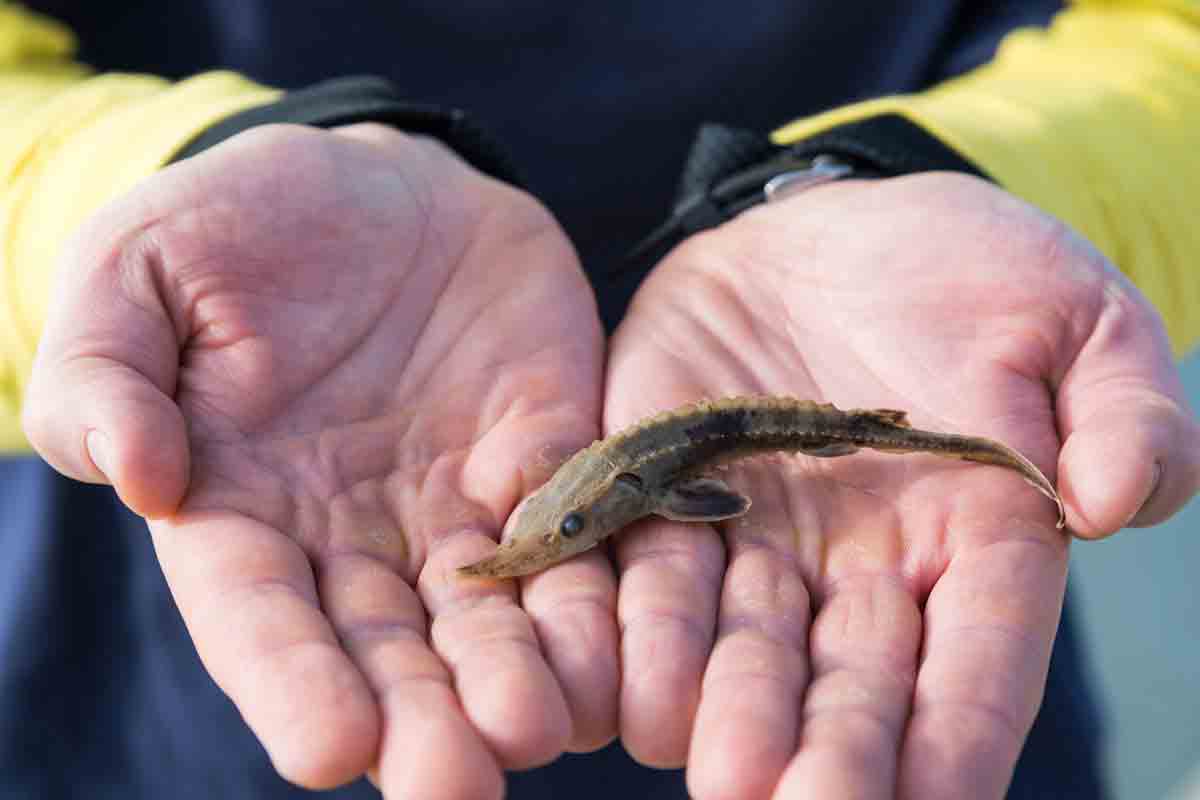 A museum specimen of a baby lake sturgeon. This individual would have been several months old. Lake sturgeon this size are rarely found in the Detroit and St. Clair rivers. Image credit: Austin Thomason, Michigan Photography

ANN ARBOR—Rock spawning reefs have been built at several locations in the Detroit and St. Clair rivers over the past 13 years to attract lake sturgeon and other native fish species. Sturgeon are spawning at these sites, but where do the baby fish go after they hatch and leave the shelter of the rock reefs? A study of the St. Clair River by U-M scientists shows that despite river-current speeds of more than 3 feet per second, some recently hatched lake sturgeon manage to remain in the St. Clair’s North Channel, a surprising finding with implications for the siting of future spawning reefs.

Joseph Krieger, who received his doctorate last month from U-M’s School of Natural Resources and Environment, spent three summers doing fieldwork on the St. Clair and Detroit rivers to collect data for his dissertation. The fieldwork involved placing drift nets

on the bottom of the river channels, at various distances from artificial spawning reefs, and documenting dispersal patterns of larval lake sturgeon emerging from these reefs. Krieger’s doctoral adviser was U-M fishery biologist Jim Diana.

A big part of the project by Krieger and Diana involved creating computer models to evaluate the amount, quality and spatial distribution of nursery habitat used by young lake sturgeon in the St. Clair and Detroit rivers. In the St. Clair’s North Channel, 91 percent of the 283 larval sturgeon netted by Krieger were clustered at three sites a short distance downstream from Maslinka Reef, a known sturgeon-spawning site formed in the early 1900s when steamships dumped coal cinders into the river. Most of the larvae were taken in areas designated as high-quality habitat by the habitat suitability model.

Larval sturgeon were collected at the North Channel locations up to four weeks after the eggs hatched on Maslinka Reef, meaning the baby fish were not swept downstream into Lake St. Clair as soon as they hatched—as experts had long believed. Instead, they remained in the swiftly moving channel, probably by burrowing into the river bottom. The St. Clair study showed that there is “an abundance of suitable nursery habitat” within the North Channel, according to a paper by Krieger and Diana published online in December in the Canadian Journal of Fisheries and Aquatic Sciences.

The researchers’ habitat suitability model indicated a significantly higher abundance of high-quality lake sturgeon habitat in the St. Clair River’s North Channel (29.1 percent) than in the river’s Middle Channel (15.1 percent) or in the Detroit River’s Fighting Island Channel (16.8 percent). However, spatial distribution of high-quality habitat in the St. Clair’s north and middle channels was very similar, suggesting that larval lake sturgeon in both places remain in the channel, rather than being swept out into Lake St. Clair.

In the Detroit River, larval sturgeon are believed to leave the channel and continue drifting downstream to areas of more suitable habitat. A paper about the team’s Detroit River findings will be submitted for publication soon. Former U-M master’s student Ryan Young, now at the U.S. Geological Survey, is part of the research team.

“Development and evaluation of a habitat suitability model for young lake sturgeon in the GLCCs.” Krieger, J.R., Young, R.T., and Diana, J.S. Presentation at 11 a.m. Wed., May 17, Room 252B.