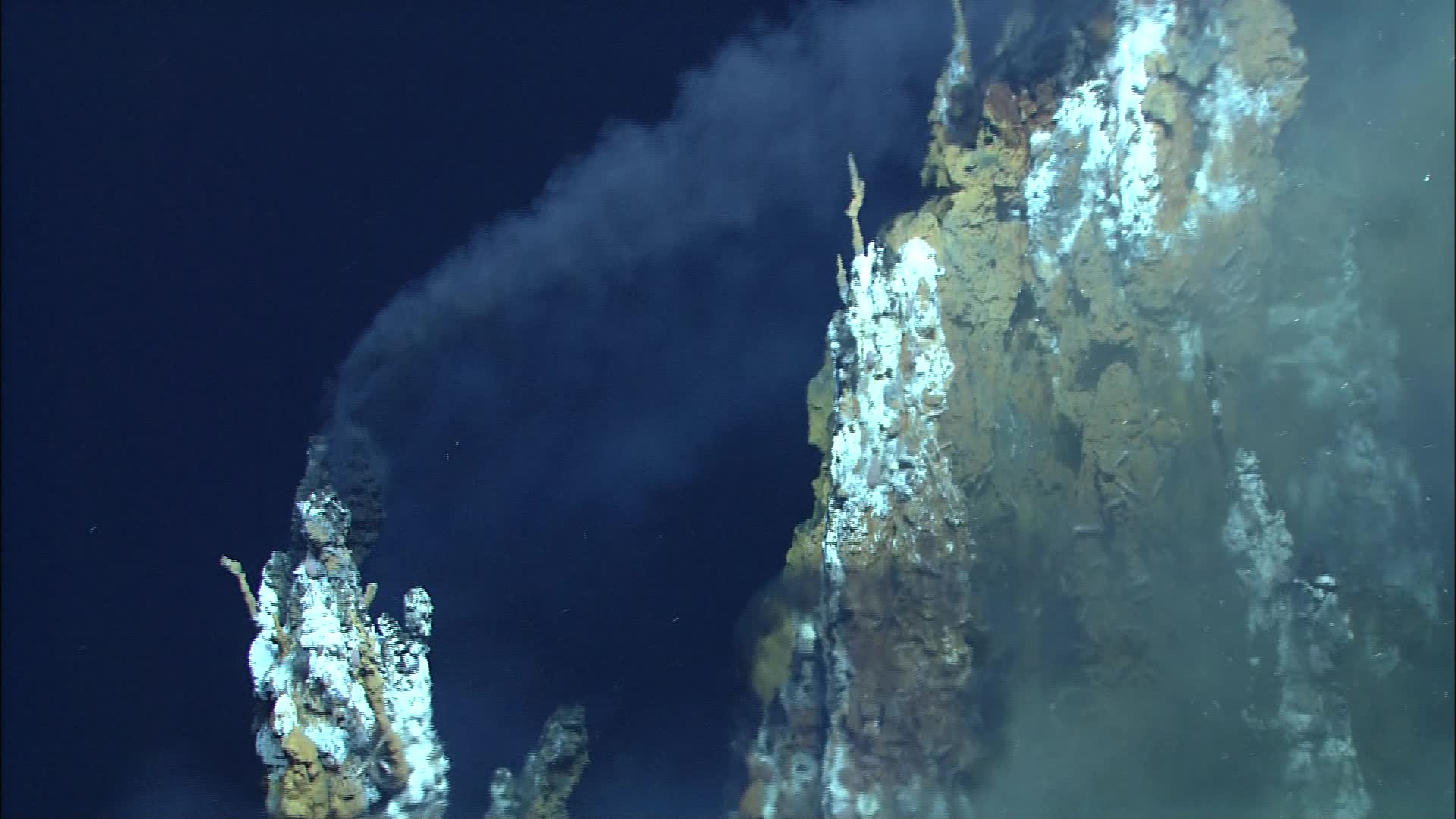 Black smoke from the top of a “chimney” in the Lau Basin in the western Pacific Ocean. Water samples collected by an unmanned submarine revealed how viruses hijack deep-sea bacteria at hydrothermal vents. Image courtesy of MARUM, University of Bremen and NOAA-Pacific Marine Environmental Laboratory.ANN ARBOR—More than a mile beneath the ocean’s surface, as dark clouds of mineral-rich water billow from seafloor hot springs called hydrothermal vents, unseen armies of viruses and bacteria wage war.

Like pirates boarding a treasure-laden ship, the viruses infect bacterial cells to get the loot: tiny globules of elemental sulfur stored inside the bacterial cells.

Instead of absconding with their prize, the viruses force the bacteria to burn the valuable sulfur reserves, then use the unleashed energy to replicate, eventually filling the bacterial cells to the bursting point.

“Our findings suggest that viruses in the dark oceans indirectly access vast energy sources in the form of elemental sulfur,” said University of Michigan marine microbiologist and oceanographer Gregory J. Dick, whose team collected DNA from deep-sea microbes in seawater samples from hydrothermal vent sites in the western Pacific Ocean and the Gulf of California.

The study identifies viruses as key players in the thriving ecosystems – which include exotic 6-foot tube worms, giant clams and mussels, as well as shrimp – huddled around deep-sea hydrothermal vents.

In addition, they hint that the viruses act as agents of evolution in chemosynthetic systems by swapping genes with the bacteria, Dick said. “We suggest that the viruses serve as a reservoir of genetic diversity that helps shape bacterial evolution,” he said.

A paper summarizing the findings is scheduled for online publication May 1 in Science. The first author is Karthik Anantharaman, a doctoral student in Dick’s lab at the Department of Earth and Environmental Sciences. 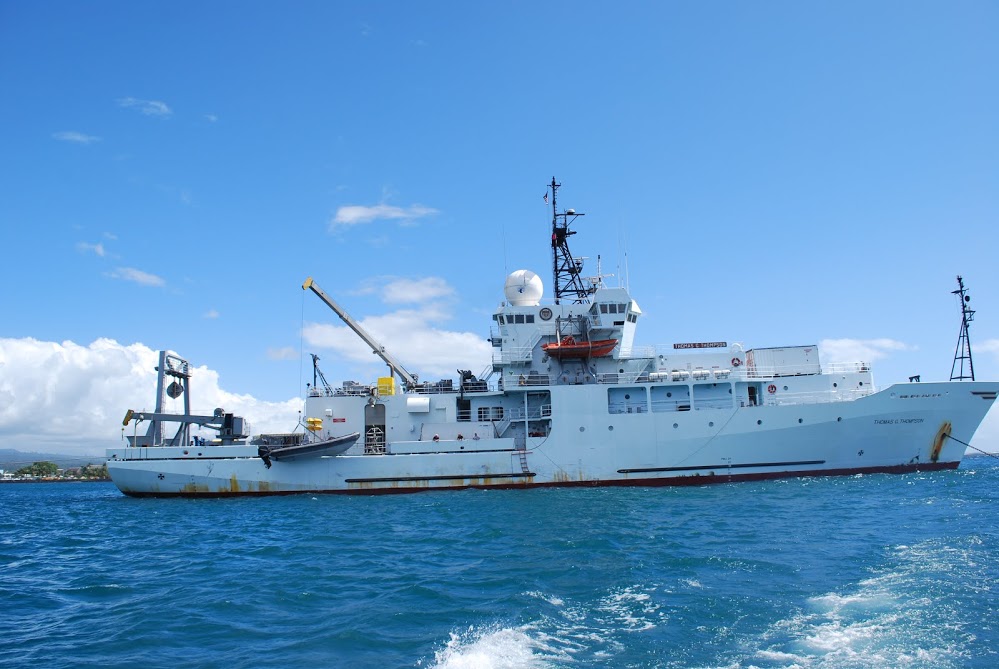 The research vessel Thomas G. Thompson, which visited hydrothermal vent sites in the western Pacific Ocean Photo by Lucia Upchurch.imilar microbial interactions have been observed in shallow ocean waters between photosynthetic bacteria and the viruses that prey on them. But this is the first time such a relationship has been seen in a chemosynthetic system, one in which the microbes rely solely on inorganic compounds, rather than sunshine, as their energy source.

Dick and his colleagues collected water samples during trips to the Eastern Lau Spreading Center in the Western Pacific and the Guaymas Basin in the Gulf of California. An unmanned submarine from the Woods Hole Oceanographic Institution captured the samples, at a depth of more than 6,000 feet, near “black smokers” spewing mineral-rich seawater at temperatures surpassing 500 degrees Fahrenheit.

Back in the laboratory, the researchers reconstructed near-complete viral and bacterial genomes from the DNA snippets retrieved at six hydrothermal vent plumes. In addition to the common sulfur-consuming bacterium SUP05, they found genes from five previously unknown viruses.

The genetic data suggest that the viruses prey on SUP05. That’s not too surprising, since viruses are the most abundant biological entities in the oceans and are a pervasive cause of mortality among marine microorganisms.

The real surprise is that the viral DNA contains genes closely related to SUP05 genes used to extract energy from sulfur compounds.

When combined with results from previous studies, this finding suggests that the viruses force SUP05 bacteria to use viral SUP05-like genes to help process stored globules of elemental sulfur. The SUP05-like viral genes are called auxiliary metabolic genes.

“We hypothesize that the viruses enhance bacterial consumption of this elemental sulfur, to the benefit of the viruses,” said co-author Melissa Duhaime, an assistant research scientist in the U-M Department of Ecology and Evolutionary Biology. The revved-up metabolic reactions may release energy that the viruses then use to replicate and spread. 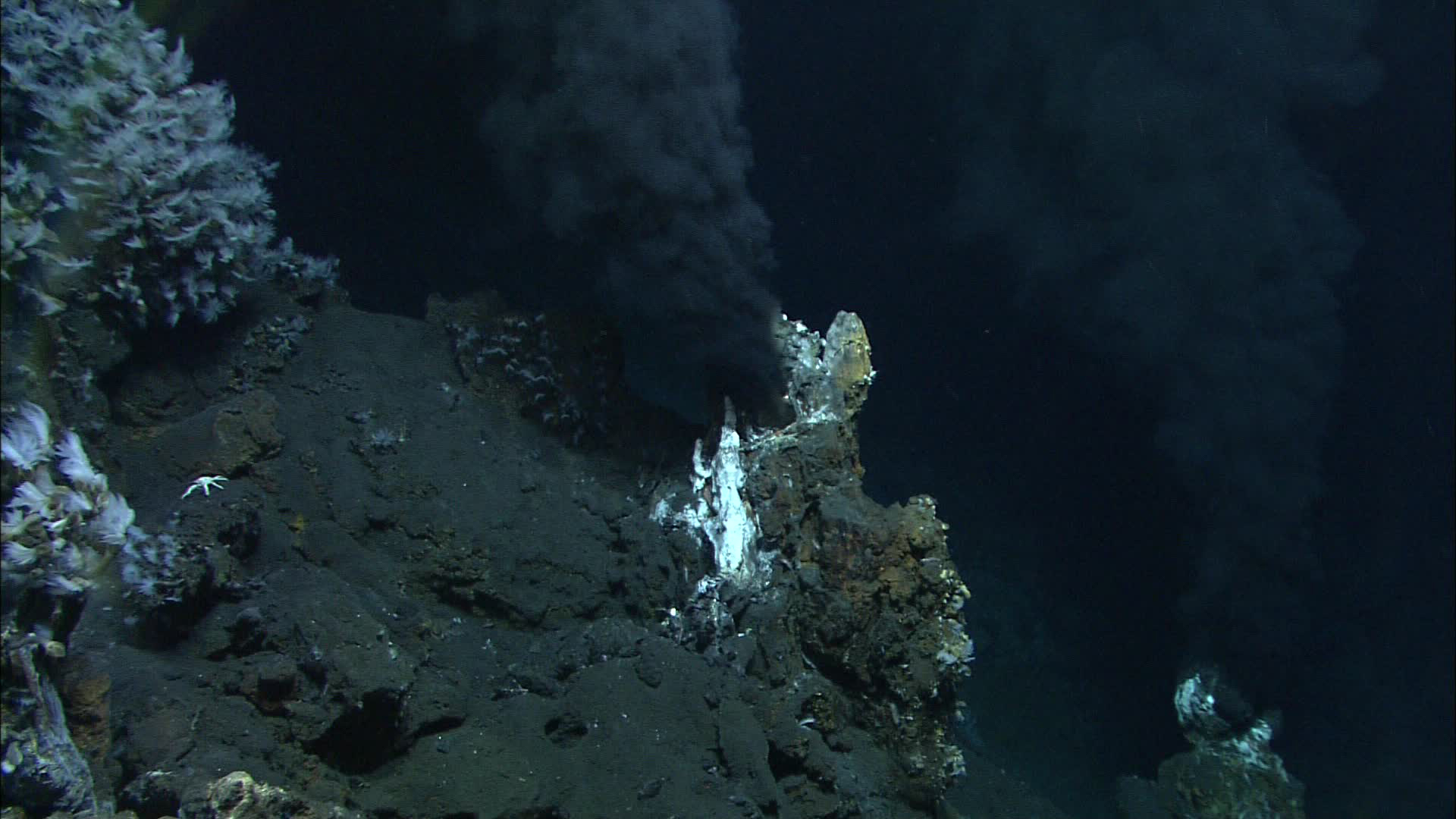 Two “black smokers” vent super-heated, mineral-rich water in the Lau Basin in the western Pacific Ocean. Water samples collected by an unmanned submarine revealed how viruses hijack deep-sea bacteria at hydrothermal vents. Image courtesy of MARUM, University of Bremen and NOAA-Pacific Marine Environmental Laboratory.“We suspect that these viruses are essentially hijacking bacterial cells and getting them to consume elemental sulfur so the viruses can propagate themselves,” Anantharaman said.

But how did SUP05-like genes end up in these viruses? The researchers can’t say for sure, but presumably the viruses snatched genes from SUP05 during some ancient microbial interaction.

“There seems to have been an exchange of genes, which implicates the viruses as an agent of evolution. That’s interesting from an evolutionary biology standpoint,” Dick said.

The new microbial findings will help researchers understand how marine biogeochemical cycles, including the sulfur cycle, will respond to global environmental changes such as the ongoing expansion of dead zones. SUP05 bacteria, which may generate the greenhouse gas nitrous oxide, will likely expand their range as oxygen-starved zones continue to grow in the oceans.

“Viruses play a cardinal role in biogeochemical processes in the ocean’s shallow and mid-to-deeper waters,” said David Garrison, program director in the National Science Foundation’s Division of Ocean Sciences, which funded the research. “This study suggests that viruses may have a similar importance in deep-sea thermal vent environments.”