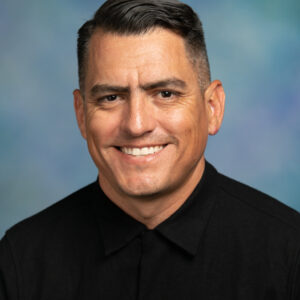 His appointment, approved May 19 by the Board of Regents, is effective July 1 and runs through June 30, 2027.

As a visual artist and writer, Jackson’s work reflects the themes and imagery of the Latina/Latino presence in American art, contemporary Latina/Latino printmaking, and the rise and impact of Chicana/Chicano graphics.

In her recommendation to the Board of Regents, U-M Provost Laurie McCauley pointed to Jackson’s success as the co-founding director of Taller Arte del Nuevo Amanecer, a community-based art center, for providing him experience securing external funding and negotiating with multiple municipalities and constituencies to present curricular and artistic programming.

The collaborative partnership that began in 2004 between the UC Davis Department of Chicana/o Studies and the Woodland, California, community also “enabled community members alienated from cultural and institutional representation to emerge as cultural agents,” McCauley wrote.

Jackson, who also was named a tenured professor of art and design, follows Gunalan Nadarajan, who will step down at the end of June after serving for a decade as dean.

“Professor Jackson is an accomplished artist, an engaging teacher and an experienced academic administrator,” McCauley said. “He has a keen appreciation for the role of art and design in society, is an effective advocate for the importance of the arts in public universities and will help the university to more fully integrate the arts into our mission of serving the people of Michigan and the world.”

Jackson’s work has been exhibited in national traveling exhibitions such as “Estampas de la Raza: Contemporary Mexican American Prints from the Romo Collection,” which began at the McNay Art Museum in San Antonio, and “Printing the Revolution: The Rise and Impact of Chicano Graphics, 1965-Now,” which just opened at the Smithsonian American Art Museum.

Jackson described his chance to join the Stamps community as a “profound privilege.”

“The Penny W. Stamps School of Art & Design is a nationally unique artistic and design-oriented space with an immense foundation of human and institutional wealth,” Jackson said. “Stamps’ curriculum provides national leadership for undoing the disciplinary boundaries that limit expansive artistic and design-oriented practices. I am grateful to Dean Nadarajan for his sustained generational leadership of Stamps, which has situated the community for continued impact and success.”

Jackson said he will “cherish the opportunity” to support the aspirations of the faculty, staff, students and alumni within the Stamps community.

“It is my perspective that art and design praxis are critical to building more just, equitable and healthy communities and I look forward to working with the makers in Stamps to amplify their impact across the range of world-building activities manifested within Stamps,” he said.

While chair of the Department of Chicana/o Studies at UC Davis, the unit grew from six to 12 full-time equivalent faculty and from 75 to 310 annual majors. During his tenure, he was asked to assume leadership of the Cultural Studies Ph.D. program, a graduate group that manages 45 Ph.D. students and more than 90 affiliated faculty.

As the current associate dean for academic programs and planning, Jackson manages all facets of the undergraduate program in the UC Davis College of Letters and Science, which includes 14,000 students and 900 instructional faculty. He also provides leadership in assessing resource and employee allocations for the college.