ANN ARBOR—Mexican journalist Emilio Gutiérrez Soto, who has been held at an immigrant detention center since last December, will join the 2018-19 Knight-Wallace Fellowships for Journalists class at the University of Michigan.

Gutiérrez, who will be a Senior Press Freedom Fellow at Wallace House, and his son, Oscar, were freed July 26 from a U.S. Immigration and Customs Enforcement detention facility in Texas. Their release came a day before a federal judge’s deadline for U.S. Department of Homeland Security officials to produce documents to explain why it detained the journalist. 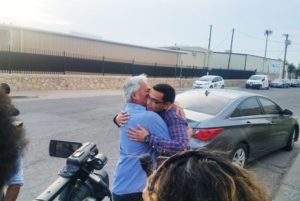 “With so many challenges to press freedom, and in the midst of a crisis around immigration policy, it is easy to feel powerless,” said Knight-Wallace Fellowship director Lynette Clemetson, who met with Gutiérrez in April at the El Paso, Texas, detention facility to invite him to join the Knight-Wallace program. “Emilio’s release, due to the efforts of many, is a reminder that we all can do something to affect change.”

Gutiérrez is seeking asylum in the United States following death threats related to his reporting. Mexico is considered the most dangerous country in the world for journalists, after war-torn Syria. Wallace House joined numerous journalism organizations including The National Press Club, Reporters Without Borders and the American Society of News Editors, to collaborate in support of Gutiérrez’s case.

“Wallace House, the University of Michigan and the Ann Arbor community are eager to receive Gutiérrez and his son as the family works to resume their life in the U.S. and Gutiérrez has the opportunity to reconnect with journalism,” Clemetson said.

While at U-M, Gutiérrez will study issues related to global press freedom and safety.