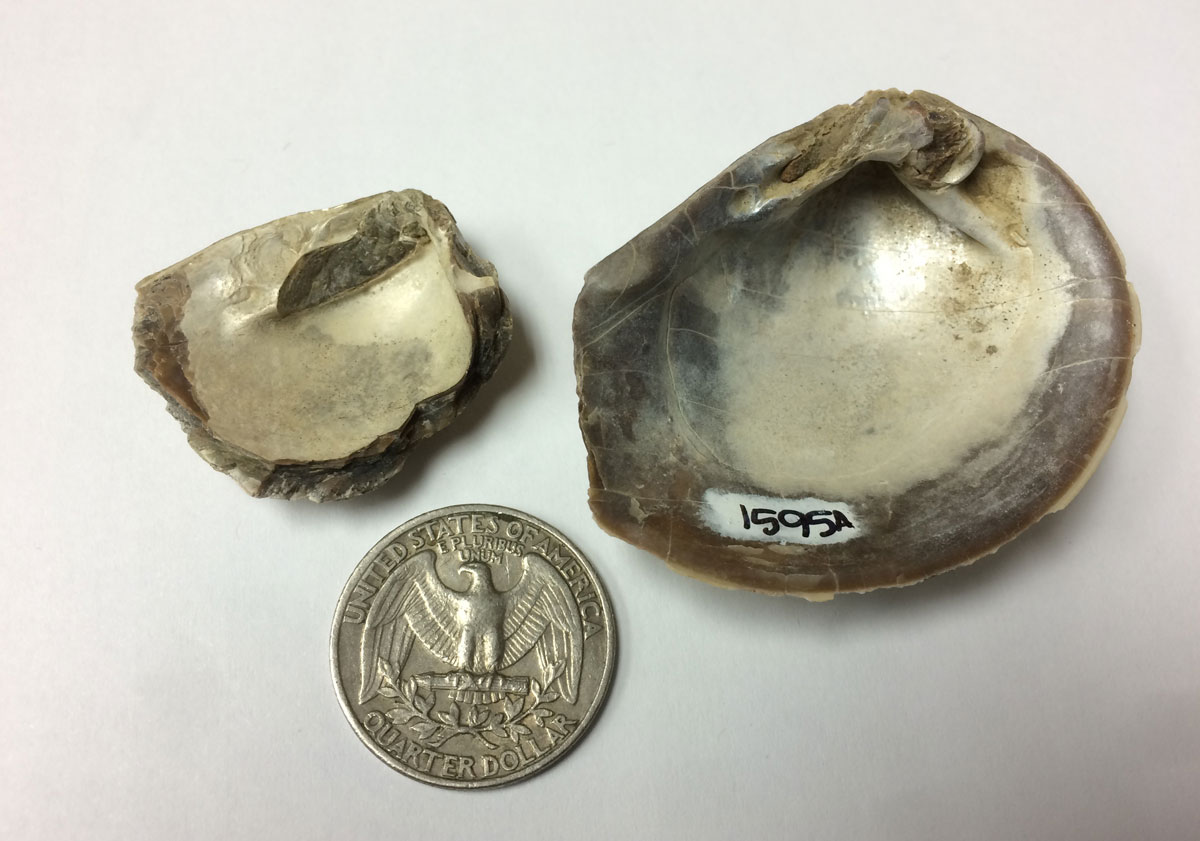 The preservation of Cretaceous mollusk fossils from Seymour Island is excellent, with shells preserving original mother-of-pearl material as in these two specimens of Eselaevitrigonia regina. Image credit: Sierra V. PetersenANN ARBOR—A new reconstruction of Antarctic ocean temperatures around the time the dinosaurs disappeared 66 million years ago supports the idea that one of the planet’s biggest mass extinctions was due to the combined effects of volcanic eruptions and an asteroid impact.

Two University of Michigan researchers and a Florida colleague found two abrupt warming spikes in ocean temperatures that coincide with two previously documented extinction pulses near the end of the Cretaceous Period. The first extinction pulse has been tied to massive volcanic eruptions in India, the second to the impact of an asteroid or comet on Mexico’s Yucatan Peninsula.

Both events were accompanied by warming episodes the U-M-led team found by analyzing the chemical composition of fossil shells using a recently developed technique called the carbonate clumped isotope paleothermometer.

The new technique, which avoids some of the pitfalls of previous methods, showed that Antarctic ocean temperatures jumped about 14 degrees Fahrenheit during the first of the two warming events, likely the result of massive amounts of heat-trapping carbon dioxide gas released from India’s Deccan Traps volcanic region. The second warming spike was smaller and occurred about 150,000 years later, around the time of the Chicxulub impact in the Yucatan.

“This new temperature record provides a direct link between the volcanism and impact events and the extinction pulses—that link being climate change,” said Sierra Petersen, a postdoctoral researcher in the U-M Department of Earth and Environmental Sciences.

“We find that the end-Cretaceous mass extinction was caused by a combination of the volcanism and meteorite impact, delivering a theoretical ‘one-two punch,'” said Petersen, first author of a paper published online July 5 in the journal Nature Communications. 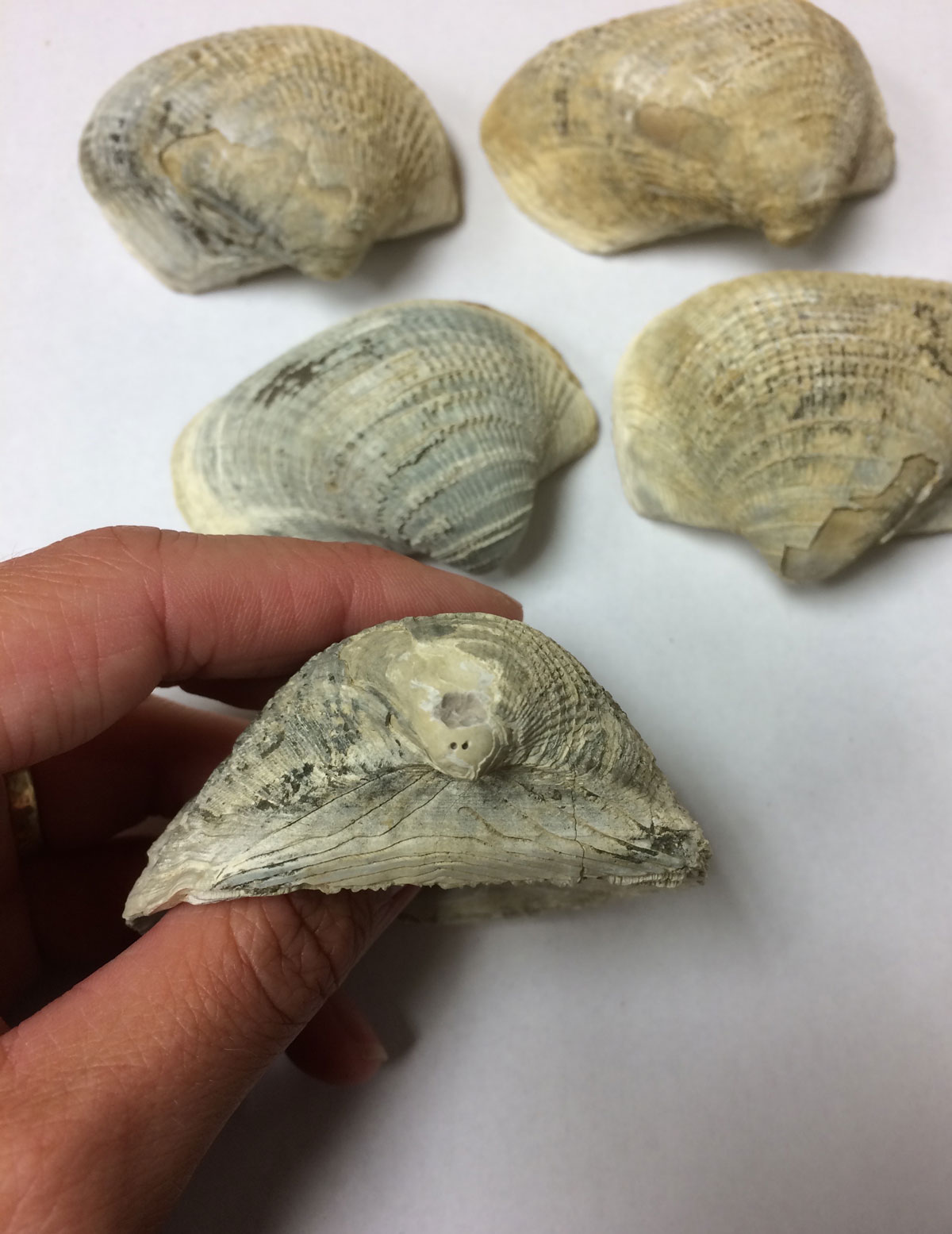 Two small drill holes below a larger drilled area show where sample material was extracted from the umbo (hinge) region of this Cucullaea antarctica shell, with four other shells of the same species in the background. Image credit: Sierra V. PetersenThe cause of the Cretaceous-Paleogene (KPg) mass extinction, which wiped out the non-avian dinosaurs and roughly three-quarters of the planet’s plant and animal species about 66 million years ago, has been debated for decades. Many scientists believe the extinction was caused by an asteroid impact; some think regional volcanism was to blame, and others suspect it was due to a combination of the two.

Recently, there’s been growing support for the so-called press-pulse mechanism. The “press” of gradual climatic change due to Deccan Traps volcanism was followed by the instantaneous, catastrophic “pulse” of the impact. Together, these events were responsible for the KPg extinction, according to the theory.

The new record of ancient Antarctic ocean temperatures provides strong support for the press-pulse extinction mechanism, Petersen said. Pre-impact climate warming due to volcanism “may have increased ecosystem stress, making the ecosystem more vulnerable to collapse when the meteorite hit,” concluded Petersen and co-authors Kyger Lohmann of U-M and Andrea Dutton of the University of Florida.

To create their new temperature record, which spans 3.5 million years at the end of the Cretaceous and the start of the Paleogene Period, the researchers analyzed the isotopic composition of 29 remarkably well-preserved shells of clam-like bivalves collected on Antarctica’s Seymour Island.

These mollusks lived 65.5-to-69 million years ago in a shallow coastal delta near the northern tip of the Antarctic Peninsula. At the time, the continent was likely covered by coniferous forest, unlike the giant ice sheet that is there today.

As the 2-to-5-inch-long bivalves grew, their shells incorporated atoms of the elements oxygen and carbon of slightly different masses, or isotopes, in ratios that reveal the temperature of the surrounding seawater.

The isotopic analysis showed that seawater temperatures in the Antarctic in the Late Cretaceous averaged about 46 degrees Fahrenheit, punctuated by two abrupt warming spikes.

“A previous study found that the end-Cretaceous extinction at this location occurred in two closely timed pulses,” Petersen said. “These two extinction pulses coincide with the two warming spikes we identified in our new temperature record, which each line up with one of the two ‘causal events.'”

Unlike previous methods, the clumped isotope paleothermometer technique does not rely on assumptions about the isotopic composition of seawater. Those assumptions thwarted previous attempts to link temperature change and ancient extinctions on Seymour Island.

Petersen is an NSF Postdoctoral Research Fellow. The work was supported by several National Science Foundation grants. The Nature Communications paper is titled “End-Cretaceous extinction in Antarctica linked to both Deccan volcanism and meteorite impact via climate change.”