ANN ARBOR—An ancient mammoth unearthed in a farmer’s field southwest of Ann Arbor this week may provide clues about the lives of early humans in the region.

A team of University of Michigan paleontologists and an excavator who donated his time worked all day at the site in Lima Township, roughly 10 miles southwest of Ann Arbor and several miles from the town of Chelsea. They were able to recover about 20 percent of the animal’s bones, including the skull and two tusks, numerous vertebrae and ribs, the pelvis and both shoulder blades. 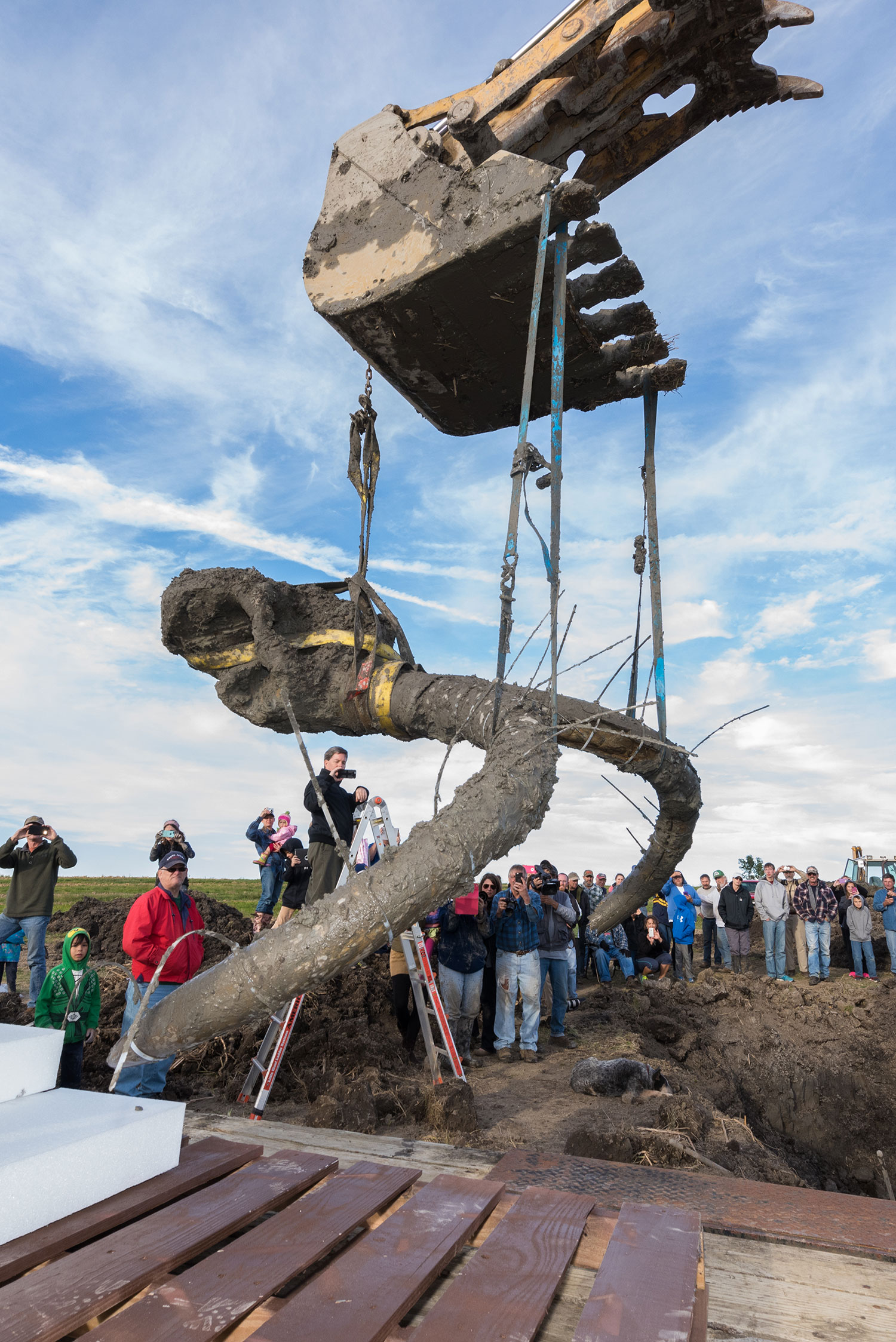 Paleontology Ph.D. candidate John Fronimos watches as the mammoth skull and tusks are hoisted from the excavation pit. Image credit: Daryl Marshke, Michigan PhotographyThe bones are from an adult male mammoth that likely lived 11,700 to 15,000 years ago, though the remains have not yet been dated, said U-M paleontologist Daniel Fisher, who led the dig. The site holds “excellent evidence of human activity” associated with the mammoth remains, he said.

“We think that humans were here and may have butchered and stashed the meat so that they could come back later for it,” said Fisher, director of the U-M Museum of Paleontology and a professor in the Department of Earth and Environmental Sciences and the Department of Ecology and Evolutionary Biology.

Mammoths and mastodons—another elephant-like prehistoric creature—once roamed North America before disappearing about 11,700 years ago. Over the years, the remains of about 300 mastodons and 30 mammoths have been recovered in Michigan, Fisher said.

“We get one or two calls like this a year, but most of them are mastodons,” he said.

Most of the mammoth finds in Michigan are not as complete as the remains uncovered by the U-M team, Fisher said.

The team’s working hypothesis is that ancient humans placed the mammoth remains in a pond for storage. Caching mammoth meat in ponds for later use is a strategy that Fisher said he has encountered at other sites in the region.

Evidence supporting that idea includes three basketball-sized boulders recovered next to the mammoth remains. The boulders may have been used to anchor the carcass in a pond. 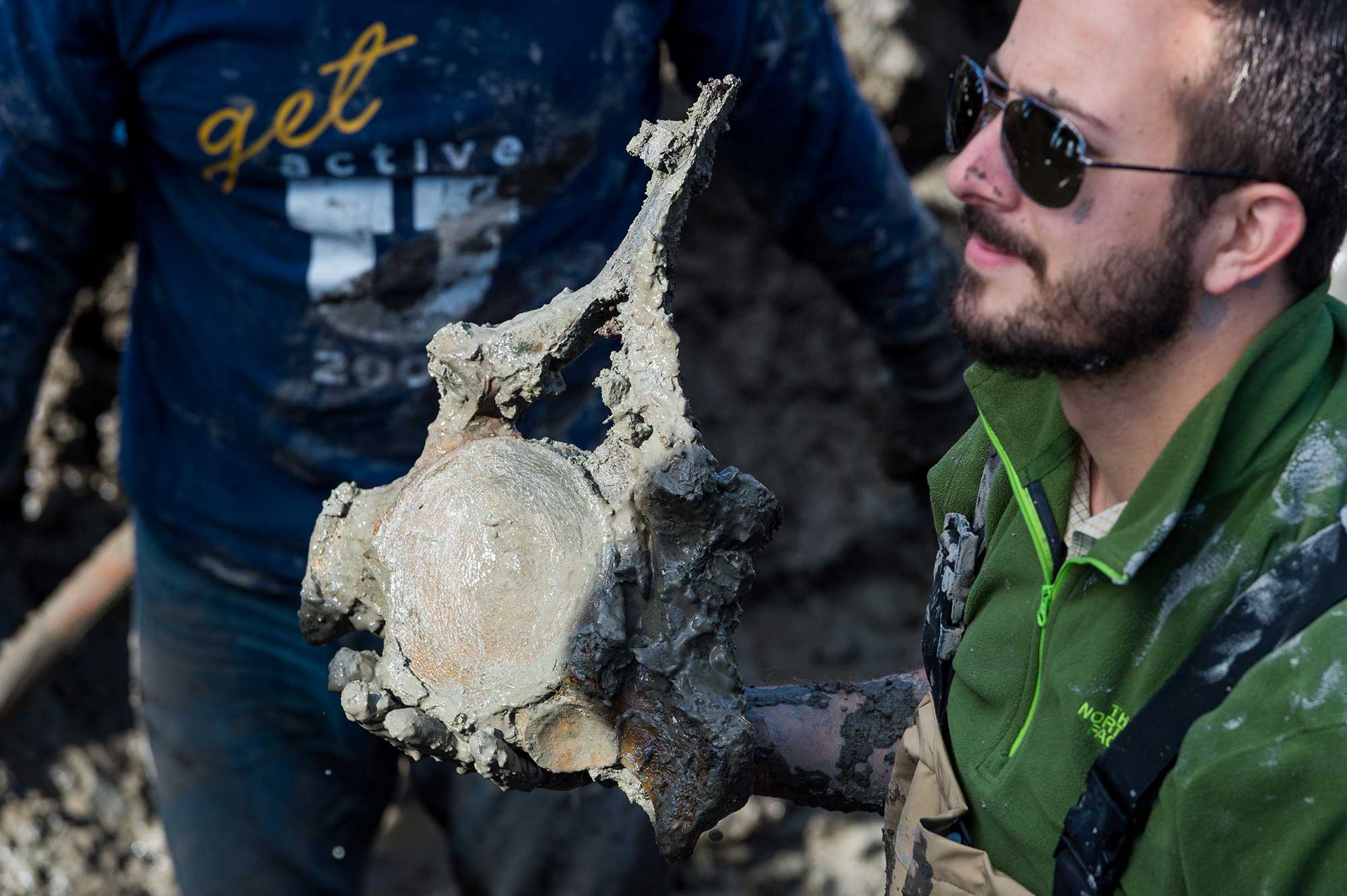 U-M Ph.D. candidate Joe El-Adli holding one of the mammoth vertebrae recovered during Thursday’s dig. Image credit: Daryl Marshke, Michigan Photography.The researchers also recovered a small stone flake that may have been used as a cutting tool next to one of the tusks. And the neck vertebrae were not scattered randomly, as is normally the case following a natural death, but were arrayed in their correct anatomical sequence, as if someone had “chopped a big chunk out of the body and placed it in the pond for storage,” Fisher said.

The first step toward confirming this hypothesis would be to wash the bones and look for cut marks that indicate butchering.

The date that humans arrived in the Americas is unclear and is the topic of heated debate among archaeologists. Depending on the age of the Lima Township mammoth and confirmation of the suspected links to human hunters or scavengers, this week’s find could help push back the date for human habitation in what is now Southeast Michigan.

The first bones were uncovered earlier this week when farmer and property owner James Bristle was installing drainage pipe at a low spot in a wheat field surrounded by soybeans. A backhoe digging a trench uncovered a roughly 3-foot-long bone that was later identified as part of a mammoth pelvis. 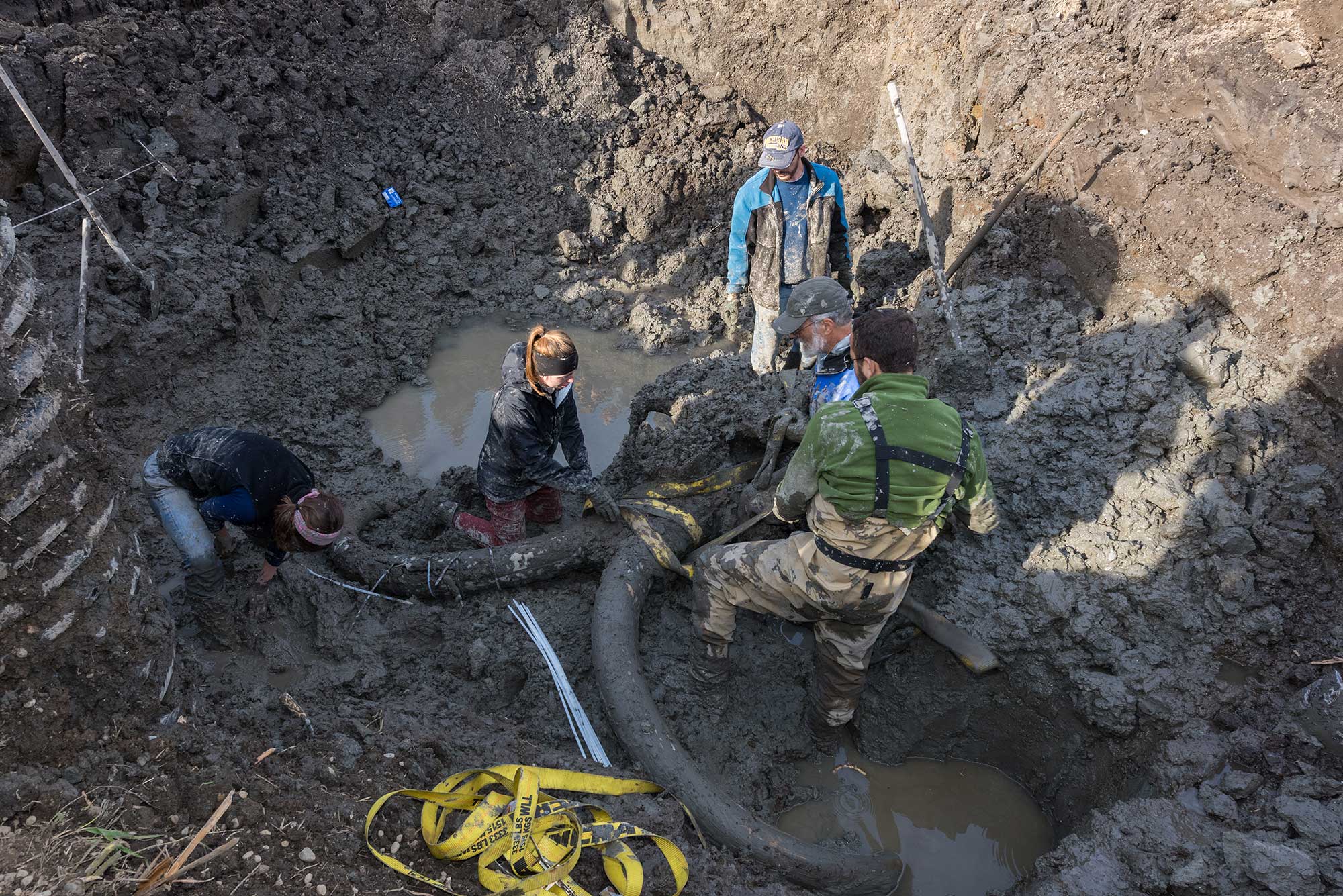 Daniel Fisher, director of the U-M Museum of Paleontology and leader of the dig near Chelsea. Fisher is a professor in the Department of Earth and Environmental Sciences and in the Department of Ecology and Evolutionary Biology. Image credit: Daryl Marshke, Michigan Photography“We didn’t know what it was, but we knew it was certainly a lot bigger than a cow bone,” said Bristle, as he watched the mammoth skull and tusks being uncovered in a roughly 10-foot-deep excavation pit carved from gray-brown clay.

Bristle contacted the U-M Museum of Paleontology and Fisher, who has excavated roughly 30 mammoths and mastodons in North America over the past 36 years.

Bristle said the discovery is both exciting and disruptive. But he said he’s confident that he made the right decision.

“When my 5-year-old grandson came over and saw the pelvis, he just stood there with his jaw wide open and stared. He was in awe,” Bristle said. “So I think this was the right thing to do.”

Bristle gave the U-M team one day to recover the remains. They worked from early morning to nearly sunset, with the help of Jamie Bollinger of Bollinger Sanitation and Excavating in Chelsea, who donated his time. After the bones were recovered, the pit was refilled.