Water in cells behaves in complex and intricate ways 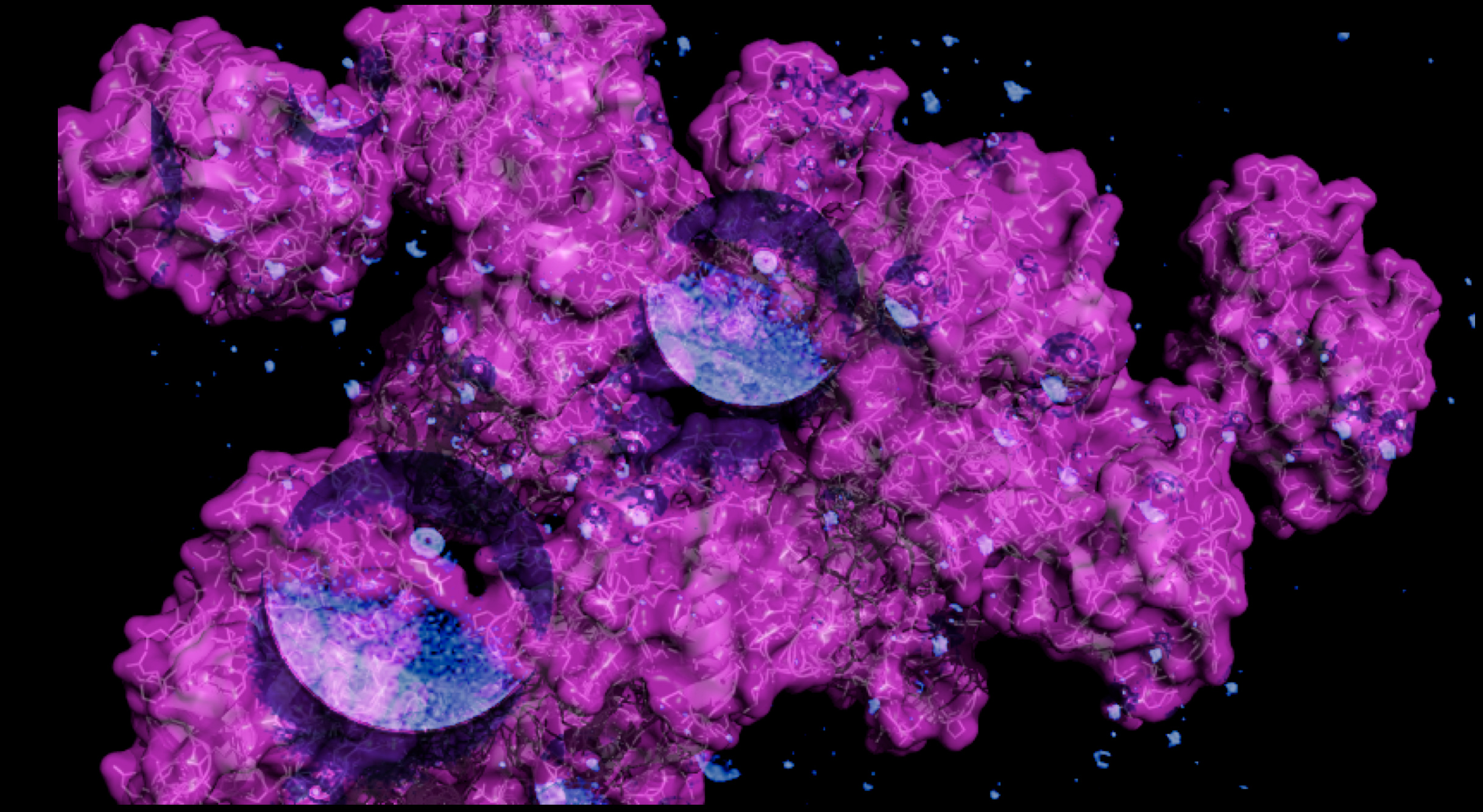 An illustration of crowded lyzozyme proteins (magenta) and droplets of water (blue.) University of Michigan chemistry professors have discovered that when proteins in a cell reach a certain concentration — and distance from each other — the surrounding water dramatically slows down. The findings could provide insights into why proteins clump together in diseases such as Alzheimer’s. Image credit: Kevin KubarychANN ARBOR—In a sort of biological “spooky action at a distance,” water in a cell slows down in the tightest confines between proteins and develops the ability to affect other proteins much farther away, University of Michigan researchers have discovered.

On a fundamental level, the findings show some of the complex and unexpected ways that water behaves inside cells. In a practical sense, they could provide insights into how and why proteins clump together in diseases such as Alzheimer’s and Parkinson’s. Understanding how proteins aggregate could help researchers figure out how to prevent them from doing so.

Spooky action at a distance is how Albert Einstein described quantum entanglement, a phenomenon that can join two or more particles in a way that allows physicists to control all of the entangled particles through one of them, even if the particles are far apart.

“In our case, the motion of water molecules in the tight spaces between cellular machinery acts as the medium for what you might think of as biological action at a distance, ” said Kevin Kubarych, associate professor of chemistry in the U-M College of Literature, Science, and the Arts.

Kubarych and his colleagues found that when they concentrated proteins in a solution until the distance between them was just 30-40 angstroms, the water in that space dramatically slowed by a factor of 10, compared with pure water alone. The researchers were surprised to observe that increasing the crowding beyond that point did not slow the water any further. An angstrom is one-tenth of a nanometer, or one hundred-thousandth of a millimeter.

“Biochemists usually study how these proteins function by observing them at low concentrations—in uncrowded conditions. That’s like saying you want to know how a taxi driver drives and you take the taxi and study it Dexter, Mich. But does that taxi driver function the same in Dexter as he does in Manhattan? No, of course not. What we found was rather than being a gradual transition, you’re either in Dexter or Manhattan. There’s nowhere in between,” Kubarych said.

It is becoming increasingly clear that the water is not simply an innocent bystander, but instead plays an active and sometimes decisive role in mediating the processes carried out by the cell’s machinery. Kevin Kubarych

The research team conducted computer simulations in parallel with experiments. In their experiments, they applied ultrafast spectroscopic techniques and site-specific vibrational labeling to observe the motion of water near protein surfaces on a picosecond timescale. One picosecond is one millionth of a millionth of a second. At the distance they describe, when their solution contained 30 percent proteins and 70 percent water, the motional tumbling of the water slowed from a 3 picosecond pace to 12 picoseconds. Motional tumbling refers to the time it takes for a water molecule to switch the water molecule partners it’s bound to in the elaborate square dance that happens as the liquid moves.

They observed this effect not just in the space where the proteins were tightly packed, but also at much greater separations, estimated to be up to 4 nanometers away. This distance corresponds to roughly 14 water layers and is comparable to the size of an entire protein molecule.

Slower water means slower encounters between proteins and other molecules. Proteins are hydrophobic, meaning they essentially repel water at their surfaces and seek out other molecules to bind with, shielding them both from water. In many cases, they bind with other proteins, but they could also bind with pharmaceutical drugs. Understanding how slower water can affect binding sites could be valuable information for medicine as well.

Biological cells are about 60 percent water and 40 percent macromolecules such as proteins, carbohydrates and other components. This intricate machinery carries out self-organized yet precisely choreographed routines to transform energy, manufacture goods and respond to outside influences.

“While it is tempting to focus on the macromolecules, it is becoming increasingly clear that the water is not simply an innocent bystander, but instead plays an active and sometimes decisive role in mediating the processes carried out by the cell’s machinery,” Kubarych said.

The research team also collaborated with Charles Brooks III, the Warner-Lambert/Parke-Davis Professor of Chemistry. Their paper, “Crowding Induced Collective Hydration of Biological Macromolecules over Extended Distances,” is newly published online in the Journal of the American Chemistry Society. This work was supported by the National Science Foundation and the National Institutes of Health (RR012255) as well as the Camille & Henry Dreyfus Foundation.