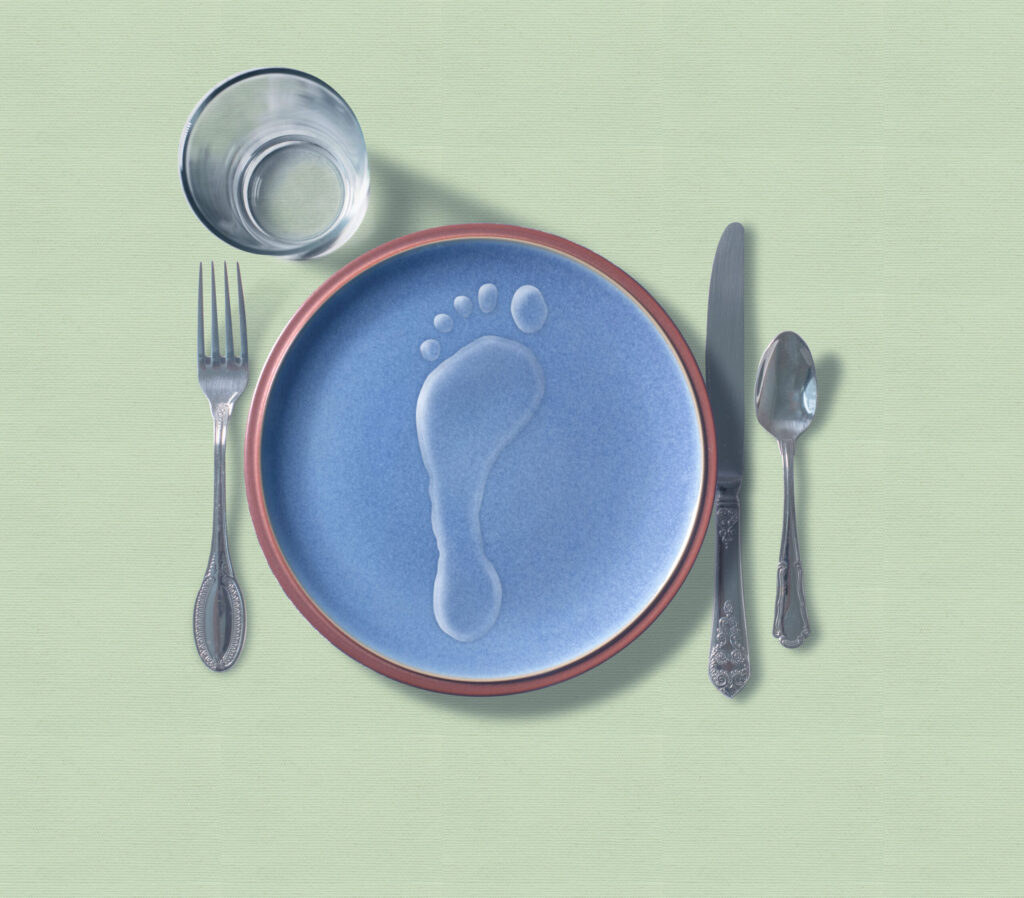 In the journal Nature Food, researchers from the University of Michigan and Tulane University present a “water scarcity footprint” that measures the water-use impacts of U.S. diets, taking into account regional variations in water scarcity. Image credit: Dave Brenner, U-M School for Environment and Sustainability

A lot of attention has been paid in recent years to the carbon footprint of the foods we eat, with much of the focus on the outsize contribution of meat production and especially beef.

But much less is known about the implications of individual U.S. dietary choices on other environmental concerns, such as water scarcity.

In a study published online April 15 in the journal Nature Food, researchers from the University of Michigan and Tulane University present a water scarcity footprint that measures the water-use impacts of U.S. diets, taking into account regional variations in water scarcity.

Meat consumption is the top contributor to the water scarcity footprint of the average U.S. diet, accounting for 31% of the impacts, according to the study. And within the meat category, beef’s contribution is about six times higher than chicken’s.

But other foods that require lots of water or that are mainly grown in U.S. regions where water is scarce—including certain fruits, nuts and vegetables—also have high water-scarcity footprints, the researchers say.

“Beef is the largest dietary contributor to the water scarcity footprint, as it is for the carbon footprint,” said study lead author Martin Heller of the Center for Sustainable Systems at U-M’s School for Environment and Sustainability.

“But the dominance of animal-based food is diminished somewhat in the water scarcity footprint, in part because the production of feed grains for animals is distributed throughout less water-scarce regions, whereas the production of vegetables, fruits and nuts is concentrated in water-scarce regions of the United States, namely the West Coast states and the arid Southwest.”

The novel U-M/Tulane approach combines the types and quantities of foods in the diets of individuals, the irrigation water required to produce those foods, and the relative scarcity of water where the irrigation occurs.

The study also includes examples of dietary substitutions that consumers can make to reduce their personal water scarcity footprint. For example, they can:

A handful of previous studies have looked at how variation in dietary choices influences water scarcity, but most of those studies relied on national-level dietary data. The new U-M/Tulane study, in contrast, links the water scarcity impacts of food production to the individual dietary choices of more than 16,000 Americans.

Also, most previous studies do not recognize the impacts of regional differences in water scarcity, even though irrigation in the U.S. is highly regionalized, with 81% of the water use occurring in 17 Western states.

The new analysis looked at the irrigation water demands of 160 crops, taking into account water scarcity conditions at the watershed level. Scarcity-weighted water consumption data were used to establish a water scarcity footprint for each crop.

The individual crop footprints were then aggregated to the national level and linked to dietary-choice data from the federal National Health and Nutrition Examination Survey, which looked at the dietary choices of 16,800 Americans.

“Our approach is novel in that it links individual dietary choices with the water scarcity-weighted impact of irrigation for specific crops at the watershed level, thus offering insight into the distribution of impacts across a population,” said study co-author Greg Keoleian, director of the Center for Sustainable Systems at U-M’s School for Environment and Sustainability.

To further investigate how dietary choices impact water scarcity, the researchers ranked all of the individual diets by their water scarcity footprint—from lowest impact to highest impact—then divided those diets into five equal groups, or quintiles.

The diets of individuals in the highest-impact quintile accounted for 39% of the overall footprint—a contribution 4.7 times greater than diets in the lowest quintile. Individuals in the top quintile consume large quantities of beef and higher-than-average amounts of tree nuts (almond, walnut, cashew) and high water-intensity fruits and vegetables such as lemon juice, avocado, asparagus, broccoli and cauliflower, according to the study.

“The water-use impacts of food production should be a key consideration of sustainable diets. But until now, little has been known about the water scarcity demands of diets—especially the diets of individuals,” said study co-author and overall project principal investigator Diego Rose of Tulane University.

“There is a lot of variation in the way people eat, so having a picture with this sort of granularity—at the individual level—enables a more nuanced understanding of potential policies and educational campaigns to promote sustainable diets.”

U-M’s Heller said it’s time to start thinking about the resource budgets—measured in carbon, water and land—of our foods and the costs associated with producing them.

“For water, part of that cost depends on the scarcity of the water where a food is grown,” Heller said. “Budgeting the water scarcity footprint of our diet doesn’t mean we need to eliminate the ‘costly’ foods completely, but it probably means we need to consume them sparingly.”

Authors of the Nature Food study, in addition to Heller, Keoleian and Rose, are Amelia Willits-Smith of Tulane University and Tara Mahon of the Center for Sustainable Systems at U-M’s School for Environment and Sustainability. The work was funded by a grant from the Wellcome Trust.