Welcome or not, the season of hospitality is coming

ANN ARBOR—As the holidays approach, a University of Michigan anthropologist explains why entertaining others and being entertained can both be so nerve-wracking. 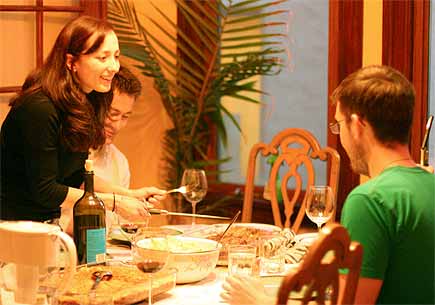 “Hospitality is a kind of politics,” said Andrew Shryock, who has studied the complex relationship of hosts and guests in a variety of cultures, from Native Americans and Bedouin shaykhs to families more or less like his own. “Both extending and receiving hospitality involve us in transactions of power and respect. They trigger contradictory emotions—pride, desire, jealousy, excitement, shame, and fear.”

The complex nature of the relationship is expressed in various proverbs, according to Shryock. In “Poor Richard’s Almanack,” Benjamin Franklin famously said, “Fish and visitors smell in three days.” The Balga Bedouin of Jordan that Shryock studied are a bit more generous, allowing guests to stay for “three days and a third.”

“Jordanians often say that the guest is prisoner of the host,” he said. “What they mean is that visitors are treated well, but their mobility is limited. They cannot move freely about or help themselves to food and drink. They depend on their hosts to provide what they need.”

According to Shryock, Jordanians and others with a strong tradition of providing hospitality to visitors find it interesting that Americans tell guests to help themselves instead of waiting on them. They also find it puzzling that Americans take “no” for an answer when offering refreshments or extending an invitation, instead of asking repeatedly, allowing the polite guest to decline repeatedly before agreeing to accept another glass of wine or come over for dinner.

Stagecraft is essential to the management of guest-host relationships, Shryock says. In Jordanian homes, there is almost always a special space set aside for entertaining guests, who receive the best cups, plates, utensils, tea, coffee and food. Sometimes there is a separate guest hall next to the house.

“When Jordanians say, ‘Our house is your house,’ they do not mean all of it,” Shryock said. “They mean just the part of it that forms the stage for hospitality.”

Americans today may not have special rooms set aside for guests, like the parlors of old, but typically certain areas of their homes are off-limits for guests, while other areas are cleaned and decorated, especially for guests to appreciate.

The reasons for these preparations are reflected in another proverb, Shryock says.

“Jordanians also say, ‘The host must fear the guest. When he sits [and shares your food], he is company. When he stands [and leaves your house], he is a poet,'” he said. “In other words, guests will make your reputation or break it, so you have to handle them with care.”

Negotiating the various rules of hospitality during the holidays can be difficult even for an expert, Shryock admits.

“Right now I’m going through a transition that a lot of Americans go through as adults,” he said. “When I was growing up, it was our family tradition to have Thanksgiving in the Ozarks, with my mother’s family. Then my mom and her siblings became their own centers of gravity. And now it’s our tradition, my wife Sally and I, to alternate holidays with her parents and with mine, in a carefully articulated sequence, so that no one feels they are being neglected.

“So we will be guests this Thanksgiving. But not in the Jordanian sense. We won’t be waited on. We will contribute dishes and help clean up. A lot of this work will be done by women. For many Americans, the centrality of women to the Thanksgiving holiday is very pronounced. People think this is changing, but some traditions change faster than others.

“An experience Sally and I had some years ago highlights the relationship between gender and Thanksgiving. We couldn’t go home; we had too much work to do. So it was just us and our daughter, who was three years old at the time. As the day approached, Sally started feeling increasingly guilty that we weren’t making enough of a fuss. So she told me to go out and buy a turkey, just a little one. Well, they were sold out at the market. When I came home empty-handed, she said, go to Boston Market and buy one there.

“So I got there the afternoon before Thanksgiving, and there’s a line all around the store—all men. Not a single woman in the line. And I thought, all these pathetic single guys, but no, it turns out they’ve all been sent out by their wives or partners to buy some turkey and bring it home. I started wondering why everyone in line was a man, and one guy said, ‘My wife said she’d rather die than be seen buying Thanksgiving dinner.’ So we all laughed and joked about being sent out to hunt dinner for our women and children. But the underlying reason we were there was that our spouses felt shame about not preparing a meal from scratch. And we didn’t.”