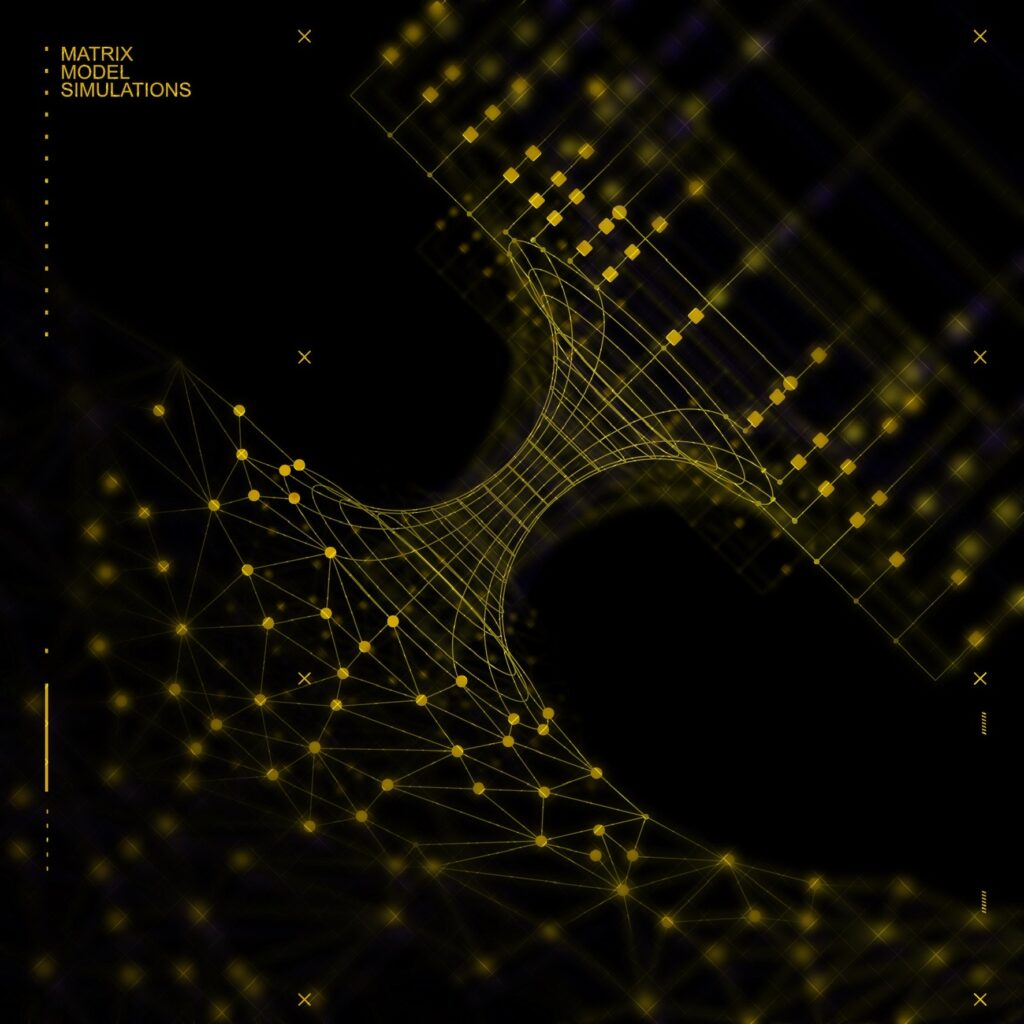 Enrico Rinaldi, research scientist in the University of Michigan Department of Physics, is using two simulation methods to solve quantum matrix models which can describe what the gravity of a black hole looks like. In this image, a pictorial representation of curved space time connects the two simulation methods. On the bottom, a deep learning method is represented by graphs of points (neural network), while the quantum circuit method on top is represented by lines, squares and circles (qubits and gates). The simulation methods merge with each side of the curved space time to represent the fact that gravity properties come out of the simulations. Rinaldi is based in Tokyo and hosted by the Theoretical Quantum Physics Laboratory at the Cluster for Pioneering Research at RIKEN, Wako. Image credit: Enrico Rinaldi/U-M, RIKEN and A. Silvestri

Dude, what if everything around us was just … a hologram?

The thing is, it could be—and a University of Michigan physicist is using quantum computing and machine learning to better understand the idea, called holographic duality.

Some scientists theorize our entire universe is a holographic projection of particles, and this could lead to a consistent quantum theory of gravity.

“In Einstein’s General Relativity theory, there are no particles—there’s just space-time. And in the Standard Model of particle physics, there’s no gravity, there’s just particles,” said Enrico Rinaldi, a research scientist in the U-M Department of Physics. “Connecting the two different theories is a longstanding issue in physics—something people have been trying to do since the last century.”

In a study published in the journal PRX Quantum, Rinaldi and his co-authors examine how to probe holographic duality using quantum computing and deep learning to find the lowest energy state of mathematical problems called quantum matrix models.

For the study, Rinaldi and his team used two matrix models simple enough to be solved using traditional methods, but which have all of the features of more complicated matrix models used to describe black holes through the holographic duality.

“We hope that by understanding the properties of this particle theory through the numerical experiments, we understand something about gravity,” said Rinaldi, who is based in Tokyo and hosted by the Theoretical Quantum Physics Laboratory at the Cluster for Pioneering Research at RIKEN, Wako. “Unfortunately it’s still not easy to solve the particle theories. And that’s where the computers can help us.”

These matrix models are blocks of numbers that represent objects in string theory, which is a framework in which particles in particle theory are represented by one-dimensional strings. When researchers solve matrix models like these, they are trying to find the specific configuration of particles in the system that represent the system’s lowest energy state, called the ground state. In the ground state, nothing happens to the system unless you add something to it that perturbs it.

You can think of the numbers in the matrix models as grains of sand, Rinaldi says. When the sand is level, that’s the model’s ground state. But if there are ripples in the sand, you have to find a way to level them out. To solve this, the researchers first looked to quantum circuits. In this method, the quantum circuits are represented by wires, and each qubit, or bit of quantum information, is a wire. On top of the wires are gates, which are quantum operations dictating how information will pass along the wires.

“You can read them as music, going from left to right,” Rinaldi said. “If you read it as music, you’re basically transforming the qubits from the beginning into something new each step. But you don’t know which operations you should do as you go along, which notes to play. The shaking process will tweak all these gates to make them take the correct form such that at the end of the entire process, you reach the ground state. So you have all this music, and if you play it right, at the end, you have the ground state.”

The researchers then wanted to compare using this quantum circuit method to using a deep learning method. Deep learning is a kind of machine learning that uses a neural network approach—a series of algorithms that tries to find relationships in data, similar to how the human brain works.

Neural networks are used to design facial recognition software by being fed thousands of images of faces—from which they draw particular landmarks of the face in order to recognize individual images or generate new faces of persons who do not exist.

In Rinaldi’s study, the researchers define the mathematical description of the quantum state of their matrix model, called the quantum wave function. Then they use a special neural network in order to find the wave function of the matrix with the lowest possible energy—its ground state. The numbers of the neural network run through an iterative “optimization” process to find the matrix model’s ground state, tapping the bucket of sand so all of its grains are leveled.

In both approaches, the researchers were able to find the ground state of both matrix models they examined, but the quantum circuits are limited by a small number of qubits. Current quantum hardware can only handle a few dozens of qubits: adding lines to your music sheet becomes expensive, and the more you add the less precisely you can play the music.

“Other methods people typically use can find the energy of the ground state but not the entire structure of the wave function,” Rinaldi said. “We have shown how to get the full information about the ground state using these new emerging technologies, quantum computers and deep learning.

“Because these matrices are one possible representation for a special type of black hole, if we know how the matrices are arranged and what their properties are, we can know, for example, what a black hole looks like on the inside. What is on the event horizon for a black hole? Where does it come from? Answering these questions would be a step towards realizing a quantum theory of gravity.”

The results, says Rinaldi, show an important benchmark for future work on quantum and machine learning algorithms that researchers can use to study quantum gravity through the idea of holographic duality.

Next, Rinaldi is working with Nori and Hanada to study how the results of these algorithms can scale to larger matrices, as well as how robust they are against the introduction of “noisy” effects, or interferences that can introduce errors.