When it comes to energy’s environmental impact, Southerners think differently 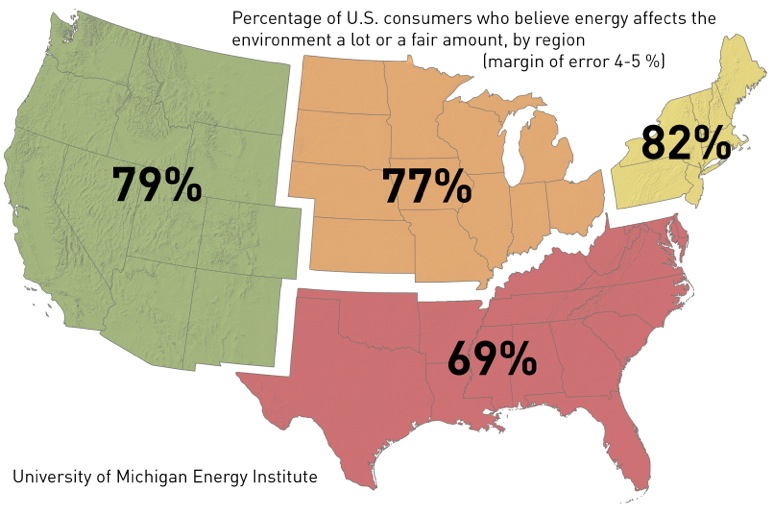 ANN ARBOR—Southerners are less likely than Americans in other parts of the country to believe that energy affects the environment by at least a fair amount, according to the latest findings of the University of Michigan Energy Survey.

A joint effort of the U-M Energy Institute and Institute for Social Research, the quarterly survey gauges consumer perceptions and beliefs about key energy-related concerns including affordability, reliability and impact on the environment.

Southerners do not differ significantly from other regions in their responses to the survey’s other questions concerning reliability or affordability and, on average, they pay about the same amount for home energy as the nation as a whole (Westerners pay the least).

“Although their perception of energy’s impact on the environment is a bit less than the national average, the fraction of Southerners who believe that energy affects the environment by at least a fair amount still exceeds two-thirds,” said survey director John DeCicco, a research professor at the U-M Energy Institute.

Nationwide, three-fourths of Americans believe that energy affects the environment either a fair amount or a lot, a finding that has held up over the three rounds of U-M Energy Survey data analyzed to date.

Other results from data collected through the latest energy survey include:

The U-M Energy Survey is administered four times a year through a set of questions added quarterly to the Thomson Reuters/University of Michigan Surveys of Consumers, the same instrument that is the basis for the widely reported Index of Consumer Sentiment. The survey is conducted through telephone interviews of a nationally representative sample of roughly 500 households per month. Visit: http://bit.ly/1cVdy9t

University of Michigan Energy Institute
The demand for economically and environmentally sound energy solutions is urgent and global. The Energy Institute builds on U-M’s strong energy research heritage at the heart of the nation’s automotive and manufacturing industries to develop and integrate science, technology and policy solutions to pressing energy challenges. Visit: http://energy.umich.edu

Thomson Reuters/University of Michigan Surveys of Consumers
Based on telephone interviews with 500 U.S. households conducted every month, the Surveys of Consumers is a rotating panel survey based on a nationally representative sample that gives each household in the coterminous U.S. an equal probability of being selected. Visit: www.sca.isr.umich.edu