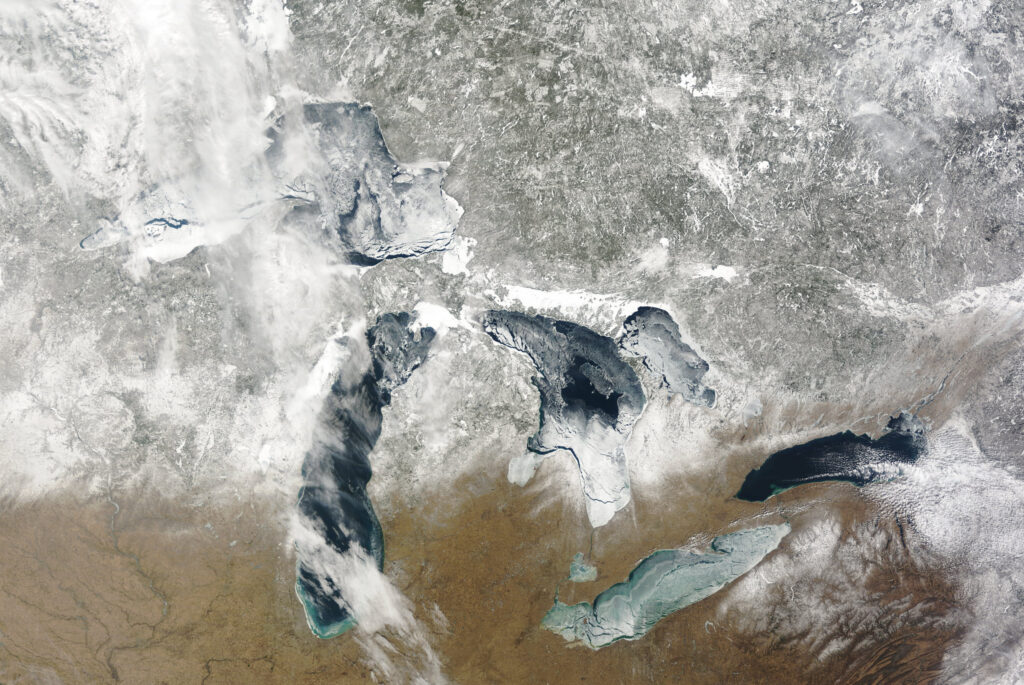 Nearly all scientific sampling of the Great Lakes is done between May and October, when the lakes are free of ice and the water is warmer.

But this month, scientists from more than a dozen U.S. and Canadian institutions will brave the elements to sample all five Great Lakes and Lake St. Clair in a first-of-its-kind coordinated campaign called the Winter Grab.

Teams will drill through ice to collect water samples, measure light levels at various depths and net tiny zooplankton as part of a broader effort to better understand the changing face of winter on the Great Lakes, where climate warming is increasing winter air temperatures, decreasing ice-cover extent and changing precipitation patterns.

The specific goal of the Winter Grab is to help fill key wintertime knowledge gaps about ice properties, water movement, nutrient concentrations and lake biology. The event is funded in part by the Cooperative Institute for Great Lakes Research at the University of Michigan, a partnership with the National Oceanic and Atmospheric Administration.

“Winter is rapidly changing on the Great Lakes, but our ability to understand and predict the consequences of those changes is impeded by a shortage of winter-period studies on most aspects of Great Lakes limnology,” said lake biologist and Winter Grab project leader Ted Ozersky of the University of Minnesota Duluth.

More than two dozen researchers will travel on foot, by snowmobile and in all-terrain vehicles and sleds—one team is even planning to use a fan-driven airboat to glide across the ice—to collect samples at 20 to 30 locations during the week of Feb. 14, the date that historically marked peak ice cover extent on the Great Lakes. Some scientists will hitch rides aboard U.S. and Canadian Coast Guard icebreakers.

“We’re taking a snapshot of the Great Lakes at the peak of winter, and we’re hoping this will kick-start increased interest in wintertime research,” said Ozersky, who studies aquatic food webs, nutrient dynamics, invasive species and climate change.

After a warm December, this winter had been on track for a near-record low in Great Lakes ice cover. But the ice rebounded significantly during a frigid January, providing a boost for Winter Grab participants, according to U-M biogeochemist Casey Godwin of the Cooperative Institute for Great Lakes Research and the School for Environment and Sustainability.

“The ice forecasts changed in our favor. Right now, they suggest that more of the locations that we’d like to target might have ice,” said Godwin, who studies Great Lakes water quality.

U-M scientists and their colleagues at NOAA’s Great Lakes Environmental Research Laboratory sample regularly in western Lake Erie and in Lake Huron’s Saginaw Bay during nonwinter months. For the Winter Grab, Godwin will be part of a U-M team heading onto the ice of Saginaw Bay in an all-terrain vehicle hauling a sled loaded with gear. Meanwhile, a crew from the NOAA lab will ride a fan-powered airboat to collect samples from western Lake Erie.

“NOAA and U-M sample intensively in western Lake Erie during the summer,” said NOAA aquatic ecologist Ashley Elgin, who studies invasive species in the Great Lakes with a focus on zebra and quagga mussels. “Expanding our Lake Erie monitoring to include winter measurements is highly valuable because winter conditions influence summer events such as harmful algal blooms and episodes of low oxygen.”

Ozersky proposed the Winter Grab and helped create a new multi-institutional research collaboration called the Great Lakes Winter Network, or GLWiN. During the upcoming event, his team will collect samples from the Apostle Islands on Lake Superior’s south shore and at Wisconsin’s Green Bay.

The Winter Grab is an outgrowth of a Cooperative Institute for Great Lakes Research-sponsored winter limnology summit held in Ann Arbor in 2019. Limnology is the study of lakes and other bodies of freshwater.

At the meeting, Great Lakes scientists discussed the gaping knowledge gaps that surround basic physical, chemical and biological processes on the Great Lakes during the winter. A new focus on winter science was clearly needed, and the rapid pace of Great Lakes changes created a sense of urgency.

The meeting led to a May 2021 review article in the Journal of Geophysical Research: Biogeosciences, by Ozersky and 23 co-authors, titled “The Changing Face of Winter: Lessons and Questions From the Laurentian Great Lakes.”

The scarcity of winter research on the Great Lakes has two main causes, according to the study authors. The first is the logistical difficulty of conducting Great Lakes fieldwork in the winter, when gale force winds and unstable ice keep most research vessels in port and instrumented surface buoys on shore. 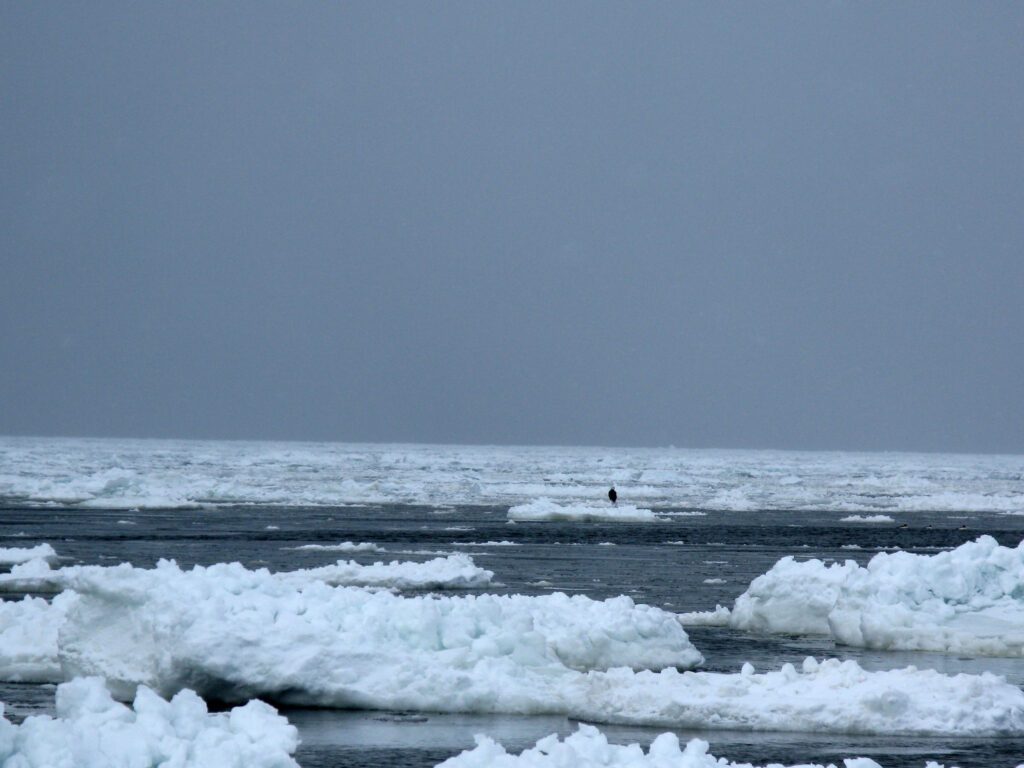 During the Winter Grab, Ozersky said all members of his team will wear either a flotation suit or a life jacket when walking on the ice. They will check ice thickness frequently, and each person will carry a pair of “ice spikes,” hand-held ice picks used for self-rescue in the event of an accident.

The second reason for the lack of wintertime Great Lakes research is a longstanding belief among many limnologists that little of importance happens in lakes during the winter, a season long viewed as a time of dormancy and senescence.

But recent studies have begun to challenge that assumption. For example, satellite observations show that months-long algae blooms occur in Lake Erie’s central basin during the dead of winter, Godwin said.

Of all the winter changes underway on the Great Lakes, the ongoing reduction in ice-cover extent is of paramount importance to these scientists. They call ice cover a “master variable” because it controls many aspects of wintertime lake ecology and impacts lake processes in subsequent seasons, as well.

Over the past four decades, the Great Lakes have experienced a significant decrease in the extent and duration of ice cover. Some projections suggest that Great Lakes ice cover may become a rare occurrence by the end of this century.

“Winter is the season that is altered the most with climate change,” said ecosystem ecologist Marguerite Xenopoulos of Trent University in Peterborough, Ontario. During the Winter Grab, she will collect samples on Lake Ontario’s Bay of Quinte and from Georgian Bay on the Canadian side of Lake Huron.

“With the loss of snow and ice cover, the need for winter research has never been greater, particularly to help inform management decisions,” said Xenopoulos, who studies carbon and nutrients in lakes and rivers.

Research teams will use gas- or battery-powered augers to bore through the ice and will record ice thickness and water depth. They will determine how snow and ice affect light levels at various depths by lowering light sensors into the holes. Water samples will be collected for nutrient analysis, and fine-meshed nets will be used to gather zooplankton from the water column. 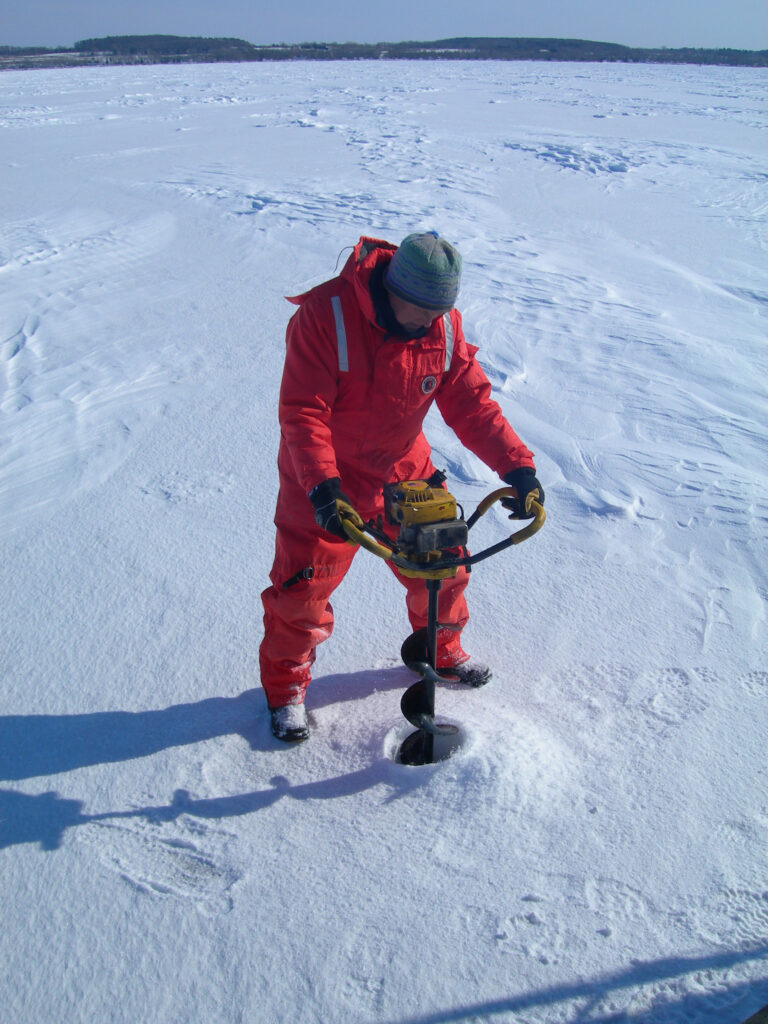 In places where ice has not yet formed, scientists will sample the water from piers. Later, about 20 types of laboratory analyses will be done on all the Winter Grab samples. The work is expected to lead to peer-reviewed publications and new grant proposals.

In coming years, with sufficient funding, Great Lakes winter research could be expanded to include the use of dedicated ice-strengthened or ice-breaking research vessels—perhaps even the deployment of autonomous sensor platforms beneath the ice, Ozersky said. Closing the wintertime blind spot on the Great Lakes, the world’s largest freshwater ecosystem, will also require broader recognition of the value of such work and greater collaboration between scientists, he said.

“After all, how can we predict and manage the future of an ecosystem if we do not understand how it functions for significant portions of the year?” he said.