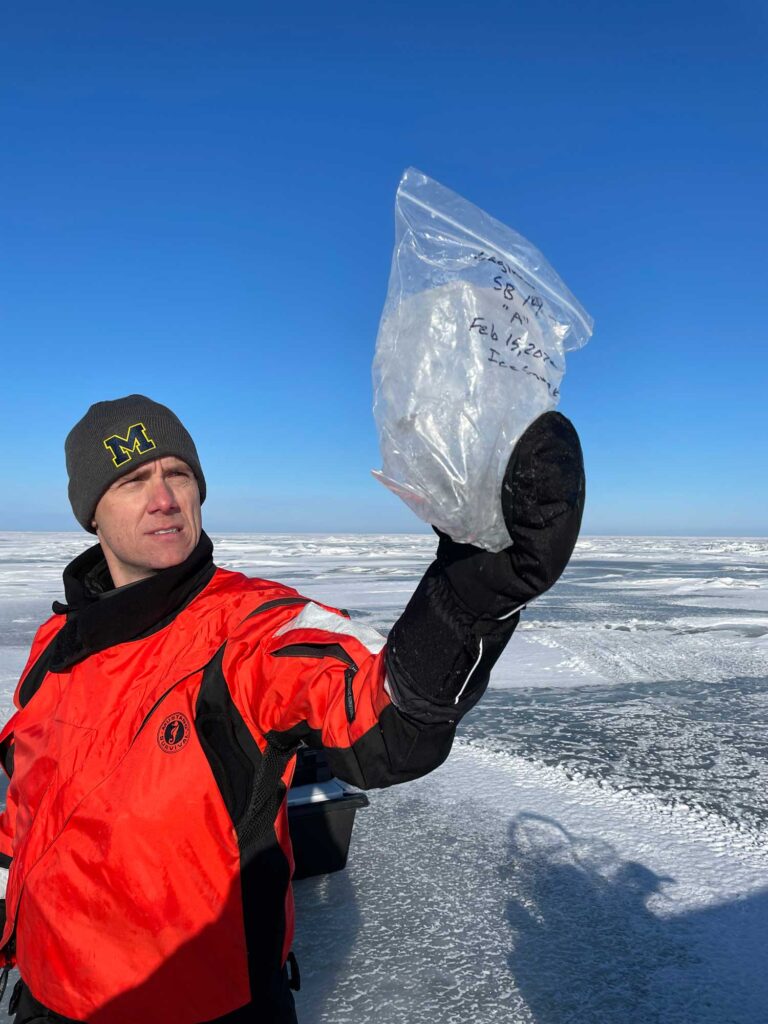 University of Michigan biogeochemist Casey Godwin raises a football-size chunk of crystal-clear Great Lakes ice toward the sky and studies it. The ice was plucked from the Saginaw Bay surface during a Feb. 15 trip to collect ice and water samples for the Winter Grab coordinated campaign. This sample was melted and used to measure dissolved substances in the ice. Image credit: Michigan News

SAGINAW BAY—University of Michigan biogeochemist Casey Godwin raises a football-size chunk of crystal-clear Great Lakes ice toward the sky and studies it like a miner inspecting a precious gemstone just pulled from the earth.

Godwin’s team snowmobiled 5 miles from the shore of Lake Huron’s Saginaw Bay, with morning temperatures in the upper teens, then bored through 19 inches of ice to collect this sparkling specimen and to sample the lake water beneath it.

More than 30 types of laboratory analyses will be performed on the water and ice as part of a larger effort—dubbed the Winter Grab—to better understand winter on the Great Lakes, a season long dismissed by many scientists as a time of dormancy when little of importance happens.

“One of the reasons we’re out doing this Winter Grab today is that we’re increasingly understanding that the lake is not dormant in the winter. The water beneath this ice is very much active,” said Godwin, a member of the research faculty at U-M’s Cooperative Institute for Great Lakes Research (CIGLR) and the School for Environment and Sustainability.

During the Feb. 15 trip, Godwin and his team found high light levels beneath the ice and abundant dissolved oxygen in the water, suggesting that photosynthetic algae were hard at work, even in the dead of winter.

“The biggest surprise for me was how much dissolved oxygen was under the ice, despite it being very thick,” Godwin said afterward. “There is tons of light down there. The algae are doing photosynthesis with that light and making food for the rest of the food web—for the zooplankton that feed the fish but also for the quagga mussels.”

Teams from 19 U.S. and Canadian institutions braved the elements to sample at 35 sites on all five Great Lakes during the Winter Grab, a first-of-its-kind coordinated winter sampling campaign. The event was proposed by University of Minnesota Duluth lake biologist Ted Ozersky and was funded in part by CIGLR, a partnership with the National Oceanic and Atmospheric Administration.

On Saginaw Bay, team members drilled through ice with a battery-powered auger to collect water and ice and to measure temperature, light levels and oxygen concentrations at various depths. They used an optical sensor to identify the algal species in the water column and a pressure sensor to measure water depth (12 feet at the first site, a bit less at the second).

They captured tiny zooplankton in a fine-meshed, conical net and grabbed muddy bottom sediments, all in an effort to better understand the changing face of winter on the Great Lakes, where climate warming is increasing winter air temperatures, decreasing ice-cover extent and changing precipitation patterns.

And while many of the Winter Grab teams collected samples close to shore, U-M researchers snowmobiled nearly 20 miles, round trip, to visit two sites on the east side of Saginaw Bay. 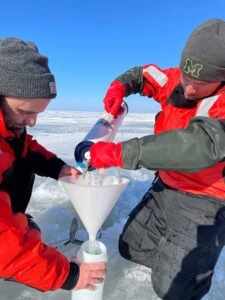 Why travel so far on a cold mid-February morning?

Because U-M scientists and their research partners at NOAA have been sampling Saginaw Bay by boat in nonwinter months continuously since the 1990s. The Winter Grab samples were collected at two of those long-term sampling sites and will extend that record.

“We spend a lot of time and energy sampling and monitoring the lakes from April to October, but we know very little about what happens the rest of the year and how it might impact the open-water season,” Godwin said. “We need to be out here in the winter to collect the samples and make the measurements needed to understand it.”

Saginaw Bay has a long history of environmental degradation due to industrial development and nutrient runoff—mainly phosphorus—from croplands in the watershed. The bay has had summer algal blooms since the 1970s, though they are not as big and receive less attention than the blooms in western Lake Erie.

During the February trip, Godwin and two members of the CIGLR staff, research engineer Hayden Henderson and benthic ecology research technician Andrew Camilleri, loaded gear into plastic sleds that were hauled behind three snowmobiles. The U-M team and their guide, Ken Rice of Legend Killer Charters, headed onto the lake from an access point near Fish Point, about 20 miles northeast of Bay City.

The sky was a clear, deep blue overhead with scattered, puffy cumulus clouds on the horizon and a gentle breeze from the south. Pillars of steam rose from smokestacks to the southwest, and giant white wind turbines were scattered along the shoreline on the east side of the bay.

The surface of the bay was a patchwork of windblown snow, glossy grayish ice and a craggy, crusty mix of the two. In some places, shards of wind-driven ice formed jumbled mounds, called ice shelves or ice ridges, up to 10 feet tall.

Shells of quagga and zebra mussels were embedded in surface ice in some spots, likely the result of a storm that churned lake-bottom sediments. The snowmobiles rumbled over the bumpy surface as Rice followed GPS coordinates and a network of snowmobile trails used by ice fishermen.

At the sampling sites, the researchers deployed an impressive array of high-tech gadgetry. But when it came time to measure the thickness of the ice, a distinctly low-tech tool was used: a common tape measure.

“I’m measuring the thickness of the ice, and that can be important because it can affect the amount of light that’s available to primary producers” such as algae, said Camilleri, as he knelt beside a hole in the ice and poked the tape measure into the water. “We’ve got 48 centimeters or 19 inches thickness.”

Henderson and Camilleri teamed up to collect bottom sediments using a jawed, stainless-steel device called a Petite Ponar grab sampler, which looks a bit like one of those claw-crane arcade games used to hunt for candy and trinkets. But in this case, the prize is mud and fingernail-size quagga mussels. 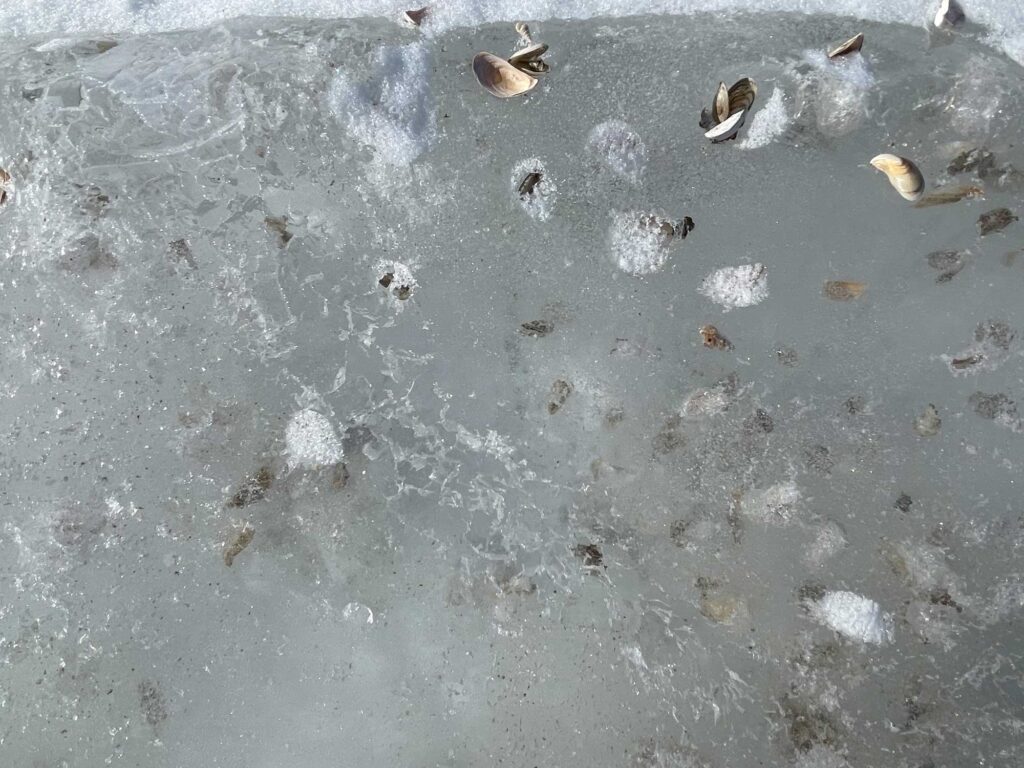 “When the Ponar hits the bottom, we’re going to pull it shut to collect bottom sediment that we’ll bring to the surface,” Henderson said.

“We’re looking for quagga and zebra mussels,” Camilleri added. “We’re going to take those back to the lab to see how they’re doing under the ice.”

Saginaw Bay was an important study site during the initial zebra mussel invasion in the 1990s, and scientists from CIGLR and GLERL continue to monitor the mussel populations there, as well as nutrient levels in the water and the severity and extent of summer algal blooms.

Elgin and her team measured the size of the Winter Grab mussel shells and the amount of tissue inside to determine body condition, then compared those measurements to data from other seasons. Though based on a very small number of winter specimens, the comparison suggests that mussels may build tissue mass during the winter, Elgin said.

This summer, scientists aboard the R/V Lake Guardian, a U.S. Environmental Protection Agency research vessel, will study bottom-dwelling organisms across all of Lake Huron. To supplement that effort, Elgin and her team will use a NOAA vessel for a study focusing specifically on invasive mussels in Saginaw Bay.

“Invasive quagga and zebra mussels have been a major driver of change in the Great Lakes. A better understanding of these mussels in all seasons will improve our ability to predict what their populations will do,” Elgin said.

Analysis of the algal communities in the Winter Grab water samples collected by Godwin’s team revealed mostly diatoms and green algae. Cyanobacteria, which are blamed for harmful summer algal blooms in both Saginaw Bay and Lake Erie, were not detected, Godwin said.

Nutrient analysis of the Saginaw Bay water will show how much phosphorus is available to algae during the winter and whether it includes a form that is easily used by the organisms.

“Even in the winter, streams and rivers in the watershed still carry nutrients into the lake,” Godwin said. “Even if a river is frozen on the surface, it’s not frozen at depth. The amount of nutrients entering the lake is reduced in the winter, but it does not stop.”

While Godwin’s team has already analyzed some of its samples, much of Winter Grab laboratory work for all 19 teams lies ahead, said University of Minnesota Duluth’s Ozersky, who proposed the event. The specific goal of the Winter Grab is to help fill key knowledge gaps about wintertime ice properties, water movement, nutrient concentrations and biology on the Great Lakes.

“Hopefully, we will have an interesting story we can share in six months to a year, either through conference presentations or publications,” Ozersky said.