Richard Rogel will be vice chair of Victors for Michigan campaign, chair effort to raise money for U-M Health System, and lead campaign for scholarships across the university 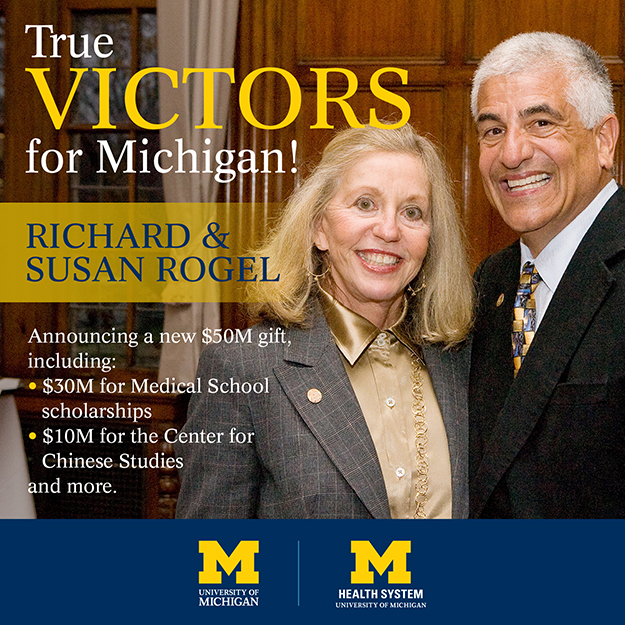 ANN ARBOR—Investor Richard Rogel and Susan Rogel want the best and the brightest future doctors to continue to come to the University of Michigan Medical School to study medicine and enter their chosen medical specialty free from debt. They also believe that strengthening the Chinese studies program at the university will lead to mutually beneficial engagement, research and global collaboration.

The Rogels will step up their already extraordinary commitment to the University with a $50 million gift toward these goals.

The gift—$30 million for scholarships at the U-M Medical School and $10 million in support for faculty, students and programs at the Center for Chinese Studies in the College of Literature, Science, and the Arts, plus $10 million for future university initiatives—comes as Richard Rogel takes on a leadership role in U-M’s new Victors for Michigan campaign, launching on Nov. 8.

He will serve as vice chair of the Victors for Michigan campaign and chair the Health System component of the broader campaign. In recognition of his ongoing commitment to keeping higher education affordable, he will lead the effort to raise $1 billion for the campaign’s highest priority, student support. For the Health System, he will lead the effort to garner support for education, patient care and research programs across the Medical School and the Hospitals and Health Centers.

“Rich and his wife Susan share our commitment to making it possible for extraordinary students to immerse themselves in their studies and research, and prepare for high-impact careers, without regard to cost or future debt,” President Mary Sue Coleman said. “On the eve of our campaign launch, the Rogels once again are demonstrating outstanding leadership with this new support for U-M students and global impact.”

The new gift brings the Rogels’ lifetime giving to U-M to nearly $76 million and places them among the university’s top donors. In 2000, they created a $22 million scholarship fund for students who, like Rich Rogel, come to U-M from out of state. Almost 500 students have received support.

The Rogels have given to many areas of UMHS, including the Comprehensive Cancer Center, the Medical School, and a medical innovation training program.

A native of New Jersey, Rogel graduated as the valedictorian of his 1970 class at what is now the U-M Stephen M. Ross School of Business. He went on to found an innovative company that provided a new option on an existing insurance plan, and to succeed as an investor.

“This university gave me so much, and Susan and I want to give back in ways that will make a difference to students and the Health System as a whole,” Rogel said. “With this gift, and my new role in the upcoming campaign, we hope to do our part to help all patients, now and tomorrow, who will be touched by the Health System’s care, discoveries and innovative minds. We hope others will do what they can, too.”

“Rich and Susan’s incredible devotion to our institution and belief in our potential to transform medicine through innovation in clinical care, education and medical discovery is an incredible gift in and of itself,” said Dr. Ora Pescovitz, the U-M executive vice president for medical affairs and CEO of the U-M Health System. “As the strain on our other funding sources increases, philanthropy of all kinds — and the campaign that Rich will chair — will be more vital than ever to ensuring our ability to train future physicians and scientists, produce groundbreaking discoveries and deliver excellent patient care.”

U-M Medical School Dean Dr. James O. Woolliscroft praised the Rogels’ focus on giving in a way that will help the most promising future doctors. “We look forward to fulfilling the Rogels’ vision of selecting the highest-achieving medical students for scholarships that will free them to fulfill their potential as physician leaders in a wide range of medical disciplines,” said Woolliscroft. “We also deeply appreciate Rich and Susan’s commitment to leading the effort to raise crucial support for our entire Health System.”

“U-M has had a long-standing, widely recognized leadership role in Chinese studies. Rich and Susan Rogel’s generous gift to the Center for Chinese Studies will renew our commitment and infuse the center with resources required to lead the nation in teaching, research, and service to enhance understanding of China and to train major scholars and leaders of the future,” said Susan Gelman, interim dean of the College of Literature, Science, and the Arts. “With this gift, the center will be able to partner with colleagues in China to develop richer understandings and collaborations for faculty and students.”

The center’s director, Mary Gallagher, says the gift comes as many areas of U-M, including the Medical School, form valuable academic bonds with institutions in China. “The Rogel gift is a transformative one because it comes at a critical time for area studies and for the future of U.S.-China relations,” she said. “The gift will allow us to enhance significantly our programming for the university and the larger community and to increase our support for faculty research and student training.”

Medical student scholarships: Bringing the best and the brightest to Michigan

Making a U-M education affordable is the top priority of the Victors for Michigan campaign. Medical education is part of that university-wide goal of raising $1 billion in student support.

Currently, half of U-M’s 692 medical students receive some scholarship or grant support, including one student who holds a scholarship previously endowed by the Rogels.

But with tuition and fees for a Michigan medical education currently at $30,000 a year for in-state students and $48,000 a year for out-of-state students, most students graduate with large loans they must repay over time as they launch their careers. The Medical School has been working to keep that load as low as possible. Nationally, the steep debt faced by graduating medical students is thought to influence what medical or surgical specialty they choose for post-graduation residency.

The Rogel gift will allow the Medical School to provide generous scholarship support to outstanding students and take debt out of the equation as they select a career path. It is the largest gift to support Medical School scholarships in U-M’s history.

The portion of the new gift devoted to the Center for Chinese Studies in LSA will build an endowment that will help U-M engage new faculty and students, and the broader U-M community, in China-related activities. Founded more than a half century ago, the Center for Chinese Studies has become one of the nation’s preeminent centers for the study of China

The endowment will be used for everything from support for new U-M faculty and visiting scholars from China, to funds that will allow U-M graduate students to travel to China – as well as lectures open to all. The Rogels’ gift will enhance U-M’s ability to study, interpret and share new knowledge about the nation and its people.

Rogel brings to the new campaign his experience as chair of the Michigan Difference Campaign – which raised $3.2 billion for U-M and ran from 2004-2008.

All three campuses and every unit of U-M will participate in the Victors for Michigan campaign to raise funds for some or all of three priorities: Student support, engaged learning and bold ideas.

The second priority is to extend learning beyond the classroom to provide a global purview and to encourage a creative, entrepreneurial mindset. Such experiences can occur in nearby communities like Detroit and Flint, or across the globe.

The third priority, linked to U-M’s responsibility as a public university, is to collaborate on bold ideas to address the world’s most challenging problems, such as sustainability, K-12 education, and cancer.

The Rogels’ gift demonstrates their commitment to making a U-M education affordable to students and their understanding of the importance of a global perspective to an excellent educational experience.

More about Richard and Susan Rogel:

Richard Rogel is a member of the Health System Advisory Group, a group of external volunteer advisors who provide strategic counsel and input on a variety of matters relevant to the Health System’s tripartite mission of clinical care, research and education. He also serves on the National Advisory Board of the U-M Frankel Cardiovascular Center and the U-M Comprehensive Cancer Center’s Pancreatic Cancer Board of Directors.

He serves on the President’s Advisory Group, the University Musical Society Senate, the Social Work Development Committee Campaign Taskforce, the Advisory Board of the Samuel Zell and Robert H. Lurie Institute for Entrepreneurial Studies, the Greater Detroit Leadership Gift Committee, and the Campaign Committee of the U-M Alumni Association. He is also a former president of the Alumni Association Board of Governors. He received an honorary Doctor of Laws degree in 2009.

Nearly 500 U-M students from out-of-state have been selected to receive scholarships funded by previous gifts from the Rogels – including 64 current students who hold Rogel Awards of Excellence. Richard Rogel’s high level of commitment to U-M led to his being awarded the 2011 Ernest T. Stewart Award for Alumni Volunteer Involvement from CASE, the Council for Advancement and Support of Education. He received U-M’s inaugural David B. Hermelin Award for Fundraising Volunteer leadership in 2004, the university’s highest award to volunteers.

Susan Rogel will serve on the Steering Committee of the Victors for Michigan Campaign Leadership Board. She has served on the Alumni Association Campaign Committee and the Mott Hospital Leadership Team.

The Rogels live in Avon, Colorado, where Richard Rogel serves as president of the investing firm Tomay Inc. He is the former chairman and CEO of the Preferred Provider Organization of Michigan, one of the first PPO health firms in the country.