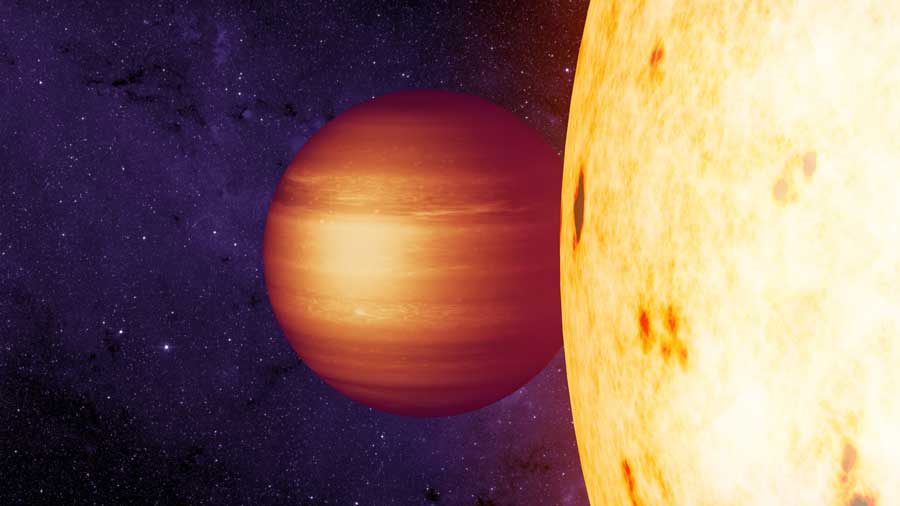 ANN ARBOR—A giant planet’s unexpected wind direction is presenting a mystery for astronomers that could upend what researchers have understood about the atmospheres of these types of planets.

“Hot Jupiters” are distant planets that, like our Jupiter, are very large and gaseous. But unlike our Jupiter, they orbit their host stars very closely—closer than Mercury orbits our own sun. Winds within their atmospheres typically blow from west to east. But astronomers, including a University of Michigan researcher, have discovered that one hot Jupiter’s winds are blowing in the opposite direction.

Winds on these types of planets seem to be dictated by the planet’s close orbit. This close orbit causes the planets to be tidally synchronized, which means, like our moon to Earth, the same side of the planet faces the star no matter where it is in its orbit.

“It’s a really extreme situation where you have one side of the planet being blasted with stellar radiation and the other side is in perpetual night,” said Emily Rauscher, U-M astronomer and co-investigator on the project. “You have this gaseous atmosphere that’s going to respond by having warm air flow around to the cold side of the planet.”

In this study, the astronomers observed that winds shift in the opposite direction from what they normally see and have seen for the last decade. A research team led by astronomers at McGill University’s McGill Space Institute and the Institute for Research on Exoplanets in Montreal made the discovery using NASA’s Spitzer Space Telescope. Their findings are reported Jan. 22 in the journal Nature Astronomy.

“We’ve previously studied nine other hot Jupiter, giant planets orbiting super close to their star. In every case, they have had winds blowing to the east, as theory would predict,” says McGill astronomer Nicolas Cowan, a co-author on the study. “On this planet, the wind blows the wrong way. We’re hoping that studying this planet will help us understand what makes hot Jupiters tick.”

The planet in question, CoRoT-2b, was discovered a decade ago by a French-led space observatory mission and is 930 light years from Earth. While many other hot Jupiters have been detected in recent years, CoRoT-2b has continued to intrigue astronomers because of two factors: its inflated size and the puzzling spectrum of light emissions from its surface.

“Both of these factors suggest there is something unusual happening in the atmosphere of this hot Jupiter,” says Lisa Dang, a doctoral student at McGill University and lead author of the study.

By using Spitzer’s Infrared Array Camera to observe the planet while it completed an orbit around its host star, the researchers were able to map the planet’s surface brightness for the first time, revealing the westward hot spot.

“The immediate question is well, why?” Rauscher said. “For the last decade or so, we thought we understood that hot Jupiters always did this eastward flow. What is different about this planet—what are we not understanding?”

The astronomers have three theories about why this planet’s winds are behaving in this way. First, they theorize they are incorrect in thinking the planet is tidally synchronized. If its rotation rate is slightly different, it could affect the direction of the winds, according to previous work by Rauscher.

Third, astronomers are starting to suspect that hot Jupiters may have partial cloud cover, and clouds on these types of planet may behave completely differently than clouds on Earth. They may be permanently situated over one part of the planet, inducing winds in a specific direction.

In any case, the discovery provides a mystery for astronomers to tackle—one that might inform their ability to search for an Earth-like planet.

“For many people, a driving aspect of exoplanet study is the path to finding another Earth-like planet. If you want to say that a planet is actually Earth-like, a large part of that is saying it has an atmosphere similar to ours,” Rauscher said. “If we want to be able to understand atmospheres in planets in general, then we need for our theories and our computer models to be able to accurately predict or explain the atmospheres of all planets, everywhere.”