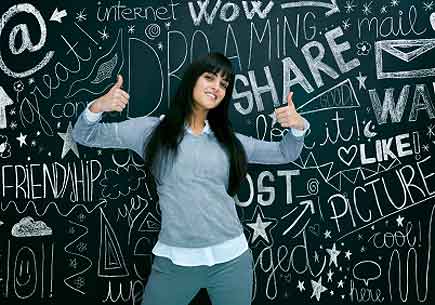 ANN ARBOR—Facebook is a mirror and Twitter is a megaphone, according to a new University of Michigan study exploring how social media reflect and amplify the culture’s growing levels of narcissism.

“Among young adult college students, we found that those who scored higher in certain types of narcissism posted more often on Twitter,” said Panek, who recently received his doctorate in communication studies from U-M and will join Drexel University this fall as a visiting fellow.

“But among middle-aged adults from the general population, narcissists posted more frequent status updates on Facebook.”

According to Panek, Facebook serves narcissistic adults as a mirror.

“It’s about curating your own image, how you are seen, and also checking on how others respond to this image,” he said. “Middle-aged adults usually have already formed their social selves, and they use social media to gain approval from those who are already in their social circles.”

For narcissistic college students, the social media tool of choice is the megaphone of Twitter.

“Young people may overevaluate the importance of their own opinions,” Panek said. “Through Twitter, they’re trying to broaden their social circles and broadcast their views about a wide range of topics and issues.”

The researchers examined whether narcissism was related to the amount of daily Facebook and Twitter posting and to the amount of time spent on each social media site, including reading the posts and comments of others.

For one part of the study, the researchers recruited 486 college undergraduates. Three-quarters were female and the median age was 19. Participants answered questions about the extent of their social media use, and also took a personality assessment measuring different aspects of narcissism, including exhibitionism, exploitativeness, superiority, authority and self-sufficiency.

For the second part of the study, the researchers asked 93 adults, mostly white females, with an average age of 35, to complete an online survey.

According to Panek, the study shows that narcissistic college students and their adult counterparts use social media in different ways to boost their egos and control others’ perceptions of them.

“It’s important to analyze how often social media users actually post updates on sites, along with how much time they spend reading the posts and comments of others,” he said.

Funding for the study comes in part from The Character Project, sponsored by Wake Forest University via the John Templeton Foundation.