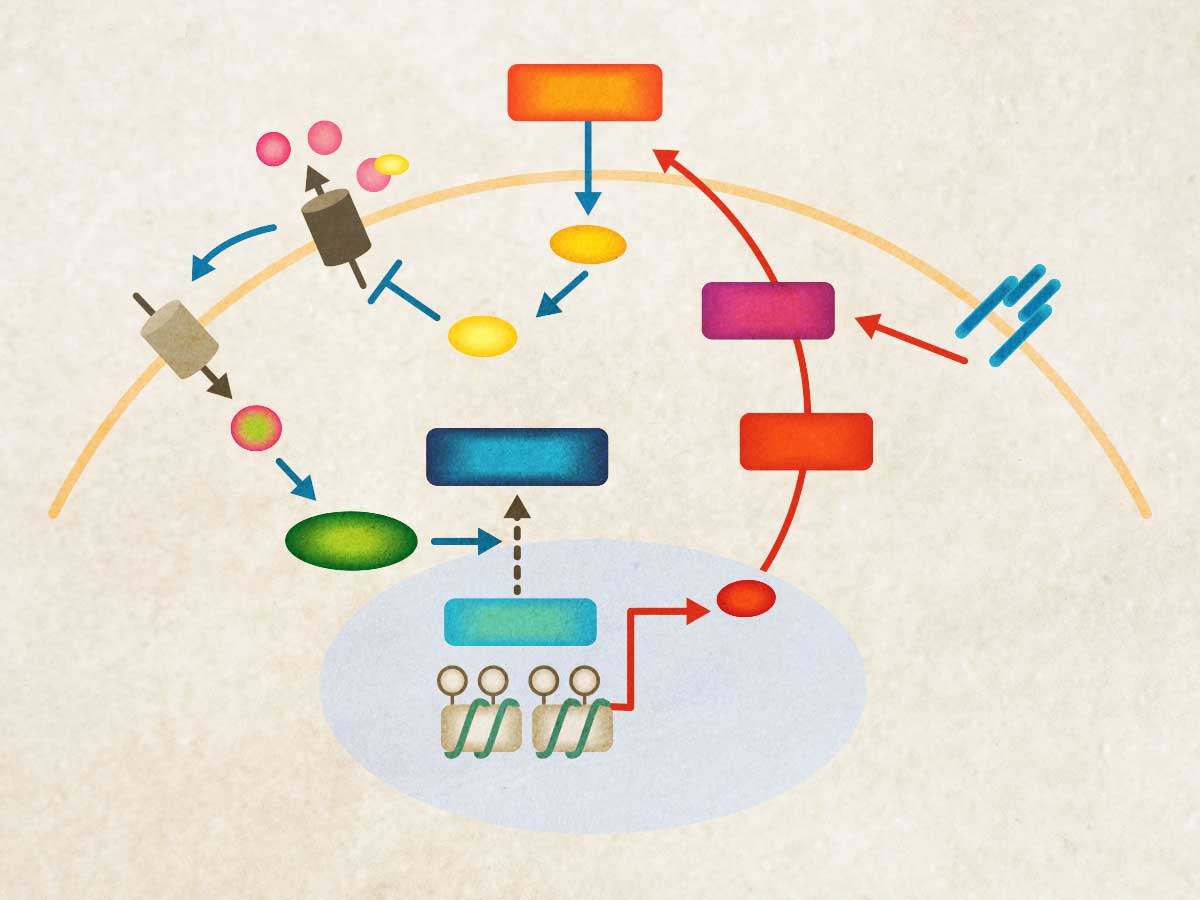 An illustration of the Baf60c-Deptor-AKT signaling pathway identified as a target of myocyte glucose sensing that augments muscle insulin action. Image credit: Stephanie King/LSIANN ARBOR—It’s obvious that the taste buds on the tongue can detect sugar. And after a meal, beta cells in the pancreas sense rising blood glucose and release the hormone insulin—which helps the sugar enter cells, where it can be used by the body for energy.

Now researchers at the University of Michigan Life Sciences Institute have uncovered an unexpected mechanism of glucose sensing in skeletal muscles that contributes to the body’s overall regulation of blood sugar levels.

“We found that skeletal muscle cells have machinery to directly sense glucose—in a certain sense it’s like the muscles can taste sugar, too,” said senior study author Jiandie Lin, a faculty member at the LSI, where his lab is located.

This ability of muscles to sense blood glucose is a separate and parallel process that augments the insulin-driven response. Together they work as a rheostat to maintain steady glucose levels in the body, particularly after a meal, according to findings published May 4 in Molecular Cell.

Continuing to develop this in-depth understanding of how the body self-regulates blood sugar at the molecular level could shed new light on obesity and diabetes, as well as point toward new therapeutic targets, said Zhuoxian Meng, the study’s lead author and a research investigator in Lin’s lab.

The researchers were able to examine the contributions of the glucose-sensing pathway in skeletal muscle by silencing a key gene—BAF60C—in cell cultures and in laboratory mice.

“When we did that, the mice lacking BAF60C looked absolutely normal, but after we gave them a high-fat diet to induce obesity, they developed trouble disposing of the additional glucose after a meal,” Lin said. “The well-known insulin mechanism was not sufficient to process the glucose on its own.”

“We found that the molecular pathway that’s engaged by glucose in muscle cells, at least the initial steps, is very similar to what happens in the beta cells in the pancreas,” said Lin, who is also a professor of cell and developmental biology at the U-M Medical School. “This is very interesting because there’s a very important class of diabetes drugs known as sulfonylureas that act by closing a potassium channel and causing the beta cells to secrete more insulin.

“Our research shows that this glucose-sensing pathway in muscle cells likely also plays a role in the drugs’ overall glucose-lowering action. The extent of the pathway’s contribution will need to be studied further.”

Additionally, Lin said, there are two steps within the glucose-sensing pathway that could serve as potential targets for modulation with therapeutic compounds.

The research was supported by grants from the National Institutes of Health and the American Heart Association.