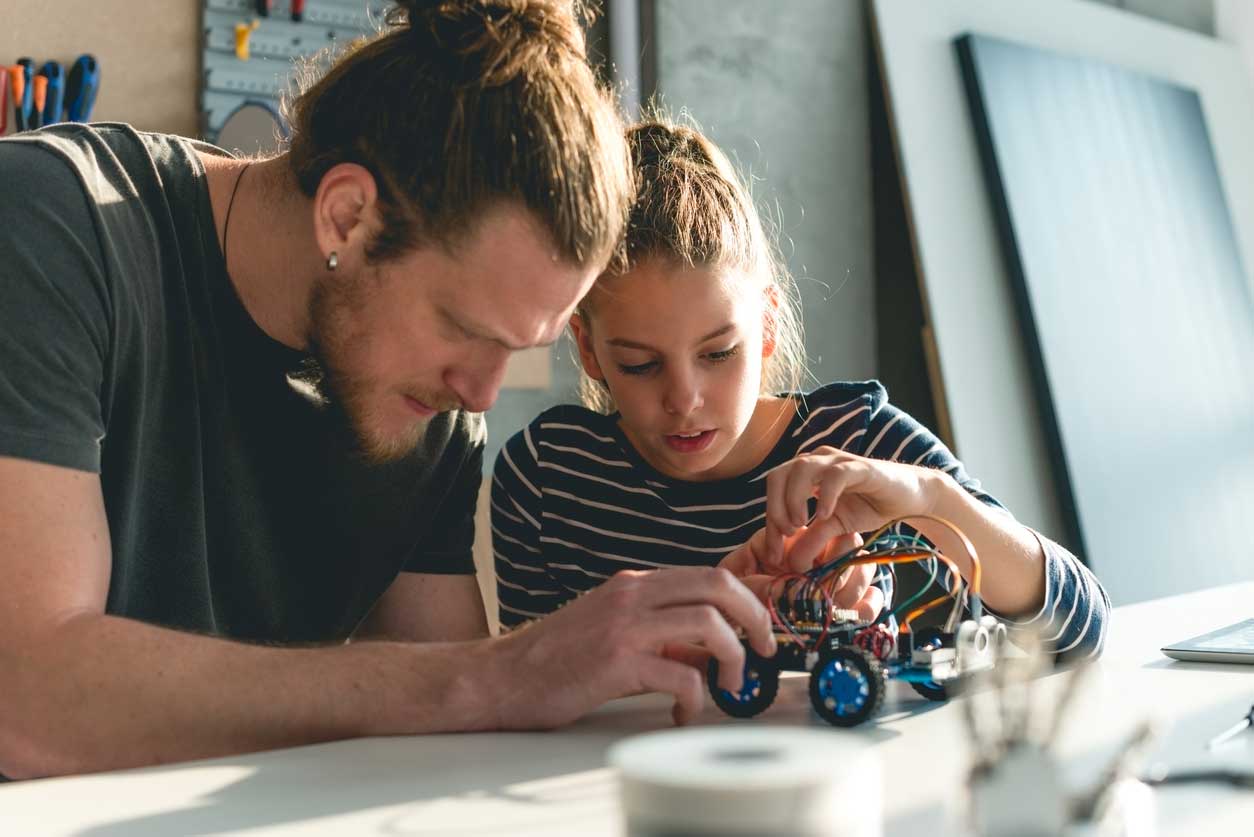 ANN ARBOR—Even when girls perform just as well as boys on standardized math tests, they are half as likely to major in science at college.

However, having one parent or guardian work in the STEM (science, technology, engineering or math) field makes it more likely for girls to perform better in math and to enroll in a “hard sciences” college degree in programs such as engineering, architecture, math and computer science.

This effect is larger for girls than for boys, according to a study by researchers at the University of Michigan and University of Arkansas.

“An important result is that most of the observed direct positive effects, of having a parent in STEM on the probability of enrolling ‘hard science’ college degrees, seem to be concentrated among females. This is in line with other work of mine and points to the potential benefit that role modeling could have on women,” said Gema Zamarro, lead author and an associate professor at Arkansas. “Our results suggest that there are additional barriers—not only math performance or perceived math ability—that could be stopping women from entering STEM.”

Some of these barriers could be gender stereotypes that break down if a girl has a parent in the STEM field, Zamarro said.

The effect of girls’ perception of their math ability and their actual math ability on their choice of college majors could be problematic because STEM-related occupations are one of the few occupational fields experiencing economic growth. Women hold less than 25 percent of STEM jobs, despite holding about 48 percent of all jobs, according to the researchers.

“This finding is not just important to academic research: it’s part of the economy that people are starting to adjust to,” said Frank Stafford, co-author and an economist at the U-M Institute for Social Research.

In 2004, researchers asked children to assess their own perception of their ability to do math and tested their math skills with an exam. Boys scored higher on the exam than girls did, but the difference between the scores was small, according to Stafford.

However, boys tended to rate themselves more highly than girls rated themselves. Sixty-four percent of boys as compared to 50 percent of girls who performed in the higher end of math test scores reported the highest levels of math ability.

Even the boys who tested poorly in math rated themselves as good at math. In the lower end of the math test scores, boys continued to be more optimistic, with 29 percent of them reporting highest levels of ability as compared to 17 percent of girls.

The researchers then followed up with these students in 2014 to track what subjects they majored in at college. When boys reported the highest levels of math abilities, their probability of majoring in a hard sciences field increased by 7 percentage points. When girls reported the same, their probability of a hard sciences major increased by only 2 percentage points.

The researchers saw similar numbers based on the children’s actual performance. Girls who performed in the top fifth percentile were about half as likely to pursue degrees in the hard sciences. When boys performed in the top fifth percentile, it increased their likelihood to major in these subjects by 13 percentage points. For girls, this was about 6 percentage points.

“The largest gap between boys and girls going on to major in science at college is among girls who could easily major in science because they have such a high score on the quantitative test,” Stafford said.

“STEM-related jobs are predicted to continue growing in the future years,” Zamarro said. “Not only it is important for women to have access to these increasing opportunities, but having more women accessing hard science majors could help reduce gender wage gaps in the future.”

The researchers used data from the Child Development Supplement and the Transition to Adulthood projects in the Panel Study of Income Dynamics. The PSID is a 50-year-long survey that has followed the same set of families, now 18,000 individuals, throughout their lives and the lives of their children, collecting data on health, wealth, income and employment, among other measures.

The results are published as a working paper through the University of Arkansas Department of Education Reform.