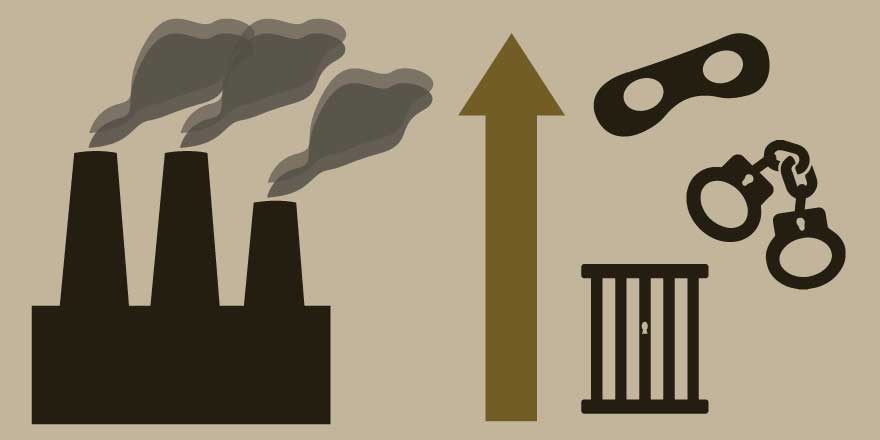 ANN ARBOR—The health consequences of air pollution are well-documented, but a growing body of research indicates it also leads to other societal ills, such as higher crime rates.

University of Michigan researcher Julia Lee and her colleagues explored the underlying causes that link pollution with higher crime rates. A long-term analysis of pollution and crime statistics along with three experiments suggest that anxiety caused by exposure to pollution makes people more prone to cheating and unethical behavior. And that can be a driver behind the higher crime rates in high-pollution areas.

“We wanted to know what explains this connection between air pollution and criminal activity,” said Lee, assistant professor of management and organizations at U-M’s Ross School of Business. “We tested the theory that the stress and anxiety that comes from living with air pollution is a contributing factor. Our results support the contention that air pollution not only corrupts people’s health, but can also contaminate their morality.”

Lee’s co-authors on the study, set to be published in the journal Psychological Science, are Jackson Lu and Adam Galinsky of Columbia University and Francesca Gino of Harvard University.

The researchers first analyzed nine years’ worth of air pollution data from the U.S. Environmental Protection Agency and crime statistics from the FBI. They controlled for factors such as demographic variables, law enforcement levels and poverty rates. The analysis revealed high levels of air pollution in a county predicted higher incidents of crime in nearly every category.

A series of experiments in the United States and India found a connection between pollution, anxiety and unethical behavior. Since it’s unethical to expose people directly to pollution, test subjects were shown pictures of either polluted or unpolluted city scenes. They were then asked to describe or write about how they saw that area and reflect on how they would feel as they walk in that area and breathe the air.

The written descriptions were rated by coders (blind to the purpose of the study) on eight dimensions—distressed, irritable, nervous, scared, enthusiastic, excited, happy and relaxed.

After describing or writing their feelings, the test subjects were asked to complete supposedly unrelated tasks with small financial rewards for correct answers or successful outcomes. In one experiment, subjects were told of a glitch that allowed them to uncover correct answers on a word association test. In another, they were given a dice-roll game and told to self-report the outcome, with a higher score earning them more money.

In each study, subjects who looked at the polluted photo were both significantly more likely to express anxiety and stress in their descriptions, and cheat on the tasks.

“What this tells us is that there’s an ethical cost to air pollution,” Lee said. “It increases anxiety and this leads to unethical behavior. It’s a mechanism from behavioral science that can help explain the connection between air pollution and higher crime rates.”

The research is a response to former President Barack Obama’s call for using behavioral science insights to better serve the public. The studies connect the fields of environmental science, socioecological psychology, criminology, and moral psychology.