Avian secret: The key to agile bird flight is switching quickly between stable and unstable gliding

The finding could have implications for future agile autonomous aerial vehicles

The discovery could lead to the design of more agile aircraft, specifically uncrewed aerial vehicles (UAVs).

The discovery comes as a surprise because birds were believed to have been evolving steadily toward less stable flight, from the long, lumbering dinosaur tails of the earliest birds to the short-tailed agility of modern birds. And yet, from the perspective of flight controllability, it’s not such a shock.

“I have always been amazed at how birds can glide seemingly without effort for hours only to—in a split second—pull off some unique trick, like a dive or other sudden unstable-looking maneuver,” said Christina Harvey, a Ph.D. student in aerospace engineering at U-M and lead author of the study in Nature.

Unstable flight requires constant vigilance to avoid crashing—a control algorithm adjusting flaps on a fighter jet, or a brain signaling muscles for corrective changes. In contrast, stable gliding can passively correct for buffeting by gusts, to an extent.

“We did an evolutionary analysis, led by Vikram Baliga, that showed quite convincingly that there was a strong evolutionary force driving birds not toward stability or maneuverability, but toward the ability to transition between them,” said Doug Altshuler, professor of zoology at UBC, who supervised the biology aspects of the project.

Harvey, who did her master’s studies at UBC under Altshuler, had intended to help with the bird studies. However, when the pandemic made travel inadvisable, her former labmates took data for her. Baliga, a postdoctoral researcher, and Jasmin Wong, a Ph.D. student in zoology, studied 22 bird species at the Beaty Museum of Biodiversity at UBC. The museum collects birds that die at zoos and wildlife sanctuaries and freezes them for future research studies.

“We tracked the motion of the elbow and wrist joints as well as the whole wing shape during wing flexion and extension, and performed dissection on museum specimens,” Wong said.

She and Baliga carefully measured the length, width and mass of each major body part of a bird including the head, torso, wings and tail. Harvey then developed a computer model that read in this information and calculated where each bird’s center of gravity is—sort of a balance point. Leaning on previous work, Harvey estimated the neutral point of each wing shape—the location on the bird where if the center of gravity was placed there, the bird’s position would not be affected by disturbances like gusts. 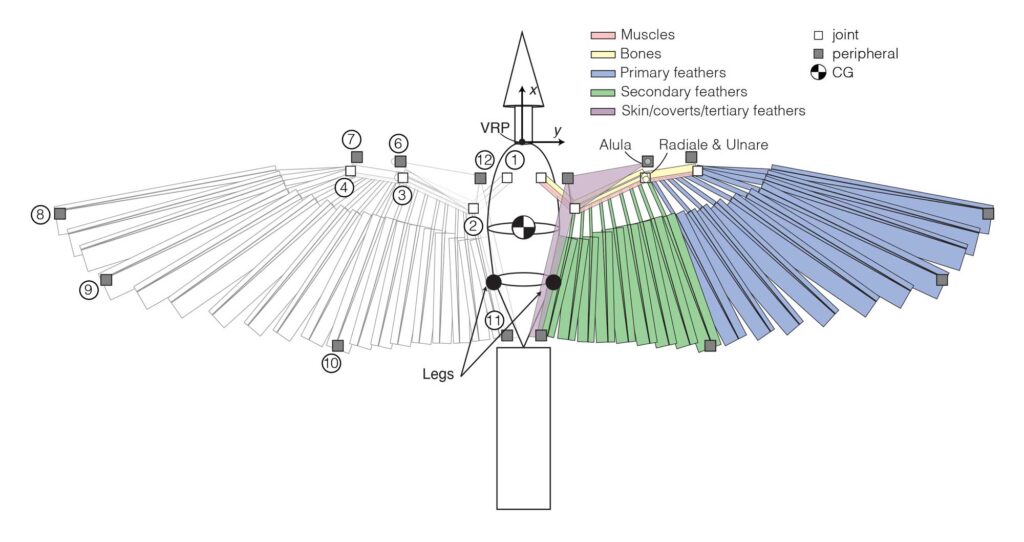 Birds included in the study were modeled as a composite of 232 simple geometric shapes to identify stable and unstable wing configurations. The study showed that rather than evolving toward instability for increased maneuverability, bird agility comes from the ability to switch quickly between stable and unstable gliding. Image credit: Christina Harvey

​​”Combining all these various pieces of information together for each individual species, we created models that gave us an understanding of how a species could change its own stability or instability as it’s flying around,” Baliga said.

It turns out that most modern bird species can manipulate the neutral point to be ahead of or behind the center of gravity by changing the shape of their wings, enabling them to modify their stability on demand.

“Researchers working on morphing aircraft have long quoted bird flight as a motivation. Christina’s unique background and subsequent research has helped put such claims into analytical terms, making a precise science out of avian flight and how it relates to morphing UAVs,” said Daniel Inman, the Harm Buning Collegiate Professor of Aerospace Engineering at U-M, who supervised the engineering side of the project.

Harvey mentioned one such study, in which a bird-inspired drone could transition between stable and unstable gliding by sweeping its wings back. However, those researchers found that controlling the aircraft through that transition was challenging.

“My next step is to get a control expert on board for a new collaboration,” Harvey said. “If we want our UAVs to go there, how much work is that going to be? Is that feasible?”