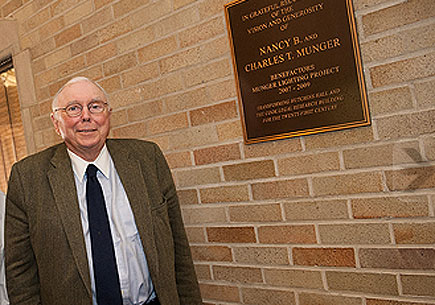 ANN ARBOR—A $110 million gift of securities from investor and philanthropist Charles T. Munger will support his vision for a new state-of-the-art residence at the University of Michigan designed to foster a community where graduate students from multiple disciplines can live and exchange ideas.

The gift includes $10 million for fellowships to help create a residential society that encourages scholarship and interaction from many fields of study. The U-M Board of Regents approved the project and related fellowship program at a meeting today.

The gift is the largest single donation to the university in its 196-year history. The residence will be named in honor of Munger, a U-M alumnus and vice chairman of Berkshire Hathaway Inc.

The proposed building will house more than 600 occupants in a unique high-density residential-academic arrangement.

“This is an innovative and communal approach to graduate school education,” said U-M President Mary Sue Coleman. “Most universities do not take a community-like approach, and this project envisions an approach that makes graduate study less isolated. We see this as a revolutionary concept and an exciting opportunity for us to nurture graduate education within our ecosystem.

“Charlie Munger is passionate about improving graduate student housing, and believes that educating one’s self, in the right setting, is very powerful. We anticipate this new building will have many options for students for meetings, gathering spaces, project spaces and living accommodations that combine the best private and common space.”

Most apartments in this new community of scholars will contain seven individual bed/study rooms, each with a private bath, a very large shared kitchen and common furnished dining and living areas with big windows. Some apartments will have three or six bedrooms.

In an effort to encourage lively discussion and other interaction within and across disciplines, the entire eighth floor will feature many comfortable gathering spaces, a fitness center with a running track, a commissary that carries high-quality basic provisions at low prices, a Fellows’ Room and a panoramic view of the campus and downtown Ann Arbor. Some of the apartments will be used by visiting faculty.

Among those living in the new residence will be a group selected to receive the new fellowships funded by the Munger gift. Chosen from across the university’s 19 schools and colleges, these fellows will enjoy a range of interactions, often convivial, fostering multidisciplinary approaches and competency.

The design Munger helped develop grew out of his experience with funding a large graduate student housing complex at Stanford University, his late wife Nancy’s alma mater. He has worked with U-M to add to Stanford features, including more communal spaces, an improved commissary experience, extensive fitness facilities and a sky-lighted top floor for consumption of food and coffee within a structure that serves as either a screened porch or a solarium, depending on weather.

Munger says that he is “cheerfully cooperating in a limited amount of celebration of his gift,” partly out of duty and partly because he enjoys the attention. “But I particularly want to avoid any perception that I claim large donative merit. After all, I waited until my 90th year before making the gift, then gained friendship and creative joy in working with the university in a very interesting design effort likely to have a good outcome, while I parted with assets I soon won’t need.”

“It is, of course, not intuitively obvious why, with no exact precedent, the University of Michigan should create a residence for graduate students in which almost every occupant has to share an apartment with six others,” Munger said.

Neither Munger nor the university started with this idea. He says the idea gradually came to dominate planning through a confluence of six factors:

The approximately 370,000-square-foot, eight-story building will be located on Central Campus on the north side of East Madison Street between South Division and Thompson streets. The anticipated opening date is fall 2015. Out of the total, $100 million of the gift will go toward the new facility, which will cost about $185 million. The rest will be funded by lease revenue.

The residence will be constructed based on the U.S. Green Building Council’s LEED Silver certification rating system, the recognized standard for measuring building sustainability. In addition to LEED Silver, the building will exceed standard energy efficiency codes by more than 30 percent.

U-M has more than 15,400 graduate and professional students from 113 countries, most of who currently reside in off-campus housing. This addition of about 600 beds of university-owned housing is not expected to cause much change in the long-existing housing pattern.

Munger, who studied mathematics at U-M in the 1940s, has long been a major benefactor to the university. He also has lectured at various schools and colleges on the campus and has advised the university on its investments.

In 2011, he contributed $20 million for renovations to the iconic Lawyers Club housing complex, which was named in his honor. Like this latest gift, Munger’s intent was to help create a facility that would help students be successful, in this case by giving students the amenities they need. In 2007, he gave $3 million to the U-M Law School for lighting and other infrastructure improvements in Hutchins Hall and the William W. Cook Legal Research Building.

In addition to his gifts to Michigan and Stanford, Munger has given millions to various schools and organizations in the Los Angeles area where he resides.

A native of Omaha, Neb., Munger graduated from Harvard Law School in 1948 and eventually founded the Los Angeles law firm of Munger, Tolles & Olson. Olson and many others in the firm are graduates of Michigan’s Law School. Munger stopped practicing law in the 1960s to concentrate on managing investments. After running his own investment firm for many years, he became vice chair of Berkshire Hathaway in 1978.