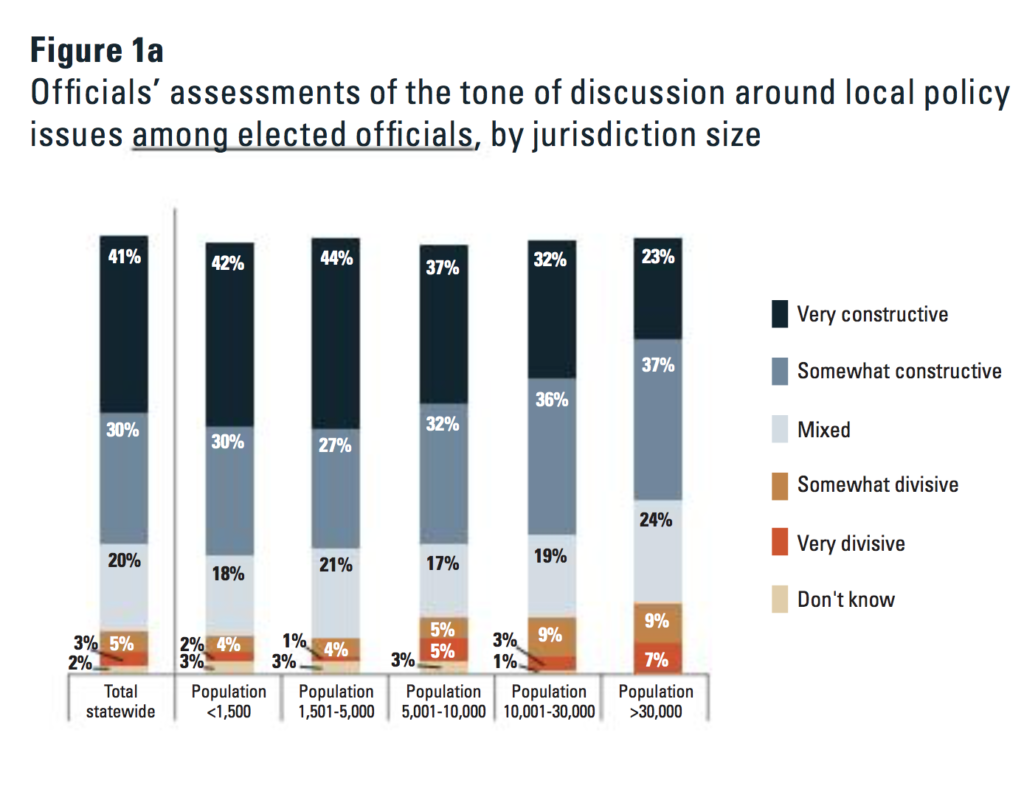 Ann Arbor—Michigan’s local governments report mostly positive civil discourse among their jurisdiction’s elected officials but less so among residents, according to a University of Michigan survey.

“There’s little evidence that the hostile political discourse that plagues national issues is a widespread problem among local elected officials in Michigan,” said Thomas Ivacko, associate director of the Center for Local, State, and Urban Policy at U-M’s Ford School of Public Policy.

However, local leaders are far less optimistic on the tone of discourse on local policy issues among residents in their communities. Only 38 percent of local leaders statewide say discourse among residents is constructive, 11 percent say it is divisive and 39 percent say it is mixed—sometimes constructive and sometime divisive.

“We do see some differences by communities when asked about the tone of discourse on Michigan Public Policy Survey,” said Debra Horner, project manager at CLOSUP. “While most say the overall tone is positive, larger communities are more heterogeneous and tend to have more variations in the civil discourse.”

Similar questions were asked in a previous 2012 survey and the new survey found little change overall, but there are differences among subgroups. Communities in the northern lower Michigan, for example, saw a significant drop (from 80 percent having constructive discussions in 2012 among elected officials to 68 percent in 2018).

The data comes from the Michigan Public Policy Survey, an ongoing survey of Michigan’s 1,856 local governments conducted by U-M’s Center for Local, State, and Urban Policy. The spring 2018 survey received a 74-percent response rate with results from 1,372 jurisdictions.

Local leaders who are in appointed positions, such as city managers, are more likely than local elected officials to believe discourse in their communities is divisive.