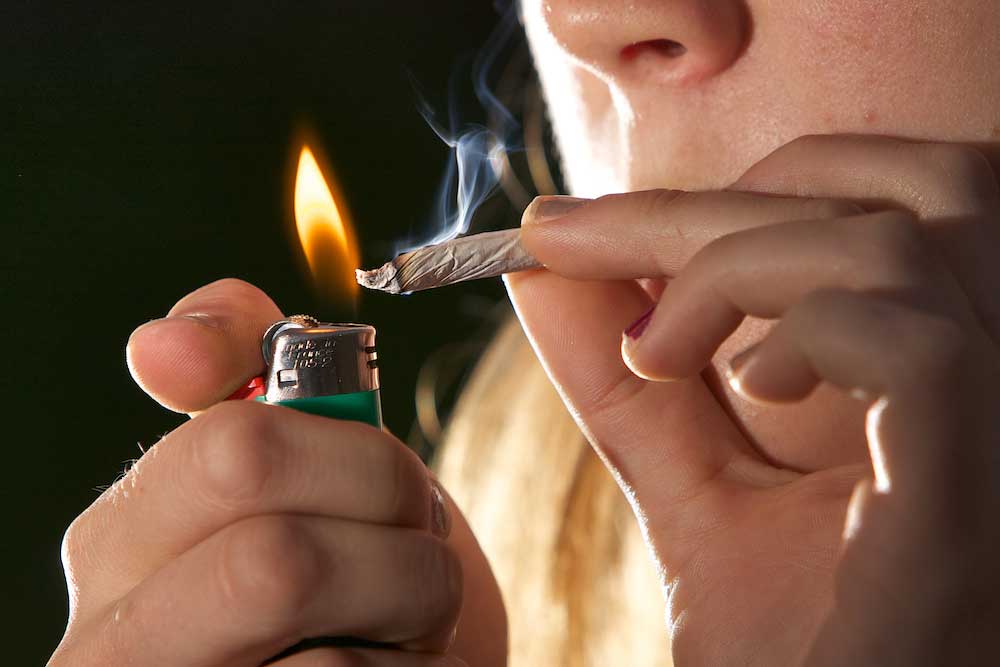 Daily marijuana use increased in 2020 to an all-time high among U.S. college students over the past four decades, according to the University of Michigan’s annual national Monitoring the Future panel study.

In addition, the annual use of hallucinogens—including LSD and psilocybin mushrooms—increased among college students last year, reaching the highest level since 1982. The MTF is conducted by a team of research professors at the University of Michigan and funded by grants from the National Institute on Drug Abuse.

Daily marijuana use—defined as using on 20 or more occasions in the past 30 days—increased to 7.9% in 2020 among 19-to-22-year-old full-time college students, showing a significant increase of 3.3 percentage points over the past five years. Among same-aged young adults not in college, daily use was 13% in 2020. 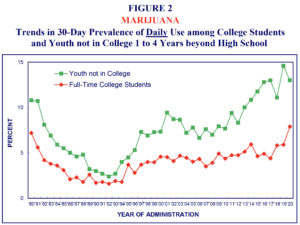 The ongoing MTF study has been tracking college students and same-aged youth not in college every year since 1980, and the 2020 prevalence of daily marijuana use among college students was the highest it has been over the course of the study; for noncollege youth, the 2020 level was below the all-time high of 15% in 2019, representing a nonstatistically significant decline in 2020.

In addition, annual use of marijuana last year was at historic high levels since the early 1980s among college students (44%) and among same-aged youth not in college (43%).

“Daily marijuana use is a clear health risk,” said John Schulenberg, lead investigator of the Monitoring the Future panel study. “The brain is still developing in the early 20s, and as the Surgeon General and others have reported, the scientific evidence indicates that heavy marijuana use can be detrimental to cognitive functioning and mental health.

“As of 2020, almost 1 in 12 college students used marijuana on a daily basis, and we know from our research and that of others that heavy marijuana use is associated with poor academic performance and dropping out of college. For the almost 1 in 7 young adults aged 19-22 not in college who are daily marijuana users, getting a foothold on the roles and responsibilities of adulthood may be all the more difficult. Of course, the landscape of cannabis use is changing, so continued research is needed regarding negative consequences of heavy use.”

There likely are multiple reasons for the continuing increases in marijuana use among young adults, according to Schulenberg and colleagues. One possible reason is the ongoing decline in perceptions of risk of harm from regular marijuana use. In 2020, 21% of those aged 19-22 perceived regular use of marijuana as carrying great risk of harm, the lowest level since 1980 when tracking of this age group began. The highest level was 75% in 1991.

Another main finding is that the use of hallucinogens (including LSD, psilocybin mushrooms and other psychedelic substances) continued to increase, especially among college students. Annual use of any hallucinogen increased 8.6% for college students from 2019 to 2020, the highest it has been since 1982. Among same-aged young adults not in college, annual use was 9.8% in 2020, the highest it has been for two decades. 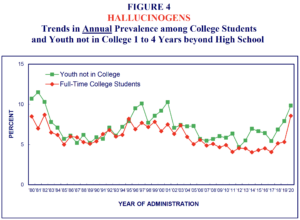 “This continued increase in the use of hallucinogens corresponds with the decrease in the perception that hallucinogens are harmful,” Schulenberg said. “For example, the perception that experimental use of LSD carries great harm was at only 28% in 2020 among 19-to-22-year-olds. This is an all-time low over the past four decades and far below the highest level of 50% in 1989.”

A third main finding is that college drinking declined in 2020, perhaps due to the COVID-19 pandemic. Among college students, both 30-day use and 30-day drunkenness decreased significantly between 2019 and 2020 to 56% and 28%, respectively. Importantly, for both of these measures, the trends between 2015 and 2019 were fairly level, suggesting that the significant drop between 2019 and 2020 reflects possible pandemic effects due to reduced social time with college friends.

Among noncollege youth, both of these measures showed fairly level trends between 2015 and 2020, with no drop in 2020 (when prevalence was 49% and 22%, respectively). In addition, college student binge drinking (defined as five or more drinks in a row at least once in the past two weeks) declined a significant 7.8 percentage points between 2019 and 2020 to 24%, an all-time low in the past four decades; it was also 24% among same-aged youth not in college in 2020. 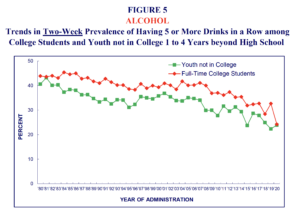 These findings come from the annual national Monitoring the Future panel study, which has been tracking substance use among U.S. college students and same-aged youth not in college since 1980. Results are based on data from college students one to four years beyond high school graduation who are enrolled full-time in a two- or four-year college in March of the given year, and from same-aged high school graduates not enrolled full time in college.

The new findings reported are from surveys conducted between March 30, 2020, just after the national shutdown due to the COVID-19 pandemic, through Nov. 30, 2020. Additional information about the findings is available from the National Institute on Drug Abuse.

This ongoing annual study also examined trends in the use of other substances including alcohol and tobacco. In 2020, use of most substances remained steady or declined modestly. Additional study results include: