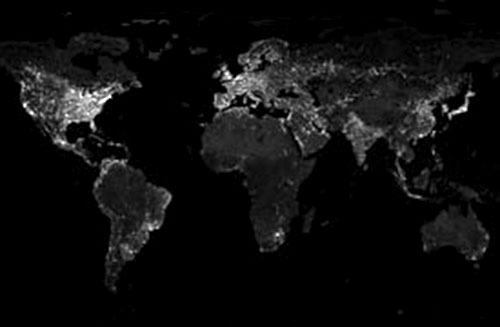 Nighttime lights around the world.ANN ARBOR—Across the developing world, people living in democratic countries are more likely to have electricity than those in autocracies, a University of Michigan researcher says.

In a sweeping new study of electricity access of nearly 150 countries, Brian Min, U-M assistant professor of political science, says that competitive elections lead to higher levels of electricity provision to a country’s citizens, especially in rural areas with high rates of poverty.

“Democratic countries like India, Turkey and Brazil provide electricity to 10 percent more of their citizens than countries whose leaders do not face political competition,” said Min, who discusses the issue in his new book, “Power and the Vote: Elections and Electricity in the Developing World.”

The relationship holds even after controlling for differences in wealth, demographics, and geographic factors. 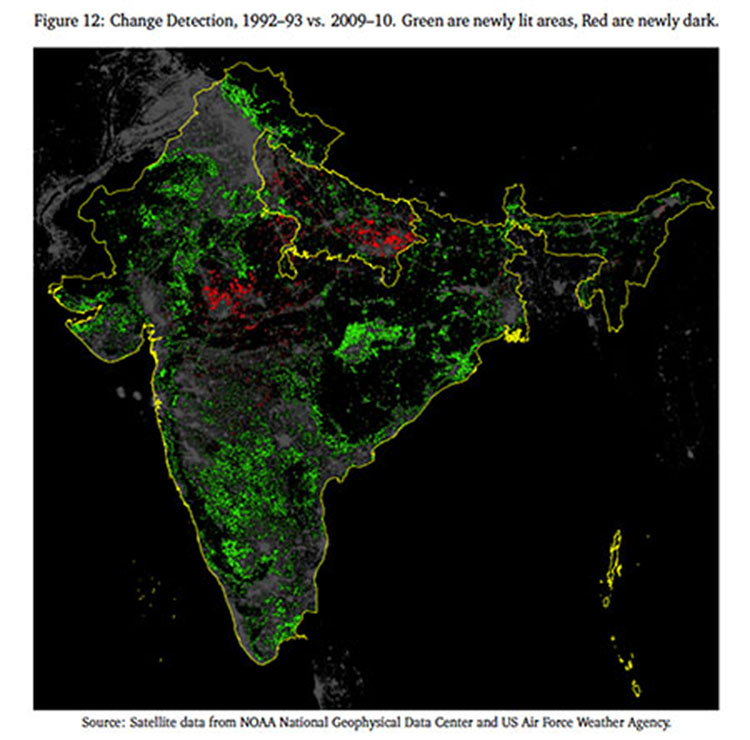 Nighttime lights over India.If democracies are better at providing public services, what explains the apparent success of autocratic countries like China in expanding access to electricity? According to official estimates, almost all Chinese villages are now electrified. Meanwhile, in the world’s largest democracy of India, well over a third of Indian villagers have no electricity.

According to Min, these official rates depend on self-reported government data, and states use inconsistent definitions and shaky estimation strategies to come up with their figures. The satellite-based methodology of nighttime lights tells a different story, Min says.

The share of the population living in lit areas is surprisingly similar for China and India, particularly in the poorest parts of these countries, Min says. In fact, a quarter of China’s population live in areas that emit no stable light output at night, with most concentrated in the poorer central provinces of Sichuan, Yunnan and Guizhou.

Min argues that democratic leaders prioritize the delivery of public services like electricity for several reasons. Electricity provision is an efficient way to win political support because it affects many voters and is valued by the masses. In addition, efforts to expand the power grid provide many opportunities for politicians to win votes by influencing where, when, and how projects are implemented.

“Targeting electricity is highest in election periods when voter attention is highest and where the political opportunity and capacity for change is highest,” he said.

Tracking state elections in India’s northern state of Uttar Pradesh over the last two decades, Min shows that more villages benefited from stable electricity supply in election years compared to years in which there were no elections.

Min notes that the relationship between electricity access and politics has important implications in the debate about climate change.

He says that as the world has grown richer, energy use has accelerated, not slowed down. Since 1990, global electricity consumption has more than doubled, while average global incomes have grown by only about 50 percent. Meanwhile, electricity generation results in more greenhouse gas emissions than any other human activity.

“As economies grow, so will the thirst for energy,” Min said. “The ways in which that thirst is quenched and balanced with the threats of climate change will be shaped by political institutions in ways that cannot be ignored.”