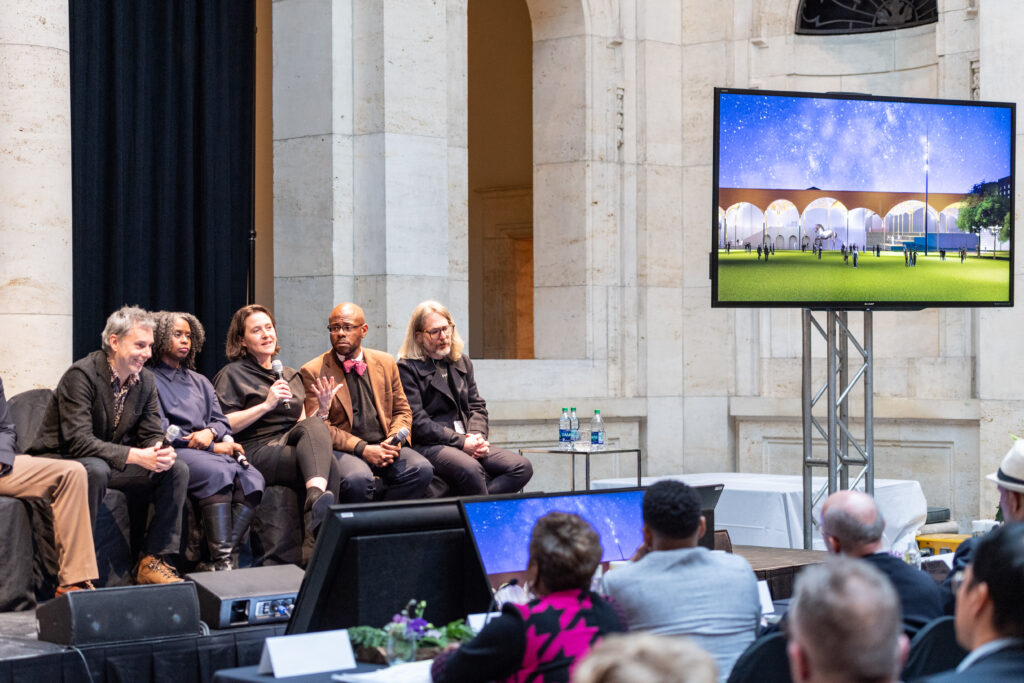 Anya Sirota, associate professor of architecture and principal of design duo Akoaki in Detroit, talks about the proposed canopy that would rise high and flexible as a DIA addition. It would be used to exhibit new works, large-scale exhibits and events. Scott Soderberg, Michigan Photography.

ANN ARBOR—When Craig Wilkins looked out into the audience during his team’s presentation at the Detroit Institute of Arts this week, he was happy to see many of his University of Michigan students in the crowd. 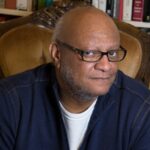 “It’s exciting to me that they’re getting a chance to see how these conversations really happen, because it is the same kind of thing that we talk about in class all of the time,” said Wilkins, a lecturer at U-M’s Taubman College of Architecture and Urban Planning.

Three teams of urban and landscape design professionals—including two with U-M faculty from Taubman College and Stamps School of Art & Design—presented their visions of how to connect Detroit’s leading cultural venues into one destination in Midtown Detroit. The teams incorporated key community needs such as space for local artists to explore and exhibit work. The proposals will be on exhibit at the DIA through April 1.

Wilkins and Joel Schmidt, principal of D MET Design and lecturer at Taubman College, are part of the team Ten x Ten, based in Minneapolis. U-M faculty Anya Sirota, associate professor of architecture and principal of design duo Akoaki; Harley Etienne, assistant professor of urban and regional planning; and John Marshall, associate professor of art and design and co-founder of design studio rootoftwo, are on the Agence Ter team, based in Paris. The third team, Mikyoung Kim Design of Boston, includes Kemba Braynon, a U-M alum and an associate in the Detroit office of Quinn Evans Architects.

Ten x Ten presented its idea to create a park-like area around the dozen cultural institutions that would be called d.tour: Detroit Starts Here.

“This is the epitome of what I do—use architecture to enhance people, community and engagement. One of the things that I focus on in the classes that I teach at U-M is that architecture is a process,” Wilkins said. “Architects don’t do things alone—usually the best outcomes happen when we design with people, not for people, and that’s how my team approached this project for the DIA and surrounding cultural institutions.”

The international design competition was launched last year by the DIA and Midtown Detroit Inc. to unite 12 cultural and educational institutions, creating a connected cultural district and a town square for the surrounding neighborhoods.

The Agence Ter team proposed a number of public spaces including a canopy, or a series of domes, that would be tall and flexible to create a large-scale exhibit and events space as an addition to the DIA. It would be enclosed in glass “like a winter garden, like a crystal palace,” Sirota said. “Detroit deserves a space for its cultural expression.”

Sirota also showed several schematics that envision what the space might look like in each season as the elements of landscape and architecture meld together to create a shared stage for all the institutions.

Teams also dealt with the nuts and bolts of street closures and parking. Agence Ter proposed narrowing Woodward Avenue by two lanes and closing secondary roads Farnsworth, Putnam, Kirby and John R, along with building a four-story parking structure that would bring more than 1,000 spaces to the district.

“I wouldn’t be worth my salt as a planner if I wasn’t concerned about how people got in and out of the site,” said Etienne, adding that people might panic about closing roads such as John R, except that Brush Street would go from one-way to two-way traffic to allow access to the new parking structure.

A jury that includes Jonathan Massey, the dean of Taubman College, will weigh in on the winner to be announced this spring. 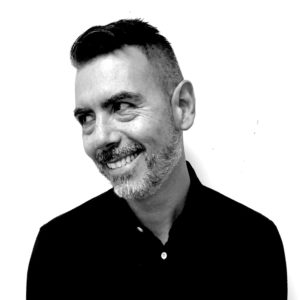 “Connecting the city’s artists and scholars with some of the world’s best landscape and architecture firms, the competition reimagines Midtown as a civic commons at once monumental and accessible, cosmopolitan and distinctly Detroit,” Massey said. “It shows how a participatory and multilateral design process can forge a consensus for change among institutions, funders and neighbors.”

For Wilkins, the experience has been exciting, and the team’s design focused on making the space democratic.

“We tried to imagine this as a place where people can engage each other accidentally,” he said. “We also really wanted to highlight that these institutions are our culture, our heritage—and we want the surrounding landscape to honor that, to drive conversation and connection. A lot of people don’t consider how the built world around us can actually make us better people.”