For some, it matters who’s donating an organ, blood 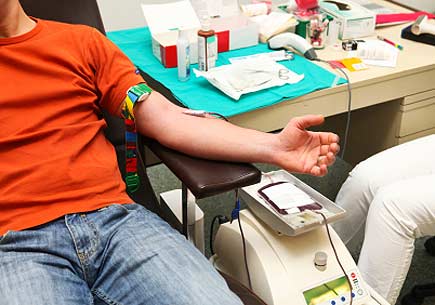 ANN ARBOR—Some people feel so “creeped out” that they would decline an organ or blood that came from a murderer or thief, according to a new University of Michigan study.

In addition, they express concern that their personality or behavior may change to become more like that of the donor, as a result of the donation.

Recipients prefer to get an organ or DNA transplant or blood transfusion from a donor whose personality or behavior matches theirs, said Meredith Meyer, the study’s lead author and a research fellow in psychology. People think that people’s behaviors and personalities are partly due to something hidden deep inside their blood or bodily organs, she said.

“Since blood transfusions are so common and relatively straightforward, we had expected people might think that they have very little effect,” Meyer said.

“This suggests an interesting intuitive belief—that behaviors and personalities are inherent, unchanging aspects of who they are,” said study co-author Susan Gelman, the Heinz Werner Collegiate Professor of Psychology.

The study’s participants viewed a list of possible human donors and judged whether they wanted someone who shared similar traits, such as age, gender, sexual orientation and background. Possible donors also included two animals: a pig or a chimpanzee. For human donors described as having the same gender, the characteristics could be positive (e.g., high IQ, talented artist, kind person or philanthropist) or negative (e.g., low IQ, thief, gambler or murderer).

Respondents ranked how much they liked the idea of each being a donor, as well as assessed their beliefs that the transplant would cause the recipient’s personality or behavior to become similar to the donor’s. Questions also involved feeling “creeped out” or “contaminated” by the transplant.

The findings indicate it was more important for people to have a donor similar to themselves than the positive or negative qualities that individual possesses. Transplants from animals were judged to be particularly distasteful.

“People dislike the prospect of any change in their essence—positive or negative—and so any salient difference between the donor and recipient leads to increased resistance to the transplant (despite the fact) there is no scientific model to account for why transplants might lead to transference of features,” Meyer said.

The belief that a recipient might take on some of the donor’s characteristics is interesting when it comes to the possibility of transplanting organs from other animals to humans, said study co-author Sarah-Jane Leslie, assistant professor of philosophy at Princeton University.

“From the medical point of view, this is beginning to look like a promising way of addressing donor shortages,” Leslie said, “But these results indicate that potential recipients could struggle with the belief that accepting such a donation will profoundly change who they are.”

The study compared transplant beliefs—heart, pacemaker and skin grafts—with participants from both the United States and India, where some of its subcultures express strong contamination beliefs. Researchers thought this might influence Indians’ beliefs about transplants.

Respondents from both countries did not like transplants from animals or donors with negative traits, but differed in how they viewed donor-to-recipient transfers—Indians felt stronger than Americans that transplants would affect their behavior.

The findings appear in the journal Cognitive Science. The study’s other author is Sarah Stilwill of U-M.