Getting the lead out: Data science and Flint pipes

FLINT, Mich.—Copper or lead? It’s the burning question in Flint as the painstaking process to find, remove and replace lead pipes continues this summer.

University of Michigan students and professors, working with the city, helped answer that question with data science that predicts which homes have lead pipes. They estimated that three out of four houses in Flint have lead in their service lines, which are the pipes connecting each home to the city water system.

“Knowing which homes to inspect can reduce the costs of replacing their pipes with safer ones and more efficiently get the lead out of Flint,” said Eric Schwartz, U-M assistant professor of marketing at the Ross School of Business. “The approach could serve as a model for other cities to follow.”

Speeding a solution can save money and deliver safe drinking water to residents. While the state has deemed the water safe to drink, doubts remain about whether a home has lead pipes buried underground.

“The risk still varies from house to house,” Schwartz said.

Lead leached from the pipes when the water was not properly treated for more than two years after a switch to the Flint River in April 2014.

The researchers estimate that their method of inspecting, identifying and targeting pipes for replacement could save as much as $10 million—a 10 percent savings and roughly equivalent to replacing the lead pipes in an additional 2,000 homes. Much of this savings is in avoiding unnecessary excavations, since each unneeded dig can still cost the city thousands of dollars.

The study was directed by Schwartz and Jacob Abernethy, now an assistant professor at the Georgia Institute of Technology. Other co-authors were U-M students at the time, Alex Chojnacki and Arya Farahi, and Jared Webb, a visiting student from Brigham Young University.

The city initially provided U-M researchers with a dataset describing each of more than 50,000 parcels in the city. And using hand-drawn maps stored by the water department, researchers created an extensive database that allowed Schwartz and his team to predict the probability that a house had lead or unsafe pipes. 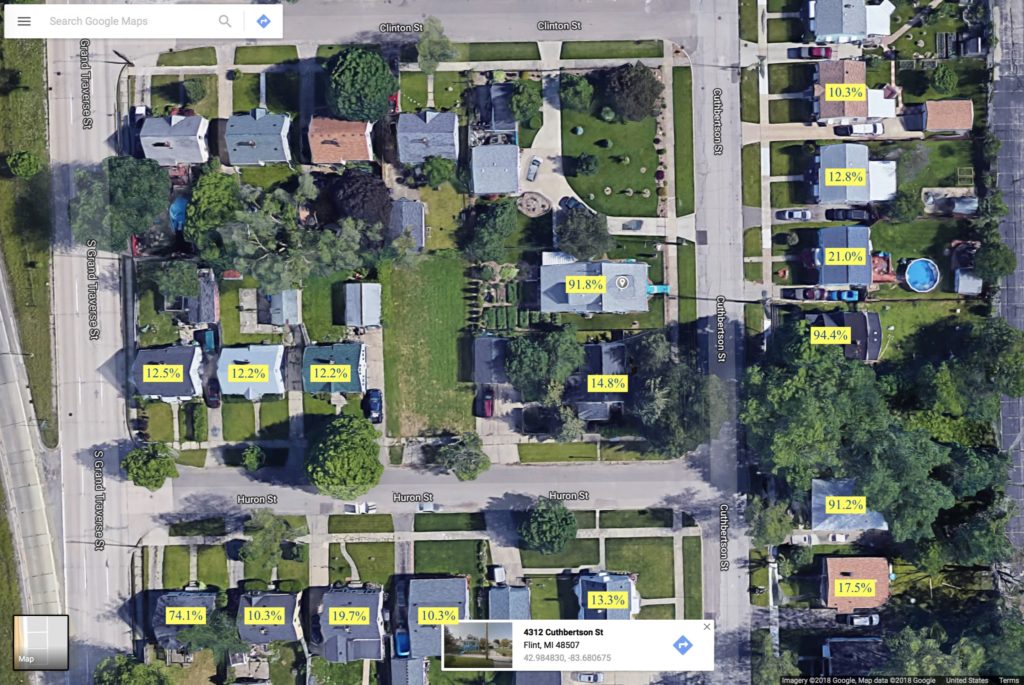 Map of the intersection of Huron and Cuthbertson streets showing the probability (percent) that a home has lead or copper pipes. Image courtesy: Eric Schwartz

Schwartz and colleagues coordinated with Captricity, a data technology company, to further the efforts to digitize Flint’s water department’s 100,000 historical public work records on mostly handwritten index cards, dating back to 1910. Captricity donated the use of its artificial intelligence software for handwriting recognition, transforming the scanned cards into usable data. That data was provided to the city’s team managing the pipe replacement project, called the Flint Action and Sustainability Team (FAST). 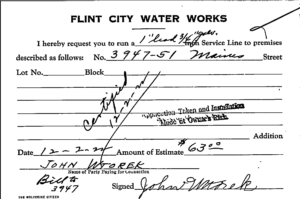 An example of one of more than 100,000 index cards found in the Flint water department’s basement that offered researchers only a fraction of the information needed to understand where the city’s lead pipelines lurked. Image courtesy: Eric Schwartz

The city’s FAST Start Team, which has now received over $100 million from the federal and state governments, is making progress in removing lead service lines. But as many as 75 percent of the city’s homes are still exposed.

“Professor Schwartz and his team’s assistance made a huge difference,” said retired Brig. Gen. Michael McDaniel, who coordinated the FAST program in Flint in 2016-17. “We hope the city of Flint continues to receive the funding needed to replace all of its lead-tainted service lines, which I think could happen over the next three years.”

The FAST Start Team also began using hydrovac trucks to inspect underground pipes before sending the costlier digging several feet to the pipe location. The hydrovac can dig a precise hole very quickly and observe the pipe material for around $250 per inspection.

The U-M researchers’ methods then focused on targeting inspection efforts to most efficiently find and replace as many homes’ lead pipes. The team also built a data collection app for the city and its contractors to keep track of their work and those funds.

“The biggest pubic investment resulting from Flint’s water crisis is the large-scale removal of lead and other dangerous pipe materials from residents’ water service lines—the pipes connecting most pipes to their water system,” Schwartz said. 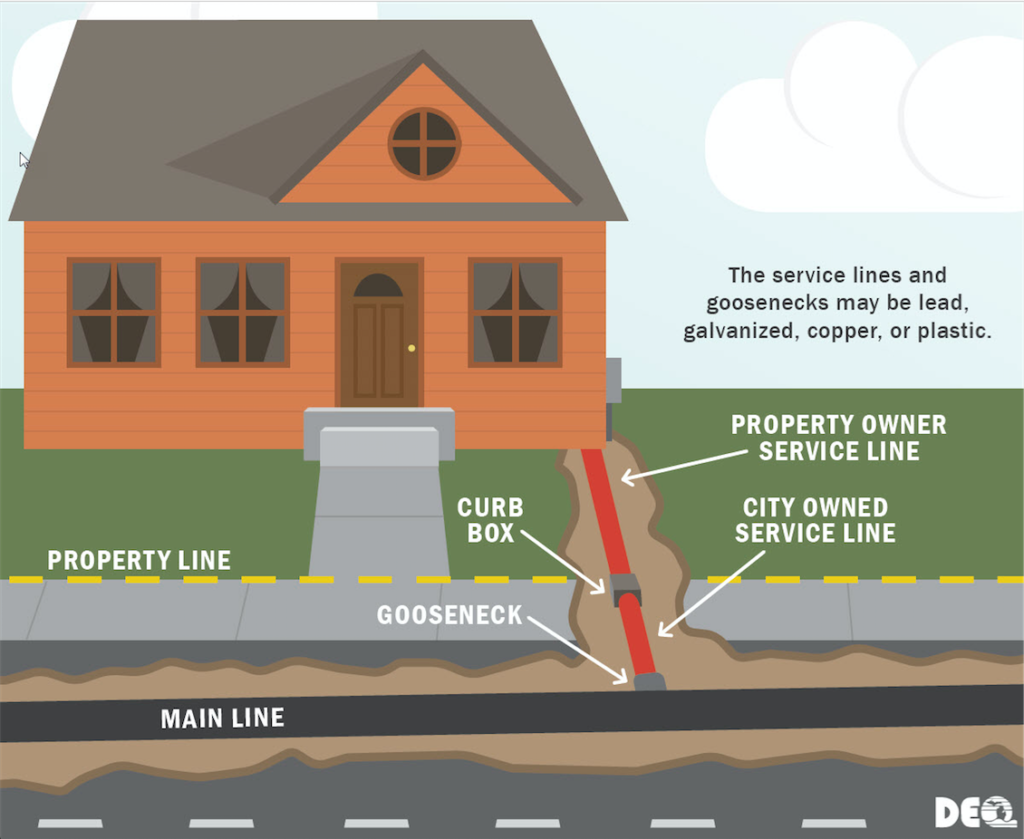 Across the country, more than 6 million homes connect to their municipal water systems with lead service pipes, putting the industry’s estimated cost to replace them near $275 billion. The replacement costs would be lower if cities knew which homes have the lead lines, but even determining the material composition of a single buried pipe is expensive and can cause unneeded digs.

The methods could apply to any municipal or private utility that faces the same budget constraints in attempting to remediate a similar public health issue.

Schwartz and Abernethy began their work in Flint in 2016, following a project initiated and funded by Google, to support the development of a mobile app allowing Flint residents to determine their homes’ risk levels and other useful information.

The study will be presented at the 24th SIGKDD Conference on Knowledge Discovery and Data Mining Aug. 19-23 in London, the premier machine learning and data science conference.