RIO DE JANEIRO—Maria Lima lovingly strokes her baby’s chest as the infant sleeps in an incubator. Her child was born premature and won’t be leaving the hospital soon.

“It’s very sad. You have to leave your child. You can’t take her home,” Lima said. “You get home and you feel empty inside.”

Lima has another worry. She’s unable to produce enough milk for the baby, who is too weak to feed. But this isn’t a big problem for Lima because Brazil has a world-leading system that collects donated breast milk from mothers and provides it to babies in need.

“She’s getting better. She’s breathing by herself,” said Lima, who didn’t want to feed her baby formula.

Last year, breast milk donated by almost 163,000 women fed 183,000 babies in Brazil. The system of collection centers, or “milk banks,” has been so successful that it has become a model for countries across Latin America, Africa and Europe.

Brazil’s success has long interested Lisa Hammer, a pediatrician at the University of Michigan Health System. She recently led a group of U-M physicians and other health professionals to Rio de Janeiro to explore the possibility of adopting parts of the Brazilian model in the U.S.

The trip was funded by the U-M Brazil Initiative at the Center for Latin American and Caribbean Studies.

“We have a lot to learn from them,” Hammer said. “What impresses me the most is Brazil’s focus on maintaining an extremely high standard of quality, but they also focus on cost savings.”

There are 213 milk banks across Brazil, while the U.S. only has 15. Michigan has only one, and it’s in Kalamazoo.

The push to improve Brazil’s milk banks began 30 years ago when chemist João Aprígio Guerra de Almeida visited a center and was appalled by what he saw: a system that mostly relied on impoverished mothers selling their milk.

Selling milk was eventually banned, thanks to a campaign by Almeida. He also developed ways to cut costs. Instead of storing milk in expensive beaker tubes, they used sterilized mayonnaise and instant coffee jars. To pasteurize the milk, they used Brazilian-made equipment from food-testing laboratories instead of pasteurizing machines that cost 16 times more.

“I’m really proud to say that we are investing in children and helping to save 300,000 lives of newborns per year in Brazil,” said Almeida, director of the Brazilian Milk Bank Network.

Still, there’s much more work to be done. About 45 percent of the children who need the milk don’t have access to it, Almeida said. “So we remain committed that this milk bank network keeps expanding to reach this deficit.”

Building the right infrastructure for milk banks was important. But equally vital was creating the public awareness and support for the program.

“I think the way the system is set up in Brazil is really great,” said Ann Sadovnikova, a graduate student in the School of Public Health who visited more than 20 milk banks last summer. She is doing a comparative study of systems in Brazil, Europe and the U.S..

Sadovnikova said the milk banks are set up in a hospital, so women who go to their prenatal check-ups also attend breastfeeding classes. 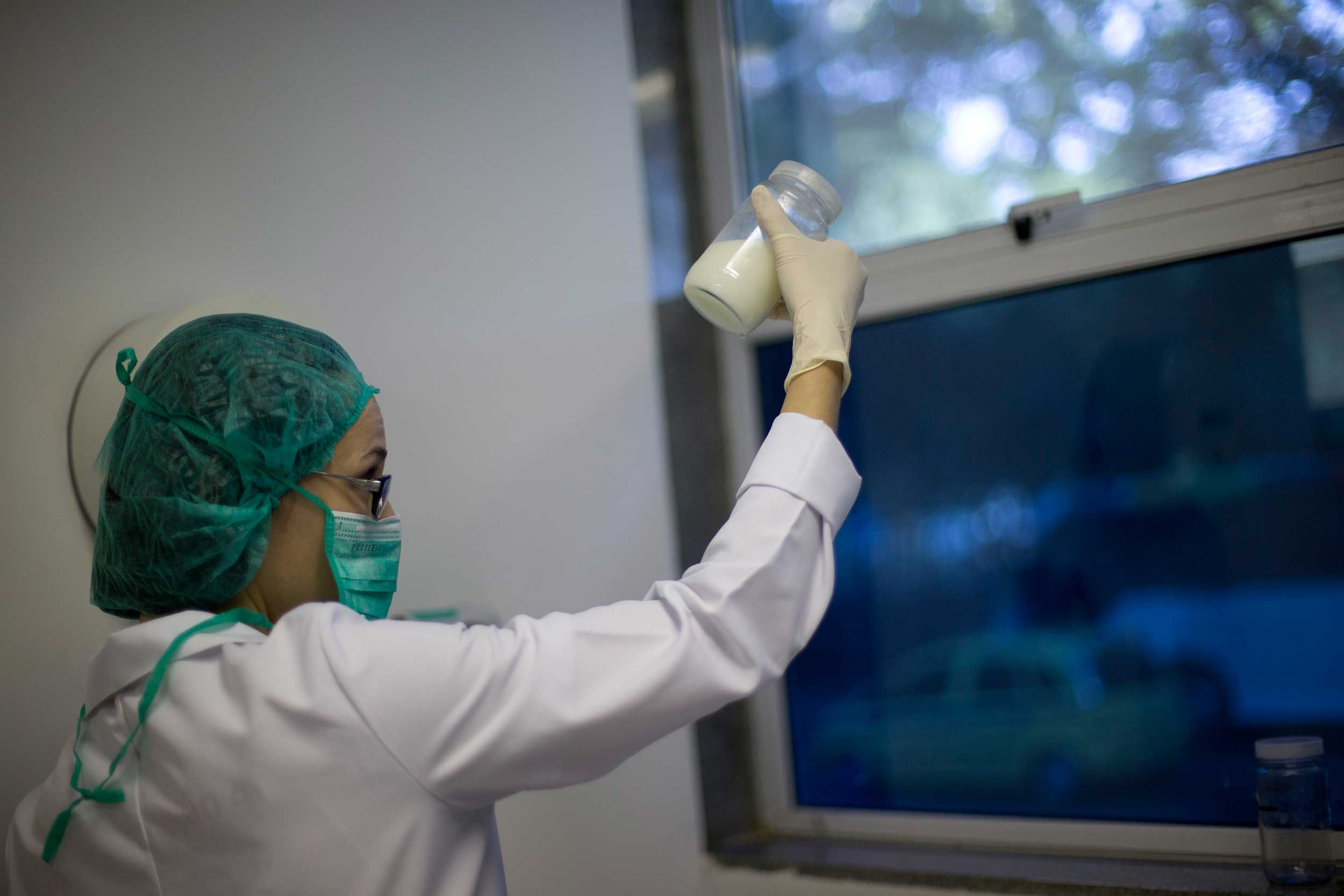 A Brazilian milk bank worker examines a donation of breast milk. (AP Photo/Silvia Izquierdo)Feeding an infant mother’s milk is extremely important, said Kate Stanley, a neonatologist who was part of the U-M group that traveled to Brazil.

“We know that human milk has multiple benefits, in terms of decreasing infections and gastrointestinal problems. It improves overall growth, and there have been some studies that show it improves IQ,” Stanley said.

“One of the difficulties we have is that not everyone can afford human milk. Brazil’s model is that they provide it to everyone who needs it, which is something we seriously need to take a look at. What makes babies whose parents can afford it more important?” the physician added.

One regular milk donor is Jacira da Silva, who recently gave birth to a healthy boy. She got to leave the hospital on time, but Jacira hasn’t forgotten about the moms and babies who weren’t so fortunate. Every week, she returns to the hospital to donate her milk.

“I decided to be a donor to help kids in need,” she said. “I know that so many sick babies can benefit from this ‘healthy food.’ I’m so grateful to have my vigorous baby with me and really wanted to help other families in some way. The more you donate the more milk you produce for your baby.”

Another donor, Maria Teresa Aragao, said that from the moment she knew she was pregnant, she was sure that she would try to donate her milk. “I was happy knowing that someone was receiving my milk and I was helping them, and I could provide it for free,” said Aragao, who donated milk once a week.

Hammer said there are many parts of the Brazilian model that could work in the U.S. but other things would have to adapt to U.S. standards.

“One thing that Brazil’s network does really well is integrate education, support and milk processing,” she said. “I would like to take that integrated approach to the U.S.”