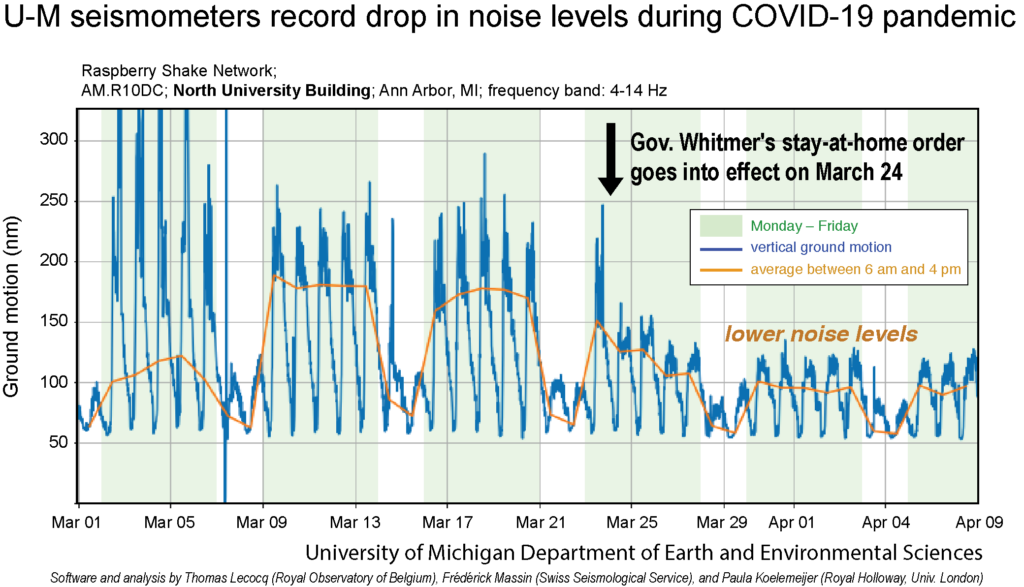 ANN ARBOR—A vibration-sensing seismometer originally installed in Michigan Stadium to measure ground shaking from fans during home football games has been repurposed to capture the quiet on campus and on surrounding city streets during the COVID-19 pandemic.

Professors Jeroen Ritsema and Ben van der Pluijm of the University of Michigan Department of Earth and Environmental Sciences are using a portable digital seismometer in the football stadium, and one on U-M’s Central Campus, to study the reduction in ground-motion noise following the cancellation of in-person U-M classes March 11 and the Michigan governor’s March 23 stay-at-home executive order, which took effect the following day.

A 30% reduction in average weekly noise levels was detected by the Michigan Stadium seismometer, which sits at the corner of two normally busy Ann Arbor streets, South Main Street and Stadium Boulevard, van der Pluijm said. A 50% reduction was recorded in the 1100 North University Building on the U-M Central Campus, he said.

“It is now easier to hear Earth’s voice above the anthropogenic noise,” said Ritsema, a professor of geophysics. “We might learn something about how anthropogenic noise affects the quality of our seismic recordings, and it may help us identify quieter locales for routine earthquake monitoring.”

The U-M study is part of an effort by seismologists worldwide to measure how seismic noise levels have dropped since COVID-19 lockdowns and stay-at-home orders have been issued. Designed to record ground motions during earthquakes, seismometers can also measure vibrations from a rowdy crowd of 110,000-plus at Michigan Stadium or from cars and trucks rumbling down busy city streets. 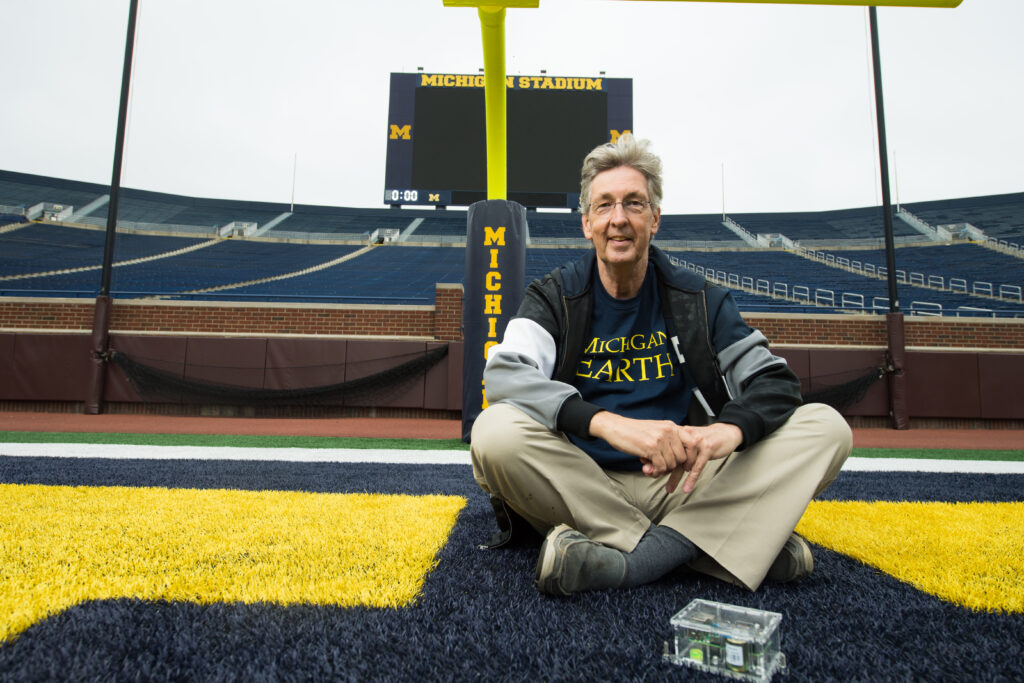 U-M geologist Ben van der Pluijm in Michigan Stadium in 2018 with a portable digital seismometer like the one used to measure crowd response during University of Michigan home football games. The stadium seismometer, and another one like it on the U-M Central Campus, are now being used to study the drop in ground-vibration noise during the COVID-19 pandemic. Image credit: Austin Thomason, Michigan Photography

“This coronavirus-driven stay-home order creates a unique situation in city noise conditions, similar to the reduction in atmospheric contrails due to less flying,” said van der Pluijm, an expert on the societal impacts of geological hazards. “This special situation has piqued the interest of researchers around the world.”

When the first reports from Belgian seismologist Thomas Lecocq surfaced on Twitter and in news stories last month, researchers around the world began to check their own instruments, using software written by Lecocq that isolates city noise frequencies, as opposed to broader earthquake frequencies.

A British colleague of Ritsema’s, Paula Koelemeijer, used the software to analyze data from several U-M seismometers. Van der Pluijm installed the Michigan Stadium instrument in 2018 as part of the Michigan Shake project, which measures fan noise during games. Other seismometers were later added in the 1100 North University Building and at U-M’s Camp Davis field station in Wyoming.

“Records from our seismometer on the 4th floor of the North University Building on Central Campus show a dramatic decrease in shaking noise once campus closures were implemented,” van der Pluijm said. “Data from the Michigan Stadium seismometer is less pronounced, but a drop in activity is obvious from the daytime average noise compared to the middle of March.”

Van der Pluijm has used Michigan Shake findings in his introductory geology class to demonstrate that all sorts of events, both natural and human-caused, shake Earth to varying degrees and produce vibrations that a seismometer can detect and record.

“Earthquakes, volcanic eruptions, nuclear tests, mining explosions, hurricanes making landfall, building and bridge collapses, a dump truck rumbling down the road, a touchdown by the home team at Michigan Stadium. All generate vibrations that are transmitted through the Earth and recorded by seismometers,” van der Pluijm said.