That’s very consistent in the Down syndrome population, that the average age of onset of walking is somewhere between 24 months and 28 months roughly.

We hadn’t heard of treadmill intervention before. It was all new to us. So we visited the University of Michigan’s Kinesiology epartment to understand exactly what it was that they did to help people with Down syndrome walk earlier.

It’s definitely successful and I think it also gives parents something they can be invested in and do with their child, feel like they are helping them and absolutely it’s beneficial.

We’re just lucky that the University of Michigan is nearby and doing such tremendous research to help people with disabilities. I think that our son was blessed to be a participant in the program and he is the recipient of such tremendous work and it has impacted his life.

ANN ARBOR—From Hartland to Sturgis, Grand Rapids to Gaylord, children born with Down syndrome are walking three to six months earlier, thanks to University of Michigan research that discovered just minutes a day on a tot-sized treadmill leads to the crucial life milestone.

Typically walking for children with Down syndrome is delayed until 24 to 28 months of age, roughly a year later than children without the syndrome.

But researchers Dale Ulrich and Beverly Ulrich and a team from U-M’s School of Kinesiology discovered that several minutes a day on a custom, miniature treadmills would speed up the time to walking by three to five months.

That nearly 20-year-old discovery has touched hundreds of children across Michigan and outside the state. It’s brought miniature treadmills into those children’s homes—or led them to specially designed treadmills available in the community.

Ulrich started his treadmills research with funding from the National Institute for Disability and Rehabilitation Research and the March of Dimes. His findings and success stories were published in numerous children’s health and medical journals through the years. As word spread, parents began contacting Ulrich. 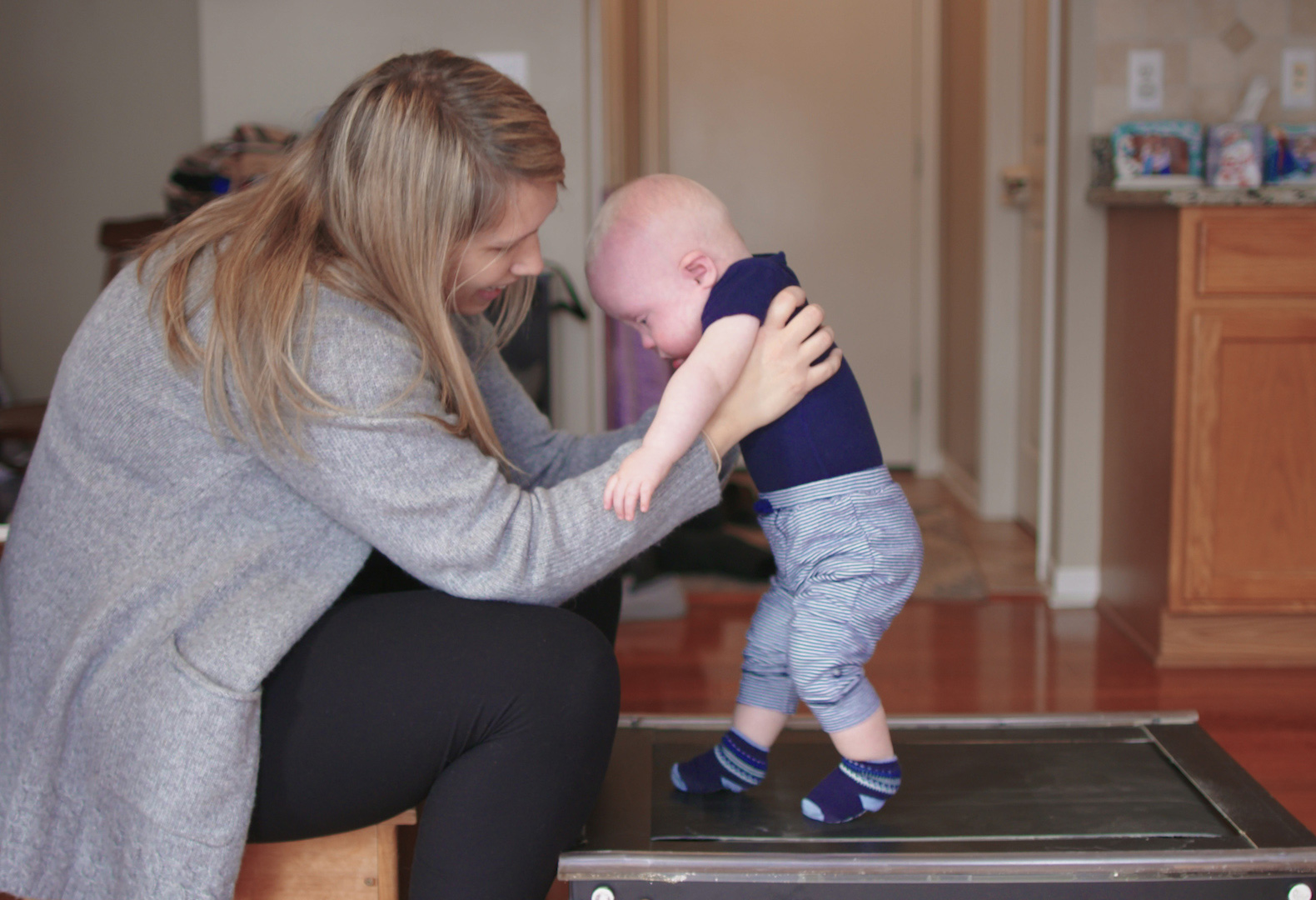 Walking is a facilitator of many other critical skills. Image credit: Eric Bronson, Michigan Photography

His research and findings grew out of the earlier basic science work of his wife, Beverly Ulrich, professor and dean emerita of the School of Kinesiology.

The success of the treadmills came through a partnership with Sam Carlin, owner of Carlin’s Creations in Sturgis, Michigan. Carlin helped design and produce the custom, tot-sized treadmills so that families, nonprofits, medical practices, schools and others could offer the treadmills for sale or rent. The treadmills are often used by multiple children, provided either by a special education advocacy group, a physical therapy office or other organization.

They can be used during appointments, but more often they are used at home and returned to an organization that loans them then passed on to another child once one has reached the critical milestone.

Later, Carlin’s Creations became one of many Michigan-based vendors that supply products and services to support the U-M Institute for Research on Innovation and Science. Launched in 2015, IRIS collects administrative data from more than 30 colleges and universities nationwide in an effort to better understand, explain and improve the public value of research.

There are now more than 400 miniature treadmills and their use has expanded to children with other physical disabilities, Ulrich said. 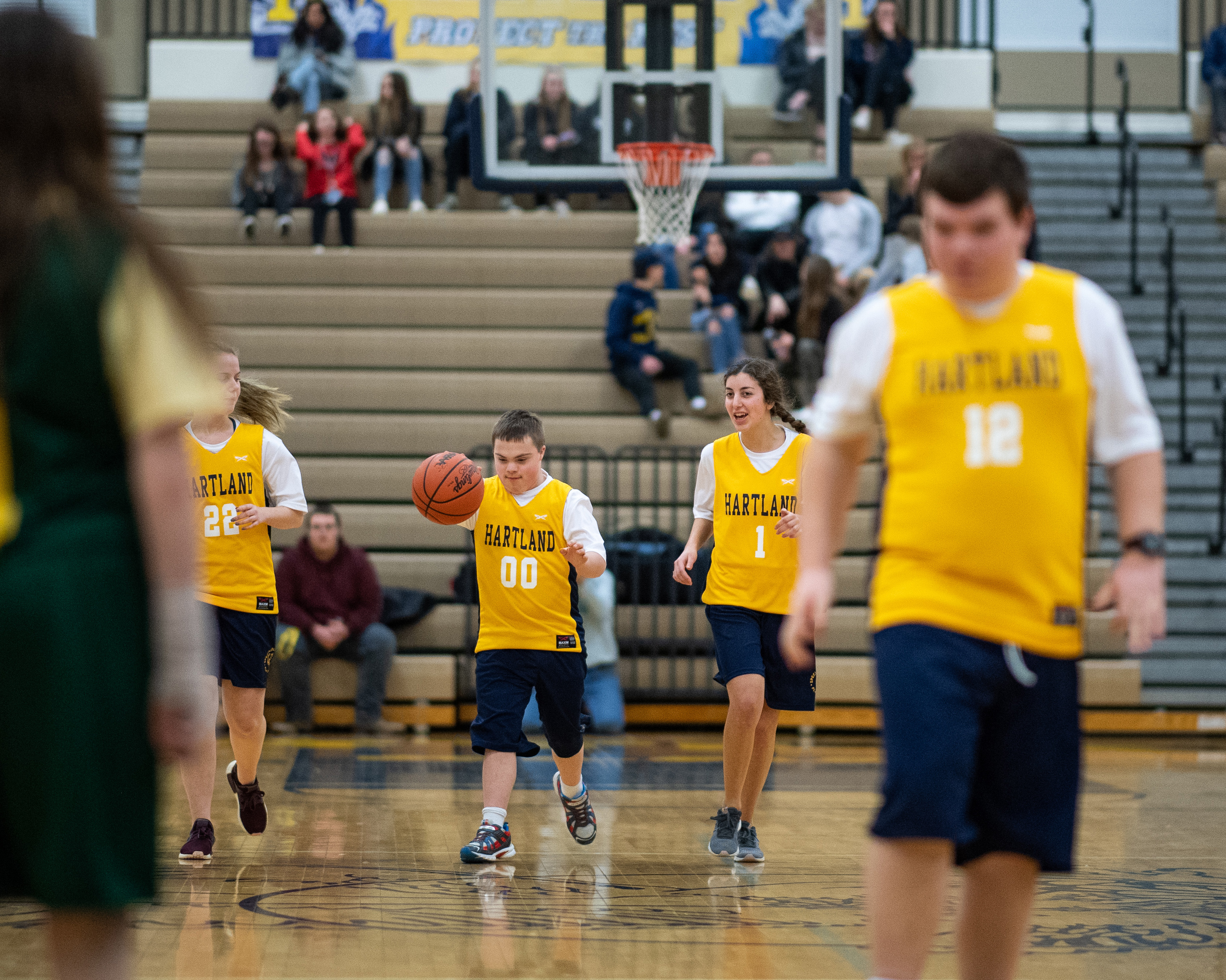 Jeanette and Jim Kurnick are among the hundreds of families grateful for the research and treadmill that helped their son Evan.

Evan, now a student at Hartland High School, learned to walk using one of the toddler-sized custom treadmill about 15 years ago. His parents visited U-M’s School of Kinesiology after “hearing about the work it was doing around treadmills and earlier walking for children with Down syndrome,” Jeanette Kurnick said.

Within days they were working with Evan on a miniature treadmill eight minutes a day, five days a week.

“I think that our son was blessed to be a participant in the program and to be the recipient of such tremendous work,” she said. “It has impacted his life.”

She said her family was fortunate to have U-M close by and involved in so much research around ways to enrich and ease the lives of people affected by Down syndrome and other conditions.

“It’s definitely successful and it also gives parents something they can get invested in and do it with their child, feel like they’re helping them,” Papenhagen said. “And absolutely it’s beneficial.”