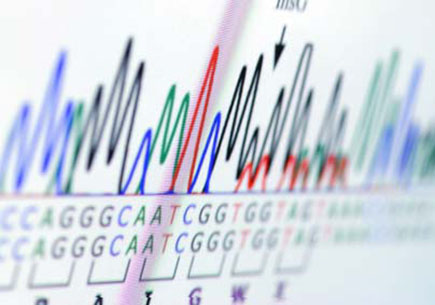 ANN ARBOR—University of Michigan School of Public Health researchers have developed a new method for identifying rare gene variants, which scientists now believe are more informative for human disease studies than the common variants extensively researched over the past few years.

The sophisticated method, detailed in the current issue of Nature Genetics, will allow researchers to study larger numbers of people to pinpoint genetic mutations that could be the culprits in disease.

“For the past five to 10 years, most genetic studies have focused on common variants, which were easier to measure. Over the past two to three years, it has become increasingly possible to study rare genetic variation, and we developed a method that allows this to be done across studies, rather than one study at a time,” said Goncalo Abecasis, the Felix E. Moore Collegiate Professor of Biostatistics.

The majority of genetic variants are extremely rare and cannot be studied individually. Even in a sample of 10,000 people, most variants will be present only in a single individual. Thus, to accurately study the consequences of these rare variants, scientists must group those that are similar and evaluate their combined effects.

Over the past two to three years, it has become increasingly possible to study rare genetic variation. Goncalo Abecasis

The method basically figures out key pieces of information that should be extracted from each study and shared centrally to allow researchers to answer questions like: “What happens to cholesterol levels when a specific gene is damaged?”

Abecasis said the ability to combine information across studies should speed up research on the rare variants, generating more leads that could result in faster drug development to manage and treat disease.

The software Abecasis and team developed combines the power of a number of tests and tools used in meta-analysis, which is an approach that allows researchers to study large sample sizes to determine patterns and contradictions.

“We were able to recapitulate the findings about the role of genetic variation in blood lipid levels. We did this by combining information across many very rare variants— something that most researchers thought couldn’t be done until recently,” said Dajiang Liu, a postdoctoral research fellow and first author of the paper.

Abecasis’ Lab has developed a number of statistical tools and computational methods for human genetic studies that are used worldwide. Applications of his methodology and use of his software programs have improved understanding of psoriasis, macular degeneration, diabetes, insulin resistance and heart disease, among others.