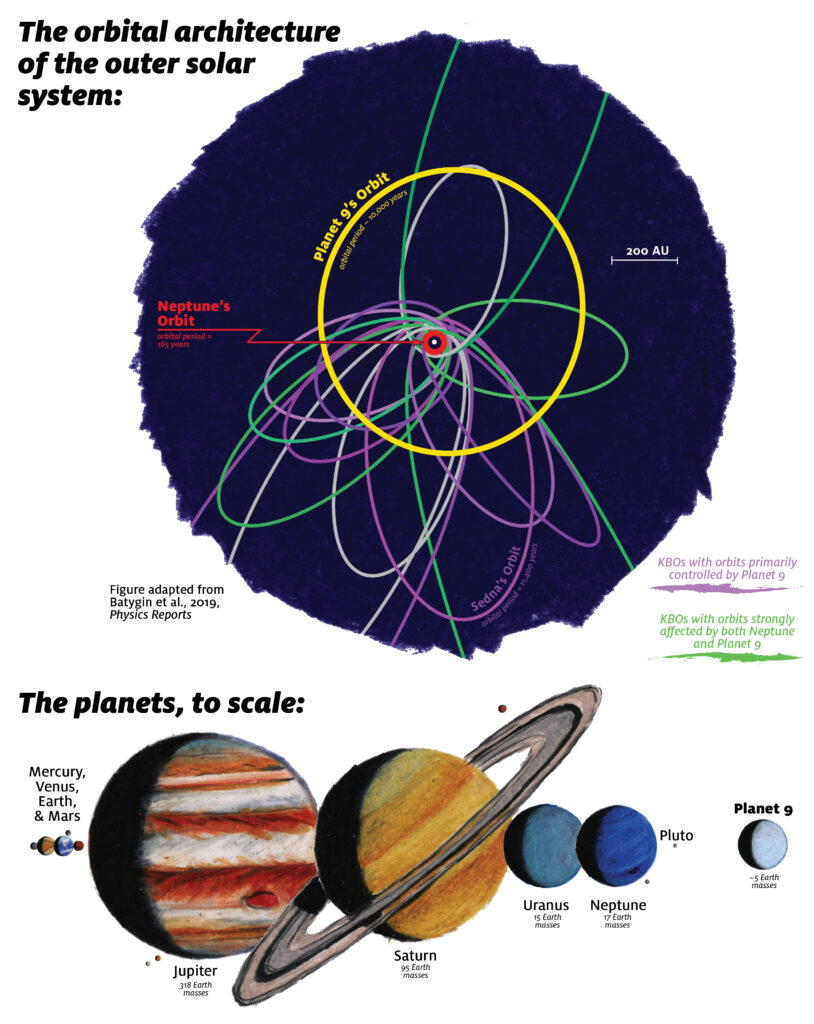 Orbits of the distant Kuiper belt and Planet Nine. Orbits rendered in purple are primarily controlled by Planet Nine’s gravity and exhibit tight orbital clustering. Green orbits, on the other hand, are strongly coupled to Neptune, and exhibit a broader orbital dispersion. Updated orbital calculations suggest that Planet Nine is an approximately 5 Earth mass planet that resides on a mildly eccentric orbit with a period of about ten thousand years. Image credit: James Tuttle Keane/Caltech.

ANN ARBOR—Seeing is believing, but when it comes to Planet Nine, complex calculations of space objects’ behavior, careful observation of orbital anomalies, and watchful observation of the region beyond Neptune will have to do for now.

“The strongest argument in favor of Planet Nine is that independent lines of evidence can all be explained by a proposed new planet with the same properties. In other words, there are multiple reasons to believe that Planet Nine is real, not just one,” said Fred Adams, the Ta-You Wu Collegiate Professor of Physics (and Astronomy) at the University of Michigan.

Three years ago, astronomers Konstantin Batygin and Mike Brown of Caltech hypothesized about the existence of a ninth planet in the solar system, beyond Neptune, that would explain why some objects in space, called “Trans-Neptunian Objects,” or TNOs, behave as they do.

Since then, astronomers have been busy gathering evidence of its existence. Batygin, Brown and Adams, along with doctoral candidate Juliette Becker from U-M’s Department of Astronomy, recently reviewed this evidence in the article “The Planet Nine Hypothesis,” published this month by Physics Reports.

“Although this analysis does not say anything directly about whether Planet Nine is there, it does indicate that the hypothesis rests upon a solid foundation,” said co-author Mike Brown, the Richard and Barbara Rosenberg Professor of Planetary Astronomy at Caltech.

Adams said he’s optimistic that in the next 10 to 15 years we’ll either be able to observe Planet Nine or have enough data to rule it out. In the last two decades, the number of discoveries of both new solar system objects and extrasolar planets have increased exponentially. For example, the four authors of the report have collectively co-discovered dozens of such objects and the rate of detections is well-positioned to increase.

“With its proposed properties, Planet Nine is right on the edge of being observable,” said Adams, adding that if we knew where it’s located in the sky, we could point a telescope in the right direction and see it. “But this is a very dim object in a very big sky. Since we don’t know exactly where it is, you have to survey the whole sky, or at least large portions of it, in order to find the planet.

“Over the course of the next 10 years we will have deeper and deeper—which means more sensitive—sky surveys. So I think by 2030 we will have seen it or will have a better idea of where it is. Of course, it’s also possible that by then we could also have alternate explanations for the observed orbital anomalies.”

For Becker, finding Planet Nine would help solve many of the solar system’s mysteries, including the origin of a rocky object called 2015 BP519.

“Planet Nine is a really good explanation for 2015 BP519—the physics works perfectly. However, until we see Planet Nine in an image and are sure it’s there, I don’t feel like we’ve truly solved the mystery of its origin,” she said.

“The presence of Planet Nine would beautifully and coherently answer several seemingly unrelated open questions about the solar system. I look forward to the day we either see it or rule it out so that we can conclusively answer these questions.”

Based on new models and extensive calculations presented in the review, the researchers estimate that Planet Nine has a mass of about five times that of Earth and has an orbital semimajor axis in the neighborhood of 400 astronomical units, making it smaller and closer to the Sun than previously suspected—and potentially brighter. Each astronomical unit is equivalent to the distance between the center of Earth and the center of the Sun, or about 149.6 million kilometers.