ANN ARBOR—For Latinos, believing in a spiritual power and finding comfort in religion may buffer the negative psychological effects of neighborhood violence, according to new University of Michigan research.

The results showed that witnessing and/or being a victim of neighborhood violence were linked to symptoms of depression and post-traumatic stress disorder. However, these associations were not found among teens who considered themselves to be highly spiritual. 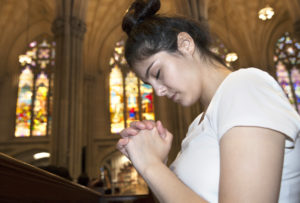 The study, published in the current issue of Youth & Society, used data from more than 200 9th-grade Latino students living in poor, urban neighborhoods in northeastern U.S. cities. Many students identified as Catholic (65 percent) and most (85 percent) reported being involved in religious activities, such as attending church services.

Students reported the frequency that they had been exposed to violent incidents in their neighborhood, such as being hit or punched, hearing gunfire inside or near their home, being chased by gang members or other individuals, or seeing someone stabbed with a knife.

Regarding questions about spirituality, respondents were asked if they believed in a spiritual power, found strength and comfort in religion, and felt close to God. Religious importance at home assessed how important students think it is for Latino parents to take their children to religious services.

“Spirituality may be especially protective because it represents an internalized motivation to find meaning and comfort in faith,” said Rosanne Jocson, one of the study’s lead authors and a recent graduate of the U-M Department of Psychology.

Religious importance at home and religious involvement were also protective for teens who witnessed violence. Jocson said that participation in religious activities may expose teens to supportive social relationships that can help curb depression when teens face severe and chronic neighborhood violence.