The last time the general public had the opportunity to see the “Plan of the Fort at De Troit” was in 1967 when it was offered for sale at Sotheby’s. Now it will be part of the University of Michigan’s William L. Clements Library collection.

Not knowing to whom the original was sold back then, former Clements curator Brian Dunnigan studied the photo included in the Sotheby’s auction catalog to write about this hand-drawn map for his book “Frontier Metropolis: Picturing Early Detroit.”

“This map was executed by noted surveyor and map draftsman William Brasier for General Jeffery Amherst in 1761,” said Dunnigan, now curator emeritus of maps, who is an expert in early Detroit, Mackinac, Niagara and 18th-century Great Lakes history.

“Comparing maps helps to understand the growth and changes taking place in Detroit. This map was drawn just months after Detroit was ceded from New France to Great Britain and depicts the fort that was later attacked by Pontiac and his warriors during the summer of 1763.”

The Great Lakes region was not well known to the British before the end of the French and Indian War (1756-1763) when the British vied with the French for control of colonial North America. Most up to date general maps of the Great Lakes area were printed in French. More detailed plans of specific places were produced manuscript, in small numbers closely held by French military or colonial leaders. With French capitulations, the British were able to obtain these large scale manuscript maps of newly conquered areas.

When British officers took possession of the French fort at the straits (Detroit) between Lake Erie and Lake Huron in November 1760, the French commander handed over his most recent plan of the fort. That French plan formed a basis for William Brasier’s “Plan of the fort at De Troit,” drawn in 1761 for use by the British commander of forces in North America.

“Most striking, however, is the inclusion of a small view of the fort from the west. This image of the fort sited on a gentle rise of land overlooking the river vividly captures what the British saw when they approached the fort for the first time to accept the French surrender and to begin negotiations with residents of the Ottawa (Odawa), Potawatomi, Ojibwa and Huron (Wendot) villages located around the fort.”

Pedley says that the area around the fort had long served as a gathering place for many indigenous groups, and both colonial powers understood the powerful significance of the place and indigenous presence in the fur trade. Prepared for military leadership, the Brasier plan had the potential to inform British planning for the Great Lakes region and the recognition and accommodation of Native Americans.

It will further enrich the treasure-trove of Detroit history held at the Clements, which is home to one of the most comprehensive collections of early American history in the world. The Clements holds several dozen plans of the town of Detroit, charting its growth from the early 18th century until 1900; a depiction of colonial Detroit in the papers of Gen. Thomas Gage; numerous manuscript collections of 18th- and 19th-century Detroit families; the papers of Gen. Jeffery Amherst; other maps by Brasier. 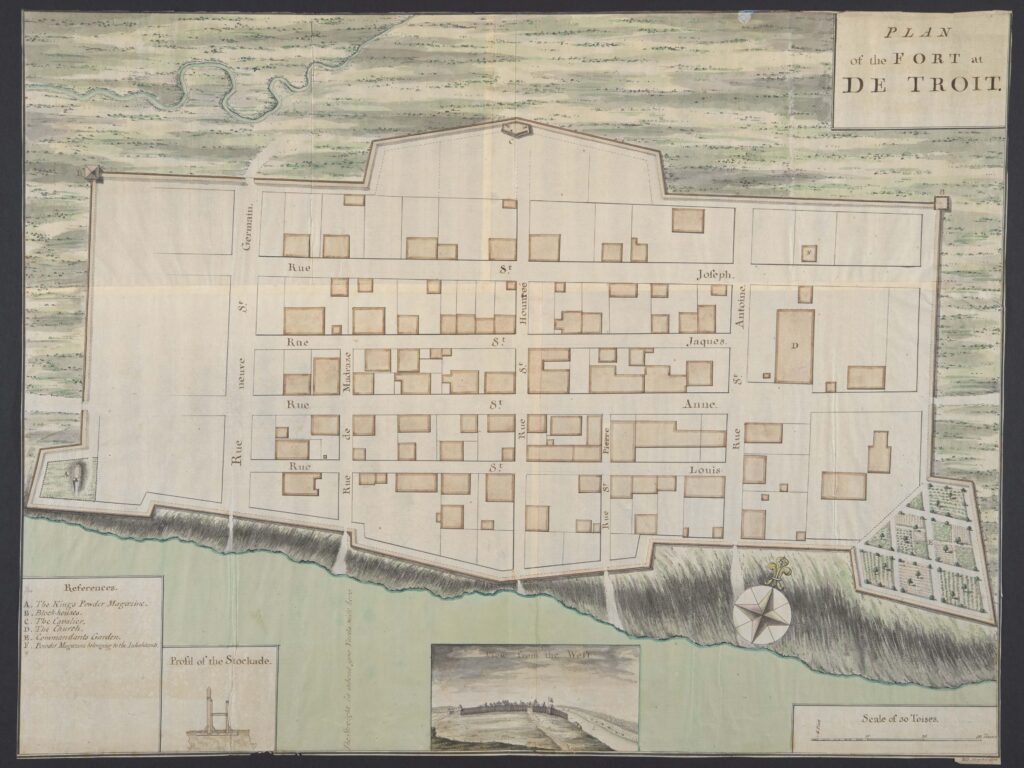 Digital facsimile of cartographer William Brasier’s “Plan of the Fort at De Troit,” (1761) recently acquired by the William L. Clements Library at the University of Michigan. Its key of References identifies the following locations: “A. The King’s Powder Magazine. B. Block-houses. C. The Cavalier. D. The Church. E. Commandants Garden. F. Powder Magazine belonging to the Inhabitants.”

Dunnigan speculated in “Frontier Metropolis” that this plan was produced in 1761 to help the British military assess matters of property ownership in the west end of the fort. At the time of that publication, his reference to it read “Current whereabouts unknown.”

When Paul Erickson, the Randolph G. Adams Director of the Clements Library, heard that the plan was once again available for purchase, he knew that it belonged at the Clements Library. The only problem was that the cost of the map would put a large dent in the acquisitions budget.

“This map is unique, one-of-a-kind,” he said. “Manuscript materials of any kind from before the Revolutionary War are rare. Items like this map, that can help bring researchers back to a specific time and place, are exceptionally so, and they’re priced accordingly.”

The Clements Library is launching a crowdfunding campaign to raise the $42,500 for acquiring this plan of Detroit. The initial preview of the map has generated so much enthusiasm that several donors have stepped forward to provide $20,000 in matching funds.

“Matching funds for this campaign means that every new donation will be immediately doubled to help in reaching our goal. Through crowdfunding, we hope anyone in the world passionate about the history of Detroit and the Great Lakes can have a hand in supporting this exciting acquisition,” said Angela Oonk, director of development at the Clements Library.

Erickson says that acquiring, preserving and sharing original primary sources for research and display is the core of the Clements’ mission.

“The Clements Library has always relied on financial contributions from supporters to help us acquire materials for the collections,” he said. “This support is more important than ever as we continue to build holdings that will make U-M a worldwide destination for research in early American history and culture.”