ANN ARBOR—The University of Michigan’s poverty and well-being map shows modest improvements across most of Michigan. 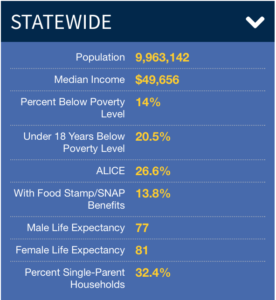 “The map shows a picture of gains statewide, but we know that significant challenges remain,” said H. Luke Shaefer, director of Poverty Solutions and associate professor at the Gerald R. Ford School of Public Policy and School of Social Work. “Looking across the county data we know that there are still a significant number of Michiganders who are experiencing disadvantage or scarcity.”

According to the latest American Community Survey, Michigan’s poverty rate of 14 percent puts it slightly higher than the national poverty rate of 12.3 percent and 35th in the nation—up one spot from last year. People considered poor had incomes below the poverty line—$24,600 annually for a family of four—in 2017.

The map, first released in 2017, streamlines an overwhelming amount of poverty and well-being data to better understand what’s happening in counties across Michigan.

The Poverty Solutions initiative at U-M developed the map to help policymakers, community organizations and the public understand the state of poverty in their communities.

Additional highlights from the map broken down by county include:

The data comes from the U.S. Census Bureau, the United Way, the Robert Wood Johnson Foundation’s County Health Rankings, and others. In addition to evictions, the map focuses on broad poverty and well-being ­related indicators, such as poverty rate, percentage of people on food assistance and life expectancy, to provide a snapshot of strengths and challenges in each county.

“Any one metric tells just part of the story,” Shaefer said. “Looking at a range of sources that shed light on various aspects of poverty and well-being gives us the clearest picture of where we can make progress.”

In addition to the data available on the map, Poverty Solutions has compiled more than 50 additional indicators publicly available.