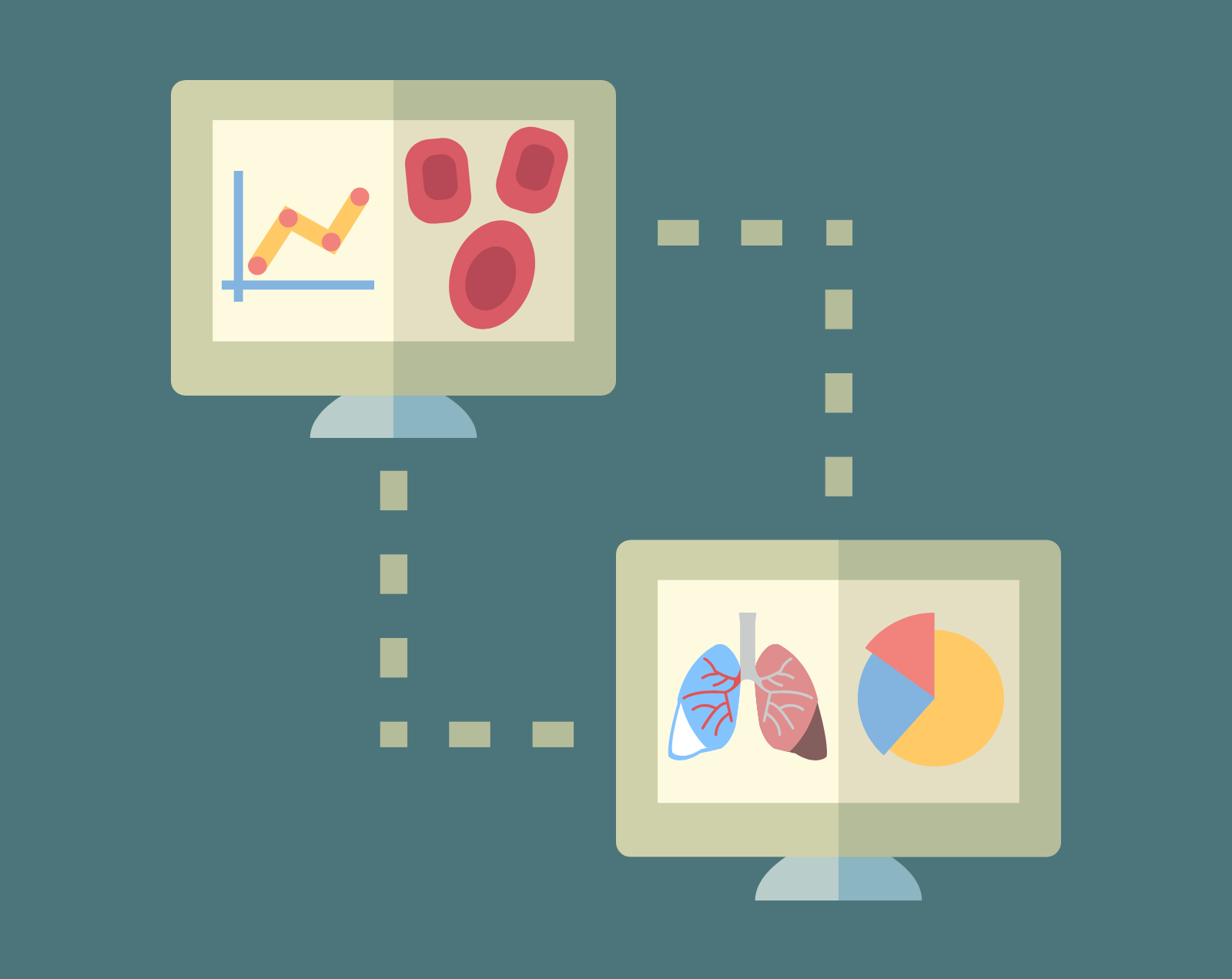 ANN ARBOR—Digital medical image files such as X-rays, MRIs and CT scans fill roughly half of all existing electronic storage around the world. And a University of Michigan startup has figured out how to mine and analyze this Big Data with technology that could make treatment choices incredibly precise for each patient.

Based in Ann Arbor, Applied Morphomics Inc. is a biomarker technology and development company that assesses body factors essential for delivering precision medicine. AMI’s Analytic Morphomics technology is based on discoveries from company founder Stewart Wang’s laboratory at the U-M Medical School.

This is the ultimate selfie. A patient’s body is their biological medical record and contains a tremendous amount of information that clinicians to date have not been able to comprehend.
Stewart Wang

The technology extracts thousands of digital biomarkers from a patient’s medical imaging files. From this data, physicians can pinpoint a patient’s condition, the state of their disease and the kind of treatments that might be most helpful.

“This is the ultimate selfie,” said Wang, U-M professor of burn surgery. “A patient’s body is their biological medical record and contains a tremendous amount of information that clinicians to date have not been able to comprehend.”

Wang and his team began by closely analyzing millions of digital images from CT and other imaging scans of more than 100,000 patients over an almost 20-year period. From this, they were able to define baseline information about gender, age and fitness. For example, they can see that 10 years ago, children had larger muscle mass and smaller fat mass compared to five years ago as a result of lifestyle changes.

June Sullivan, managing director of the University of Michigan Morphomic Analysis Group, who was part of the team that developed the analytics tool—the only one of its kind—said the images can be shared with patients in a way medical imaging is not normally shared.

“This is a bridge between the doctor and patient,” she said. “Patients often don’t get to see their insides nor do they get a chance to talk about what their risks are. With these morphomic images, you can show them their role in their condition and treatment.”

The technology was developed over the past 10 years with research funding of nearly $20 million, Wang said. His lab has used medical imaging scans to conduct automotive crash research to determine why some people get hurt in accidents and others don’t.

“What tends to get lost when we talk about AMI, and the inherent promise of this technology, is that there are real, concrete examples of need right now where this could be impactful,” said Drew Bennett, associate director of U-M Tech Transfer.

For instance, there are typically a limited standard set of physical models for conducting crash tests, such as child, adult and senior prototypes, he said. This technology allows researchers to more intelligently create a highly segmented set of profiles that can be used in simulation testing, clinical applications and forecasting.

Illness is the result of a process that involves both the patient and disease. The patient is like the soil in which a seed, or the disease, takes root. Doctors tend to treat just the disease. Morphomics allows a much better understanding of the condition of the patient, or the soil, so that health can be restored.
Stewart Wang

The normal distribution of body types is quite broad and has shifted over time. As a population, people are generally larger in both height and weight compared to 50 years ago. Having a more representative sample of the variety of body shapes creates a more intelligent base for research and benchmarking activity, Bennett said.

“The deep analysis of the variety and often less apparent nuances of our physical structure that have been developed by the Morphomics project is a phenomenally deep and sophisticated benchmarking reference,” he said. “The variety of applications for this collection of personalized structural human roadmaps is staggering in its potential applications.” 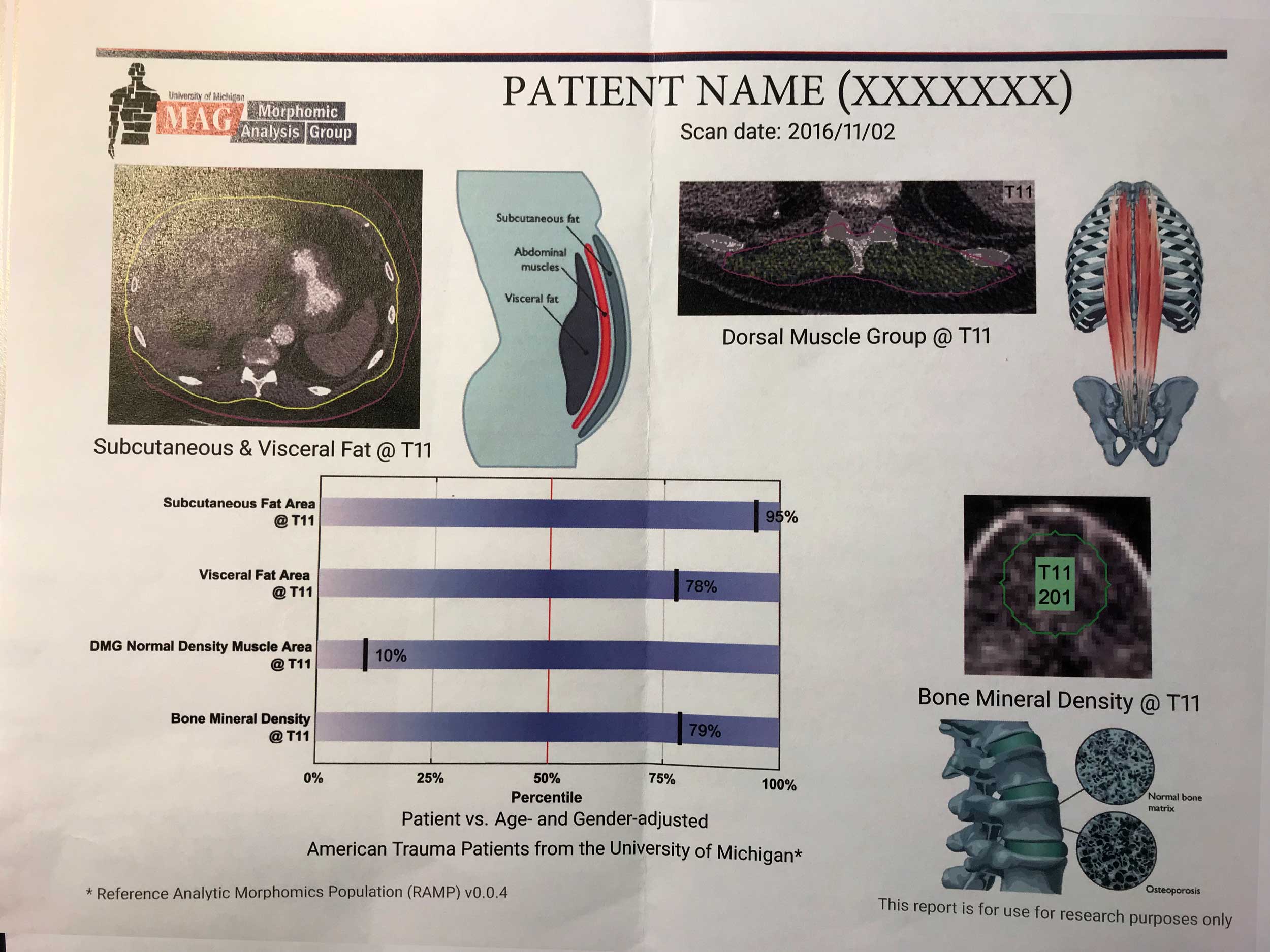 Muscle mass is important because it’s predictive of overall health. For example, by measuring the amount and quality of a patient’s core muscle, AMI can predict how well someone will recover from a major surgery. If the muscles are small and infiltrated with fat compared to an age- and gender-matched reference population, they can recommend a two-week routine of walking to build up the muscle and improve the patient’s rate of recovery.

“We’re very pleased to have the exclusive license to take this technology to make the next generation of these digital biomarkers available to the greater health care community,” Wang said.

The technology was developed by Wang, Sullivan and other staff in Wang’s lab—assistant research scientist Sven Holcombe, former resident Hannu Huhdanpaa and program director Carla Kohoyda-Inglis. It can extract granular data on organ size and condition; muscle volume and quality from psoas and other muscle groups; visceral and subcutaneous fat volumes, distribution and density; bone mineral density; and vascular dimensions and calcification.

Sullivan points out that the company is not selling software—it is selling a service. All analysis of digital images is processed by AMI. Its potential applications include custom device development, drug development, patient selection, drug trials, surgical decision making and disease management.

“Illness is the result of a process that involves both the patient and disease,” Wang said. “The patient is like the soil in which a seed, or the disease, takes root. Doctors tend to treat just the disease. Morphomics allows a much better understanding of the condition of the patient, or the soil, so that health can be restored.”