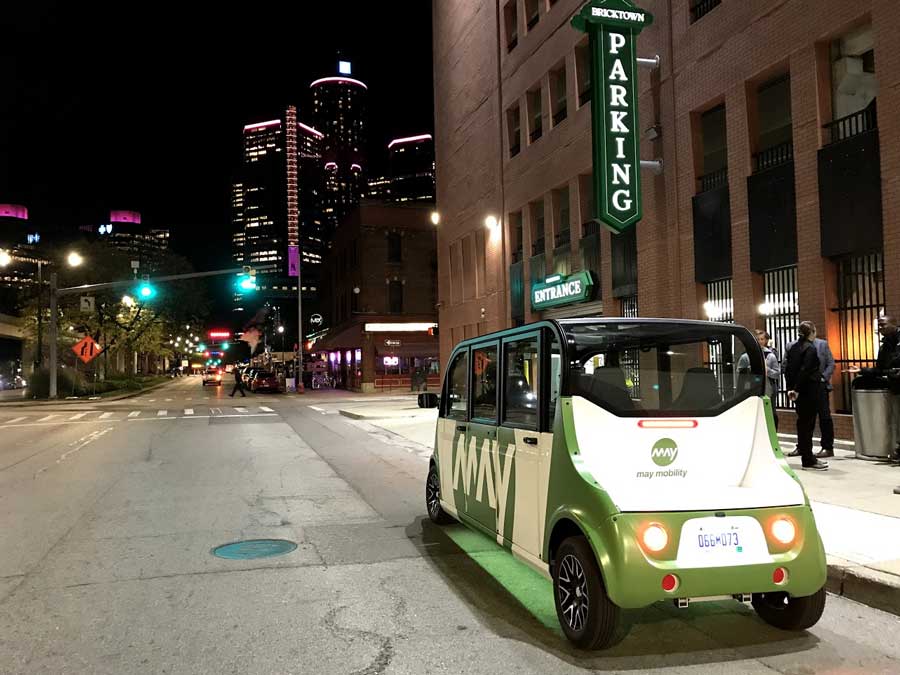 ANN ARBOR—While the Big Three automakers are still in the research and development phase, University of Michigan startup May Mobility already has tested its bright green-and-white driverless shuttles on public streets in downtown Detroit, and has ambitious plans for growth.

The company recently licensed five autonomous driving-related technologies from U-M that will help build out a fleet of autonomous public transit vehicles planned for business districts, corporate and college campuses, medical facilities and other communities across the country.

May Mobility has already attracted $11.6 million in funding from private donors, along with local and Silicon Valley venture capital funds such as Maven, Tandem Capital and Trucks Venture Capital.

“Getting our cars on public roads within our first months of operation couldn’t have happened without this relationship with U-M,” Olson said. “Our leadership in the autonomous vehicle space is driven by unique technology that gives us an advantage over our competition. It’s a good demonstration of how academia and industry can work together.”

Bryce Pilz, director of licensing at U-M Tech Transfer, said the average startup in Michigan takes over four years to raise its first $500,000 in financing, but May Mobility raised a significant seed round essentially at inception.

“Outside of the life sciences, this is far and away the most successful startup we’ve had at the University of Michigan in raising that first round of funding so quickly,” Pilz said. “That speaks a lot about Ed and his team.”

May Mobility plans to double its staff of 15 in the coming year, with openings in engineering (particularly robotics, software and systems engineering), customer development and operations. And Pilz said having these types of hot autonomous vehicle jobs in Ann Arbor instead of in Silicon Valley is huge.

“The autonomous vehicle field marries two sectors—the auto sector that started here and the tech space that is perceived as being on the West Coast,” he said. “Both hotbeds are competing to be the center of autonomous vehicle development. May Mobility—using cutting-edge tech and tapping into the heritage of the auto industry—can create a lot of good jobs and attract people to Michigan.”

Olson, who was formerly an investigator on Ford’s autonomous driving program and the co-director of autonomous driving at Toyota Research Institute, said that what sets May Mobility apart is that it’s not trying to go after the entire transportation market like other big companies in the space.

“That’s a great market, but we believe it could take five to 10 years for the technology to catch up,” Olson said. “We think that by starting with right-sized transportation in controlled environments, we can build a successful company, have vehicles on roads in the real world first, and turn on the spigot of data and operational knowledge that will help us improve our systems faster than the car companies still in R&D mode.”

Olson, on leave from his job at a U-M, is also director of the APRIL robotics lab, which stands for the five areas studied: autonomy, perception, robotics, interfaces and learning. The licensed intellectual property was developed in the APRIL lab.

May Mobility was named to follow APRIL on the calendar and also to connote a sense of happiness and new growth.

The licensed technology, in part, allows May Mobility to “extract higher-quality data out of the standard sensors everyone is using,” Vozar said. “We are grateful to have this IP so we can get to market faster.”

And that could put May Mobility in an enviable position.

“Every company is working hard to show that autonomous technology is real by getting it to work on a single fleet of vehicles as proof,” said Malek, who was a GM engineer and worked at GM Ventures. “Then the race begins to be the backbone of autonomous transportation and own the market. We hope the technology helps us to learn enough to own the next stage.”

Malek said the company would always use its technology as part of a fleet, targeting communities that understand how fleets of self-driving vehicles make short-distance travel safe, personal and effortless.

The company already has completed a pilot with Bedrock in Detroit running two shuttles for a week to take employees to parking areas. May Mobility is in discussions with the company on what comes next.

Olson’s goal is that “everyone rides May Mobility everyday. We want to be a critical part of future transportation systems. Our vehicles can be safe, increase access and be convenient.”