ANN ARBOR—As a University of Michigan doctoral student, Olivia Walch got a lot of attention for developing the Entrain app, which reads the body’s circadian rhythms to help people overcome jet lag quickly.

Now, as a postdoc, she’s branching out to sell her algorithms as an application programming interface, or API, that would be embedded in other pieces of software apps to serve various audiences such as shift workers, cancer patients and athletes.

“Our product is a suite of algorithms that I spent my Ph.D. understanding,” said Walch, who graduated last September with a doctorate in applied and interdisciplinary math.

“The applications go well beyond travel,” she said. “Entrain is the alpha version of what the company could be.”

Walch is part of U-M’s growing entrepreneurial ecosystem and will display the Entrain app at the 17th annual Celebrate Invention event 3-6 p.m. Oct. 18 at the Michigan League Ballroom. The annual event sponsored by U-M Tech Transfer highlights the 444 inventions reported by researchers in FY2017.

Her company, Arcascope, plans to develop some of the apps itself such as one for cancer patients.

“It’s like GPS for your body’s clock,” Walch said. “We can tell you based on your recent activity what time your body thinks it is.” 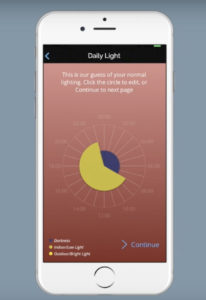 The project started small during her doctoral studies in mathematics, where her research was focused on using mathematical equations to predict the body’s circadian rhythms. She translated the research of her adviser, Danny Forger, and his student Kirill Serkh, into the Entrain app, which requires users to input what times of day they’re usually exposed to light and darkness, as well as what time zone they’re attempting to shift to.

The app then recommends a new schedule of light and darkness exposure to get the user on his or her new schedule as quickly as possible. “Dark” periods don’t necessarily mean the user needs to be sleeping, or even literally in the dark. Users may instead wear red-tinted sunglasses to block blue light, which most affects circadian rhythms.

Walch is working now with Marriott in Washington, D.C., to embed the algorithms into the hotel chain’s app as part of the Travel Experience Incubator, a 12-week program that supports startups working in the travel space.

“It could potentially control the lights in your hotel room based on your circadian rhythms,” Walch said. “It’s the dream to be able to work with a big company and have access to their resources while at the same time provide value to them.”

She found out about the opportunity from Kate Remus, a mentor-in-residence at U-M Tech Transfer. She’ll explore the circadian rhythms of athletic performance next, thanks to a $200,000 grant she received earlier this year from the U-M Exercise and Sport Science Initiative.

U-M Tech Transfer also partially funded Walch’s postdoctoral research on her technology after she graduated last September.
“It boils down to people thinking it’s just sleep. It’s so much more than that,” Walch said. “If you take care of your circadian rhythms, you’ll be able to perform at your peak in more hours of the day.”

She first became interested in circadian rhythms as an intersection of her interests in mathematics and biology.

“A lot of the human body is hard to model because it’s messy. The clock is remarkably clean,” she said. “It’s mathematically beautiful.”

Walch is applying for a National Institutes of Health grant to study the impact of circadian rhythms on the effectiveness of medical interventions for cancer patients. She’s also mulling applications for shift workers, who she described as “chronically jet-lagged.”

We don’t generally think of light as a drug, but Walch said we should.

“It absolutely has a chemical effect on your body, and we can now track and predict that effect through math,” she said.