Voting counts: How U-M grad students answered the question ‘Did you get my ballot?’

A soft autumn light warms the township lobby, and streams past the plexiglass divider at the public counter to Susan McCullough’s cubicle just beyond. The deputy clerk in this northern Oakland County community with more than 17,000 registered voters wears a stars and stripes mask as she processes requests for absentee ballots.

It’s the first presidential election since Michigan voters approved a 2018 proposal to vote by absentee ballot without stating a reason. Add in the coronavirus pandemic, and there’s been a huge increase in ballot requests, inundating clerk’s offices as they work long hours to keep up. A lot of their time is spent answering phone calls from voters wanting to know if their ballot has been sent or received by the clerk. 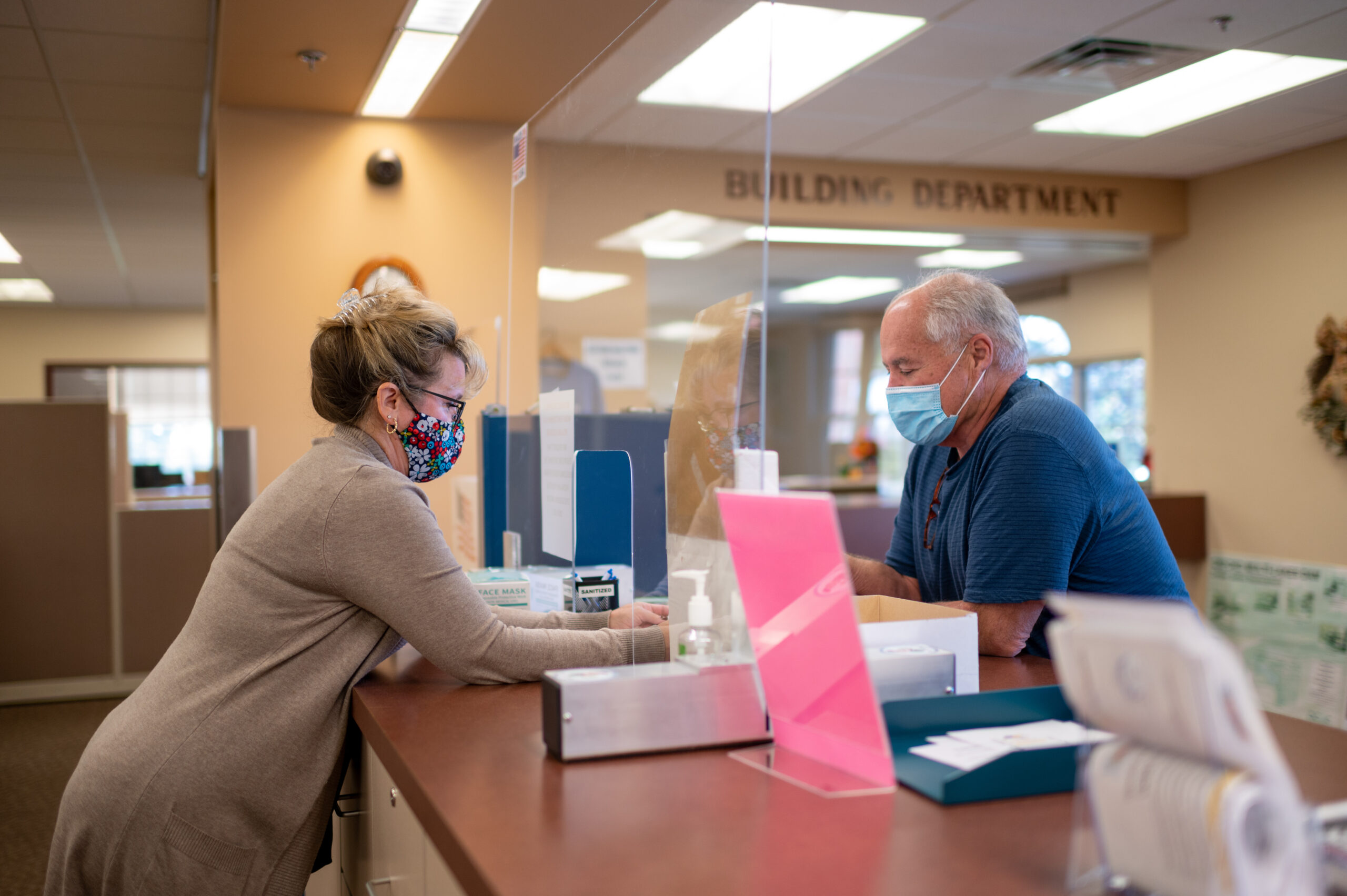 McCullough, who’s worked in the clerk’s office for 30 years, said that 43% of those voters are going absentee this year, more than double the 21% who voted that way in the last presidential election. And that’s put a strain on the township’s staff of two full-time and one part-time workers.

“We have the same number of employees, but twice the workload,” she said.

University of Michigan graduate students at the School of Information worked this summer on a pilot project to streamline the process at four municipalities in the state: Oxford Township, Ferndale, Bay City and Northville Township. 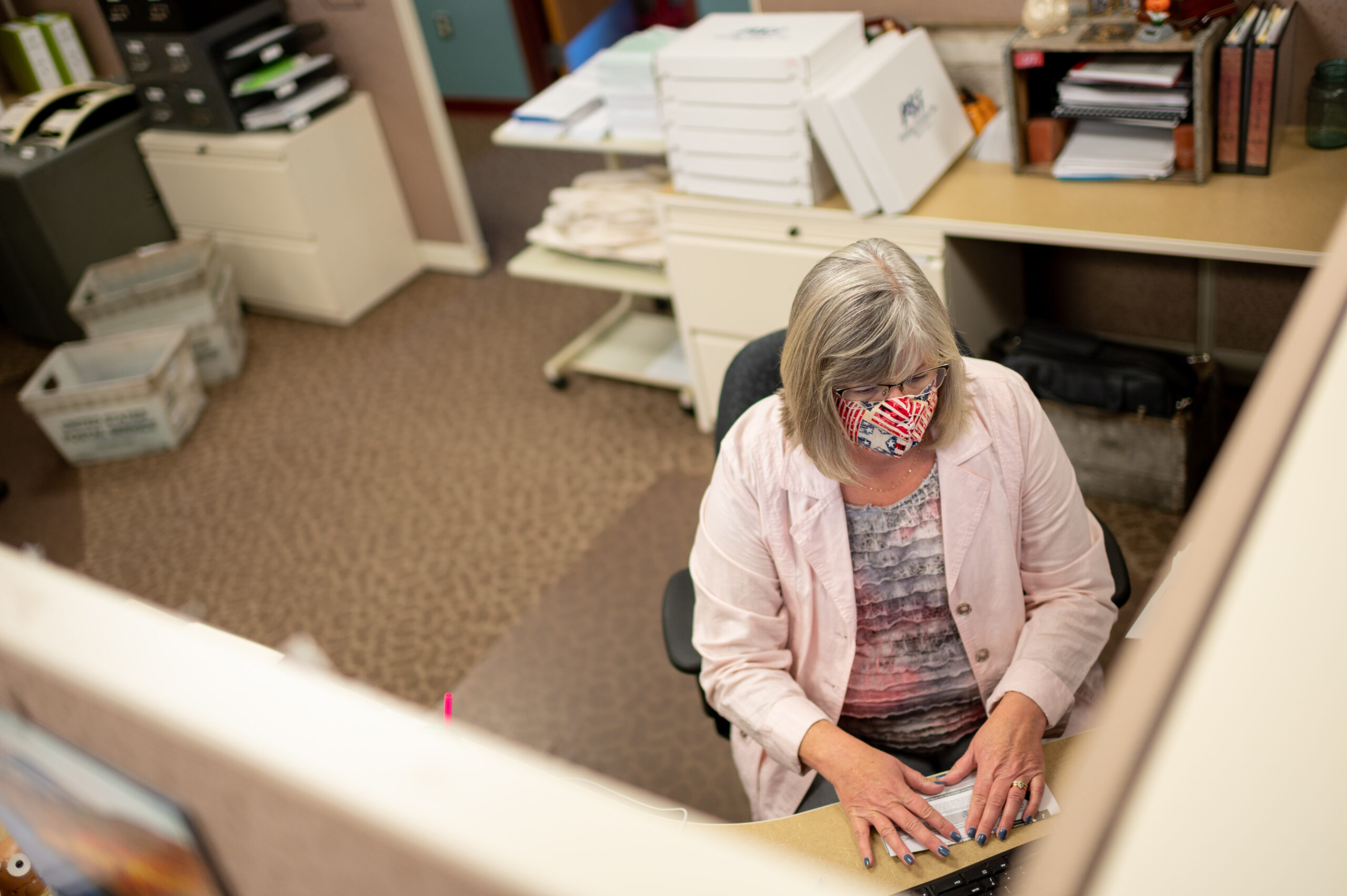 Part of the Citizen Interaction Design program, students worked with the Secretary of State’s office. As the team interviewed some of the 1,500 township and city clerks across Michigan, they kept hearing the resource challenges offices faced with extraordinarily high demand for mail-in ballots.

Using a process pioneered by Nick Sexton and Steve Gerhart from the city of Ann Arbor, the team worked with municipal IT departments to create and pilot an automated email notification system. As clerks update information in the statewide Qualified Voter File about ballot status, emails are automatically sent to voters in those cities and townships.

“If they have provided an email address, they’ll receive an email stating, ‘We received your ballot,'” McCullough said.

Voters can also check on their ballots via the Michigan Secretary of State’s website, but just receiving an email can be easier for some.

“The people love it”

And the system gives voters in those communities peace of mind amidst a turbulent election season, McCullough said.

“The people love it. Especially now, because there’s so much out there in the media about your ballot might not be counted,” she said. “People don’t understand that we don’t just go, ‘Oh, the signature doesn’t match. We’re not counting that one.’ We’ll call them. We’ll email. We’ll send them a letter. We can contact them and tell them it doesn’t match.” 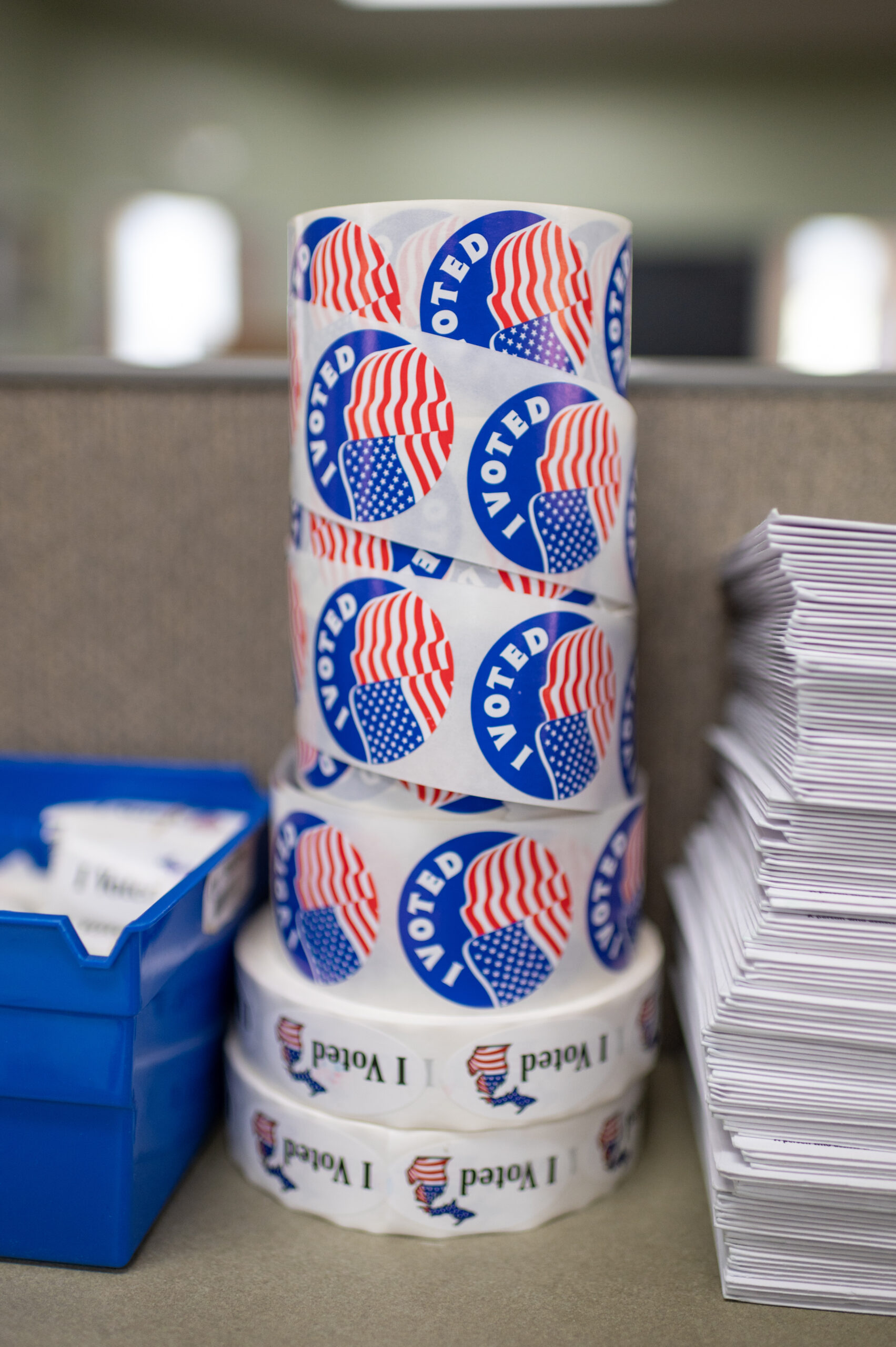 The email was very reassuring to Jack Curtis and his wife, Diana, who turned in their absentee ballots in the box outside township offices. Jack Curtis, a township trustee running unopposed for supervisor, said he received an email within two days indicating their ballots were received.

“At this time in our history, we have been confronted by a lot of emotional-driven anxiety. This removes that anxiety,” Curtis said of the email notification. “When we can say, ‘We have received your ballot,’ I’m not wondering if it’s sitting in the post office. I’m not wondering if it was stolen out of the drop box. I know it was received.”

And in Ferndale with more than 16,000 registered voters, absentee ballots requests are up fourfold, said Jordan Smellie, elections specialist. The automated email notifications have been well-received there.

“Voters are replying to these emails, and they’re saying, ‘Thank you. You have no idea how valuable this is. I used to wonder. Now I don’t have to. Thanks for implementing this,'” Smellie said. “The U-M students really wanted this to serve our voters, and it was neat to be reminded that folks in my office are not the only ones who are really dedicated and excited about advancing democracy and making it work better in the 21st century.”

Sally Marsh, director of special projects for the Michigan Department of State, said the tool holds a lot of promise and could potentially be used by more clerks throughout the state in future elections.

“For so many Michigan voters, this is a new way of voting: voting by absentee ballot. Voters deserve to have confidence that their ballot will be counted,” Marsh said. “So it might sound like a small thing, but in a year when clerks are rising to the challenge in just a myriad of ways, it’s great when there can be folks who are standing by and ready to provide real and actionable solutions that make their lives easier and affirm for voters … that voting and voting by mail is more secure.”

Setting up a solution

The School of Information graduate students who worked on the ballot notification email were Lauren Trimble, Joshua Tooker and Michael Payne. By adding code to the municipality’s email infrastructure, they were able to pull Excel reports from the statewide voter database and email voters en masse directly from those reports for much quicker responses. 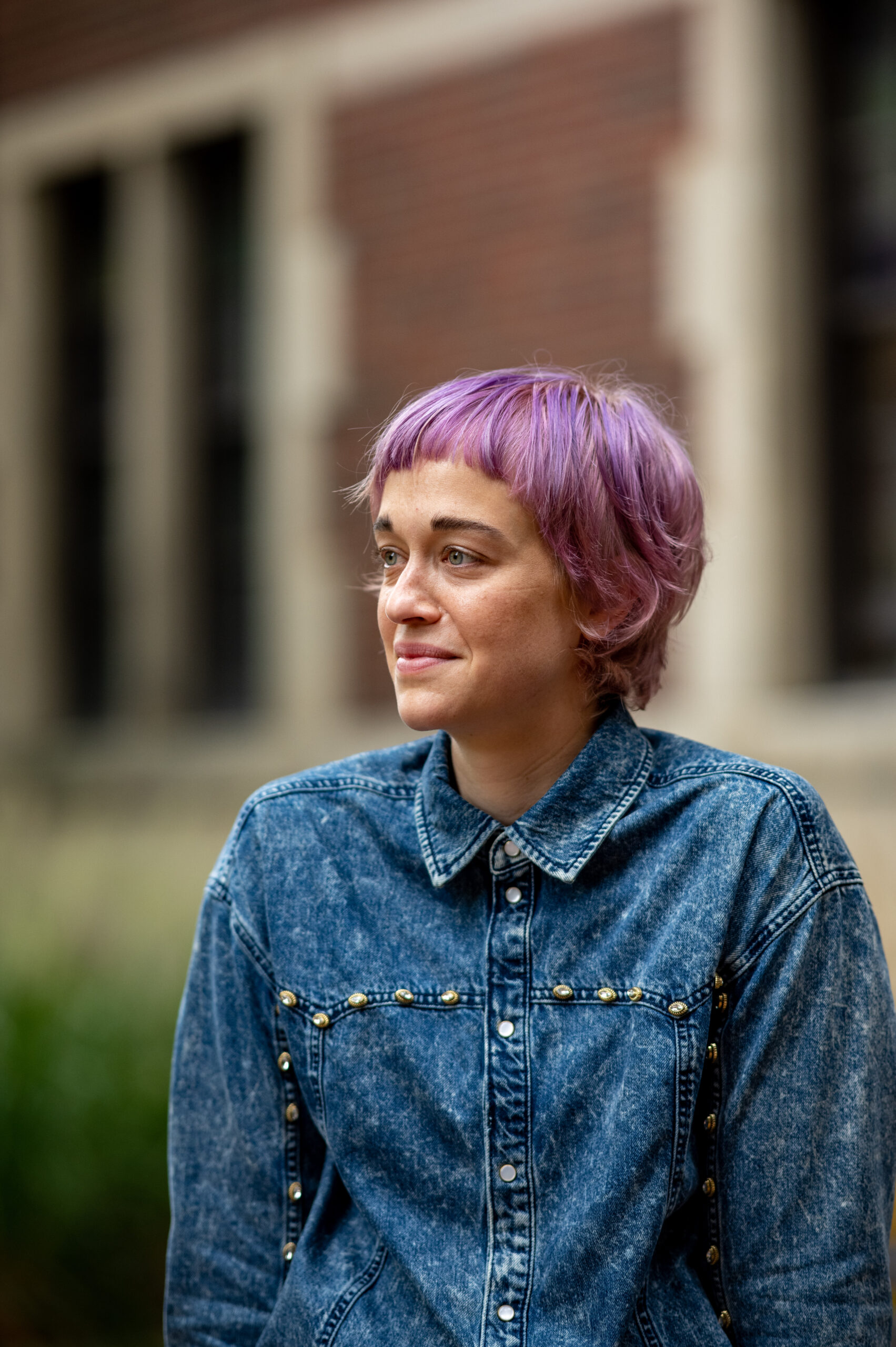 “I have to say that talking to the clerks just gave me nothing but a lot of faith in the system.” Trimble said. “You have a group of people who are working extraordinarily hard for the good of Michigan’s democracy.”

She said that one clerk she knows works 70-80 hours a week during election season, but still made time to support the students in their project.

The team navigated each municipal system’s IT department to determine how to restructure code to start the automated email response process.

“So we would be on the phone for him for maybe two, three hours, just trying to understand the workflow and break down the code in a way to where we could get it to work specifically for each clerk,” Payne said. “I feel like we’ve set up a solution. It was a collaborative effort with the city clerks that we worked with, as well as the team to try to come up with a way to give voters more information and also a peace of mind.”

Tooker said that one of the most challenging aspects of the project was working across the different types of technology and infrastructures employed by each municipality.

“A lot of what we had to do, especially early on was to understand the different constraints of each scenario and then help customize the program to integrate with existing infrastructure,” he said. 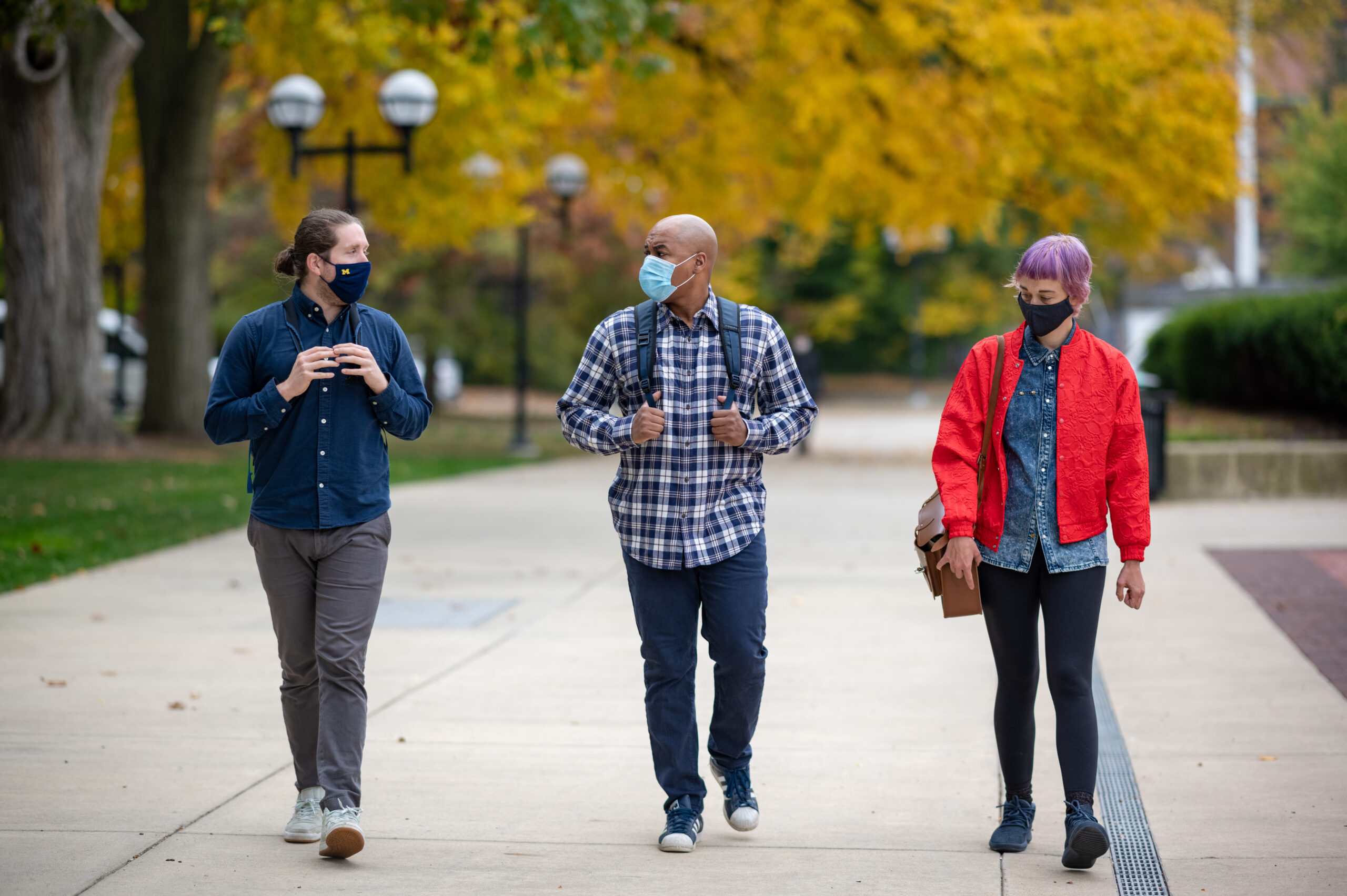 Tooker said the team had its own strengths that came into play on the project. He had more experience in building roadmaps to implement the program with municipalities, Payne was strong at building relationships with the communities and sharing information that made sense to them on technical and nontechnical sides, and Trimble had an election background that proved very useful.

“Some clerks were telling us they were spending 10 to 20 hours a week on the phone answering questions about ballots,” Tooker said. “Being able to give them time back by sending automated email notifications to address some of these very specific and common questions related to absentee voting enhanced transparency for constituents and really gave the clerks added flexibility and time back in their weekly schedules that allow the clerks to meet the needs of their community on an even greater and more meaningful level, which ultimately, we hope, will build greater trust in the long run.”

Marsh, from the Michigan Department of State, said that the students brought everyone together to have conversations, identify challenges and then brainstorm solutions.

“I think it’s exactly the kind of contribution that students and people outside of the day-to-day of operating government and administering elections can make,” she said.

Scott TenBrink, the civic engagement program manager at the School of Information, said the students’ role was to connect people to the opportunity to vote and increase access through information systems and tools. The students often take unique approaches to looking at the way government interfaces with citizens.

“One thing I’ve heard multiple times from partners that we work with is that this has changed the way we think about the work that we’re doing,” he said. “I think that our students come into these civic programs with a list of skills that they’ve kind of rehearsed in a classroom, but never applied to a real-world setting. And local government is probably one of the places that has the most chaos, political influence and frustrating obstacles.

“And at the same time, they have people who are passionate about accomplishing the goals that they’ve set out for the public to make a difference in the world. So being exposed to those things, I think really changes our students’ perception of the value of the skills that they have and the challenges that they’re going to face in the real world when they start work and hopefully get involved in civic information projects.”

That’s certainly true for both Payne and Trimble, who said the project made them want to continue this kind of work after graduation.

While the project started out looking at how to increase voting for youth populations, it ended up with “the very deep practicality of the working days of the administrative
staff, the people who run the elections. And that’s really where I see the most value,” Trimble said. “And that kind of connects to the career that I hope to go into … I would like to be the person who goes into especially resource-strapped government agencies and helps make their lives easier.”