World’s most fuel-efficient vehicles to race in Detroit 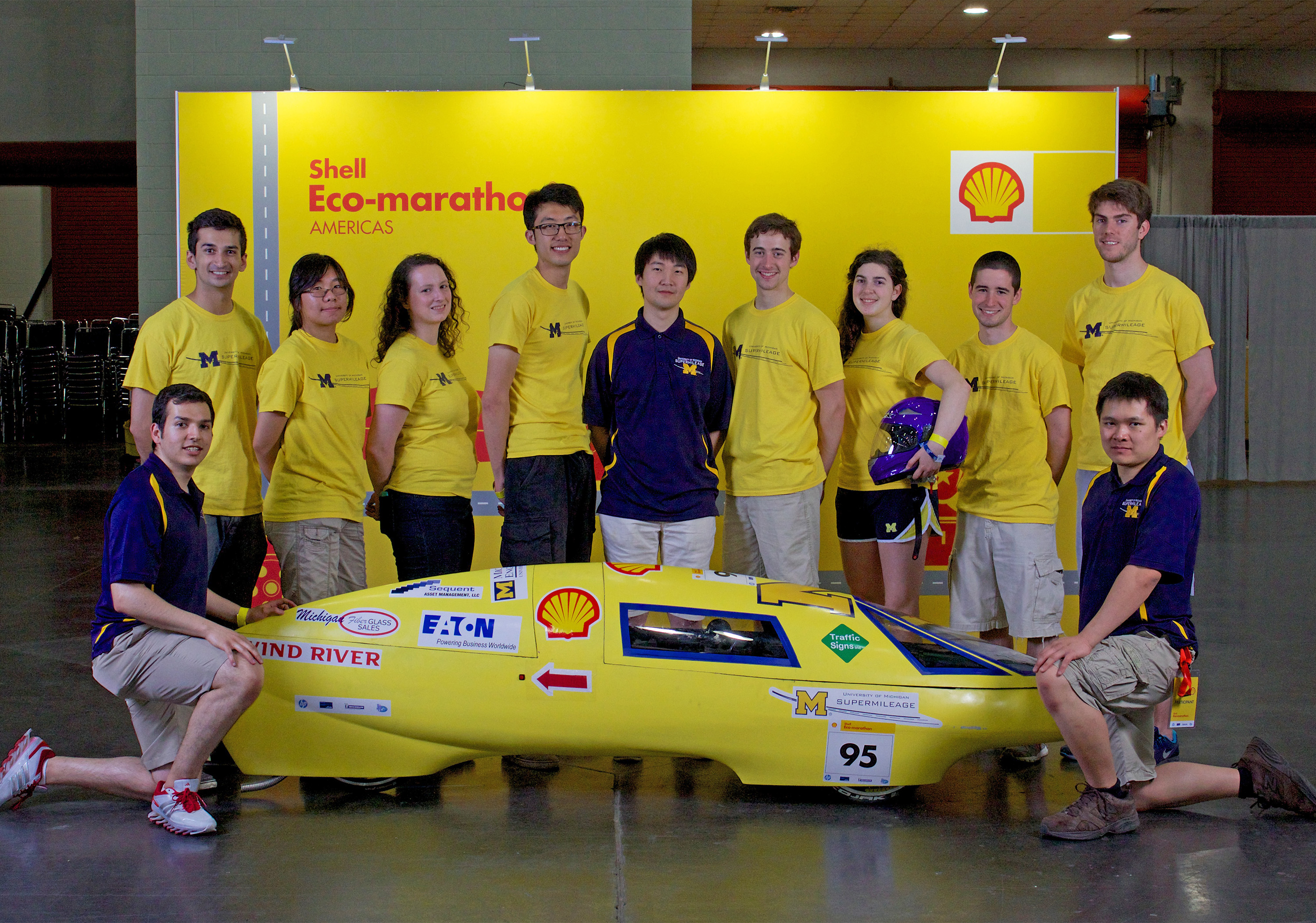 Taken at the 2014 Shell Eco­Marathon, the U­M Supermilage team poses with their vehicle. Image courtesy: University of Michigan Supermileage TeamANN ARBOR—In a torpedo-shaped one-seater powered by a lawnmower engine, a team of University of Michigan students is aiming for a fuel economy of thousands of miles to the gallon.

The U-M Supermileage Team will compete in the Shell Eco-marathon, held for the first time in Detroit April 9-12.

The contest, which started as a wager between two engineers in 1939, has since gone global, attracting engineering students from around the world who aim to design, build and drive the world’s most energy-efficient vehicle.

The U-M team is one of more than 130 competing. In all, more than 1,000 participants from North and South America are expected to race. 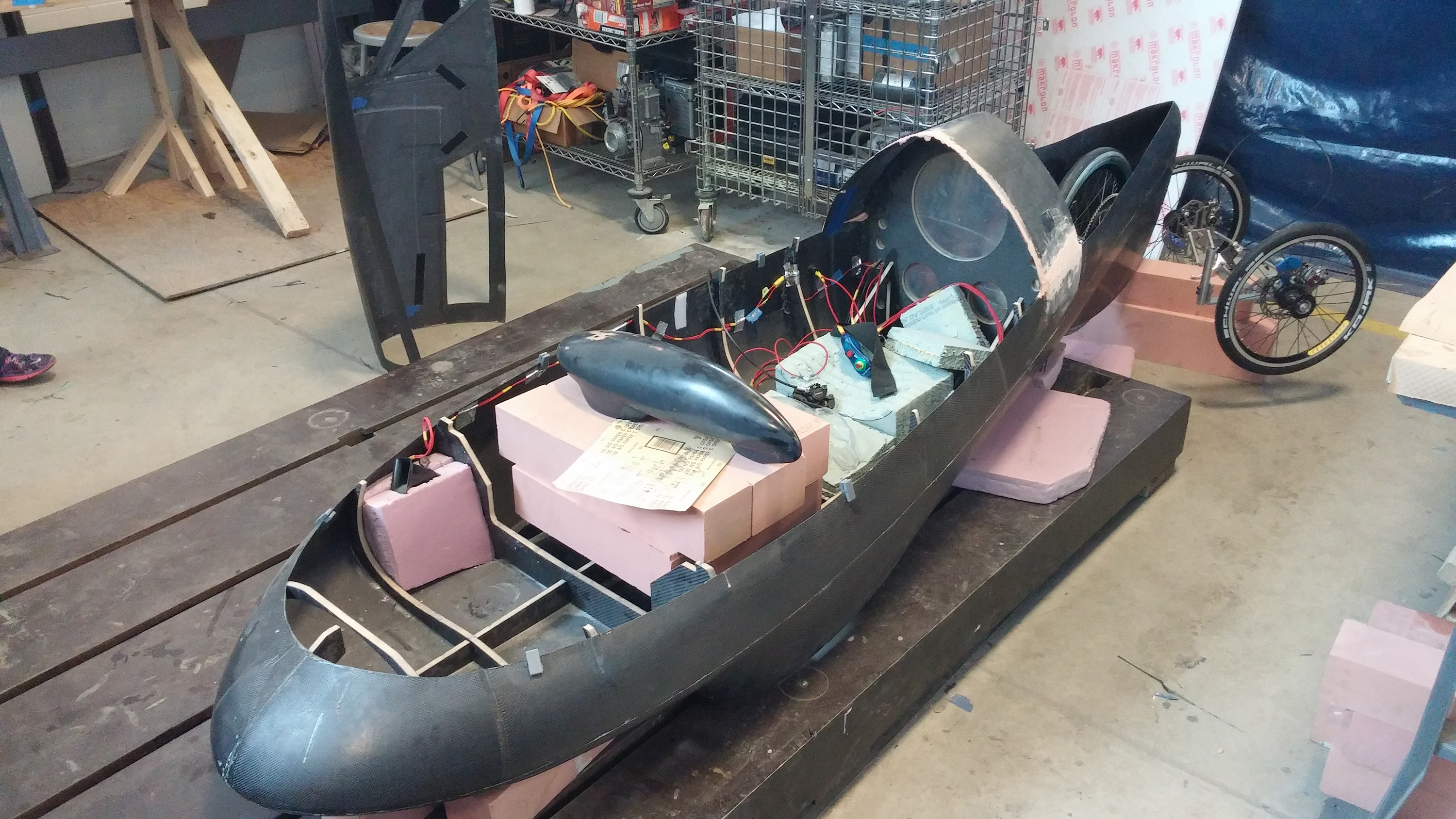 The carbon fiber body and exposed cockpit of the team’s vehicle, under construction inside the Wilson Student Project Center. Image courtesy: Supermileage Team“When I first joined Supermileage as a freshman trying to find my way, I quickly began to realize the importance of mission we have as a team,” said Morgan Freeby, a student in industrial operations engineering. “Not only is it important to achieve sustainability— especially in today’s world—but I think the competition itself is important. Anything that gets students excited and actively working on real world problems is something that people need to be a part of.”

The Michigan team’s aerodynamic carbon fiber shell is powered by a modified Honda GX160 lawnmower engine. Based on a rigorous computer model and optimization program, the team predicts it will achieve 1,500 miles per gallon. 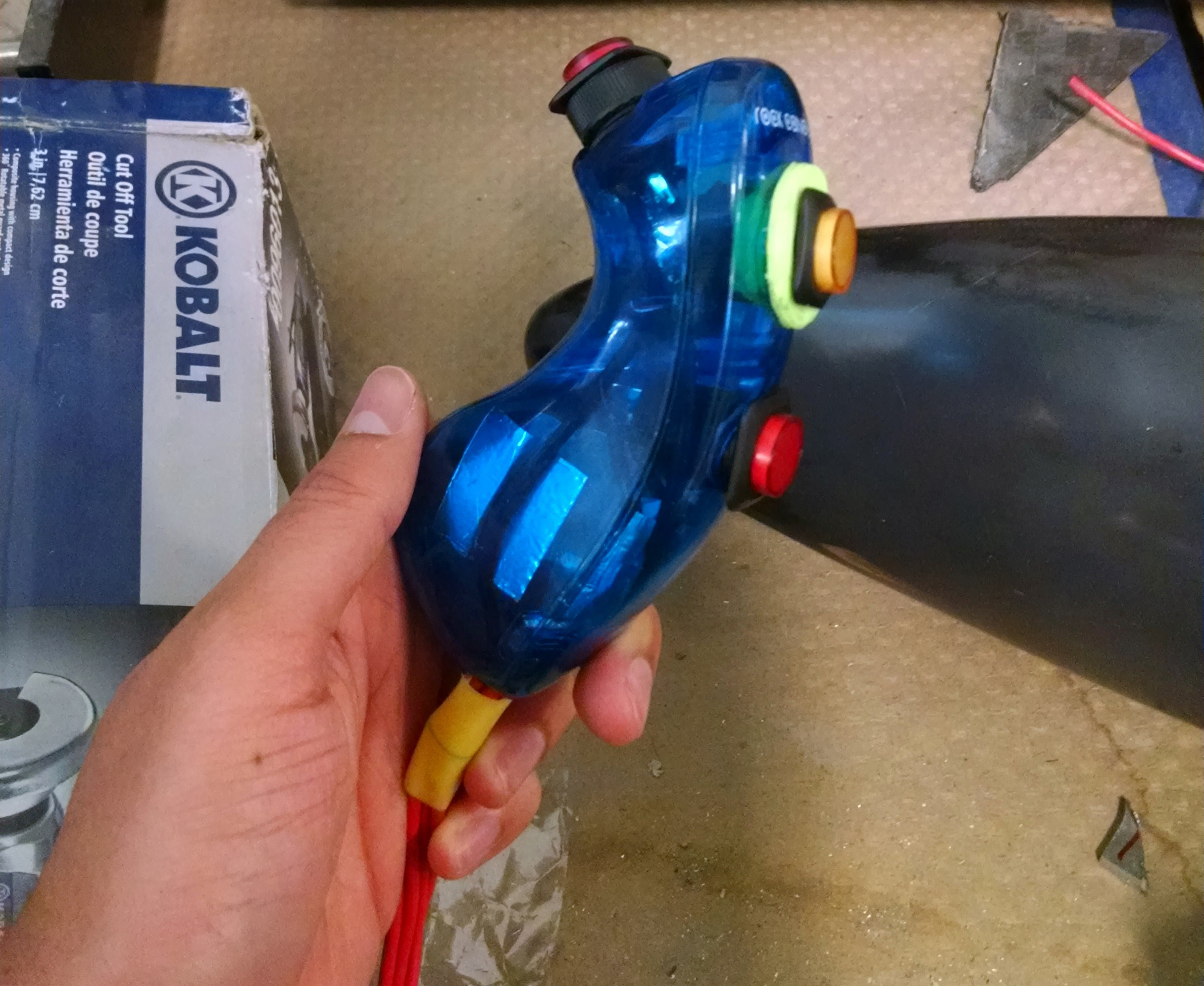 A modified Nintendo Wii Nunchuck will be used by the driver to help control the car in the 2015 Shell Eco­Marathon. Image courtesy: Supermileage TeamA new feature of this year’s vehicle was inspired by the world of video games. A handheld Nintendo Wii “Nunchuk” controller can be used by the driver to control the car. It’s not the steering wheel. A different joystick serves that purpose. But this one replaces a series of buttons that used to be attached to the vehicle. The Nunchuck holds the starter, the kill-switch and another that cuts the engine if the controller leaves the driver’s hand.

“It gives the driver more freedom, because the buttons aren’t rigidly attached to the side of the vehicle,” said Agney Deshpande, race strategy lead and a student in industrial operations engineering. “The driver can see and access the switches easily from any position.”

Though the team has competed in four contests since its founding in 2010, they’ve finished just once, experiencing setbacks such as design inefficiencies and engine trouble.

“This year, we are going in as a more humble team,” Deshpande said. “We want to prove that despite our issues with vehicles in the past, we can show that we can come together and produce a vehicle to be proud of. Our strategy is to race a robust, reliable vehicle that we can run successfully and repeatedly. We will use this year’s race to take analytics that will help with smarter designs for future years.”

The Shell Eco-marathon is partnering with the Henry Ford Museum and other Detroit-area businesses to involve others in the push for innovation in fuel economy.

The U-M team worked with several local companies including Ford, Michigan Fiberglass Sales, Pi Innovo and Eaton Corp. Entirely student-led, members come from the College of Engineering; College of Literature, Science, and the Arts; and the Ross School of Business.

Now five years old, the roster has grown from only six members to more than 30. The multidisciplinary team is working toward the goal of achieving 3,300 miles per gallon.